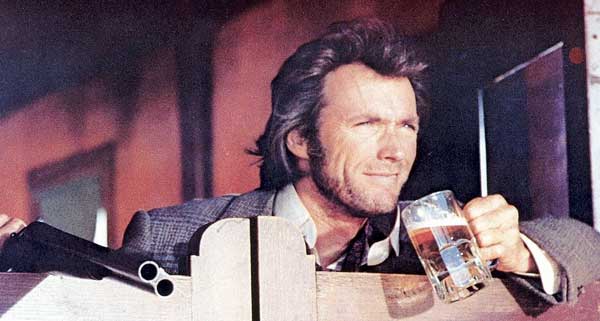 There are a lot of interesting things about JOE KIDD, the least being the movie itself.

This is Clint Eastwood at the peak of his early stardom: ruggedly handsome, aquiline nose, velvet rasp, thick shock of dirty blonde receding hair, three-day growth to emulate Leone’s Italian spaghettis that made him famous, wisecracking and head-cracking all over the New Mexico desert. He is a towering presence in the movie, that without him, would be as unimaginative and confused as the people who cast John Saxon as a Mexican.

Saxon is revolutionary leader Luis Chama, who storms a courthouse with his tryhard Spanish and (real Mexican) henchmen in the small town of Sinola, New Mexico, and burns land deeds owned by white prospectors in front of a judge, proclaiming “his people” are taking back land that rightfully belongs to them.

And worst of all, we can’t figure the diluted revolutionary message. At first, Chama is righteously struggling for land reform, ruthless in his principles: “It doesn’t matter how many of these villagers die as long as the revolution succeeds!” Yet by the end, Kidd convinces Chama to take his grievances to court for “a fair trial.” That would be the same crooked American courts that granted land deeds to white folk over the rightful ownership of indigenous peoples. I’m sure the courts would grant Chama leniency after his insurrection and failed land takeover.

Though Chama is originally painted as a Che Guevara-type, this is a fantasy resolution that only White America could conceive; that all its indigenous peoples behave this way. On AMERICA’S terms.

For Clint fans, this film is a monumental example of Eastwood doing all those outlandish things only Clint can get away with in a Clint Eastwood movie; the types of things that make schoolboys grow up idolizing the laconic, lanky super cowboy:

You gotta be kidding! No he ain’t. “Want some more?”