During JOE VERSUS THE VOLCANO, Tom Hanks’s head took out a restraining order on his hairstyle. His head won the case, which is why halfway through the film, Hanks sports a halfway decent ‘do – the old hairstyle finding a home on Whitney Houston’s head, of which Houston is still unaware. 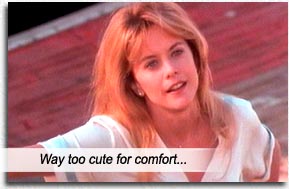 Diagnosed with a “brain cloud” which leaves him only months to live, Joe Banks (Hanks) is conned into leaping into a volcano to appease an island god. Under this surface premise, there is political intrigue and other such overwhelmingly inane minutiae – purely McGuffin, as the film stabs at philosophizing over Life itself. I’m afraid I might have fallen asleep, but I’m more afraid that I might have been awake and only thought I was asleep. Philosophy, I can appreciate; quirky, I can appreciate – add “romance” to the mix and skew everything with irrationality over repressing bodily fluids.

Meg Ryan has three different hairstyles in JOE VERSUS THE VOLCANO, playing three separate characters, all of whom run across Joe and make him want her and make us want her – to stop. Though it alludes to her talent, each character is only a variation on the ingratiating coquette persona we have all grown to grimace over.

Long before CAST AWAY, Tom Hanks finds himself adrift on an endless ocean with nothing but a mindless entity for companionship – Meg Ryan.