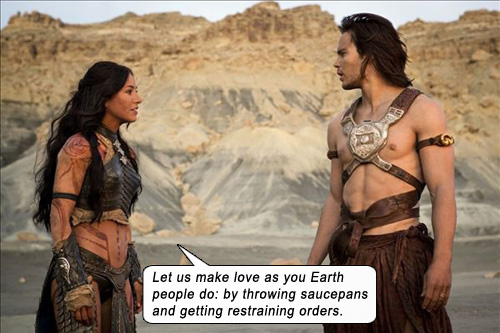 Barsoom. That’s what they should have called this movie. Barsoom – the name the Martian natives call their planet. Barsoom – the tale of a reluctant Earth soldier transported to Mars, who embraces his role as a warrior leader in a civil war between two Martian tribes. (The fact that an hourglass-shaped princess is making Martian eyes at him has nothing to do with it; we also presume faith in convergent evolution, that she would possess the requisite Earthly body parts to make all this skirmishing worthwhile.)

But the film is called JOHN CARTER (a common name which sounds like someone’s English professor – and probably is!), the name of the reluctant soldier (played by Taylor Kitsch); a beige moniker that could mean anything and evokes nothing. So I thought this movie was going to be so-so with a little ho-hum on the side – but it’s surprisingly entertaining.

Ex-Confederate soldier John Carter (created by Edgar Rice Burroughs in 1912) stumbles upon a wormhole in a cave that transports him to Mars, where he discovers the lower gravity has made him something of a “super” man, able to battle evil for the good of Martian-kind… Hmm, a society in turmoil, a savior from another world (named J.C. no less!), weak gravity so he can leap tall buildings in a single bound… Look! Up in the sky! It’s a bird! It’s a plane! It’s the precursor to SOOP-erman! No doubt Kal-El’s creators, Jerry Siegel and Joe Shuster, would have marveled over Burroughs’s wild imagination in serials like Under The Moons of Mars (1912), and novels like A Princess of Mars (1917), and who’s to say they didn’t “borrow” from Burroughs to inform their own super human in 1933? (Note that Superman’s original power was “leaping” great distances – not flying – due to Earth’s gravity being weaker than Krypton’s.) Any documented evidence that they did this? Not unless you compare the concepts themselves as documented evidence. In the end, who knows? But we can speculate the shit out of it.

On Barsoom, Carter meets tribal leader Tars Tarkas (voiced by Willem Dafoe), a 10-foot tall, six-limbed, green-skinned warrior. (Green? As in “little green men”? We find ourselves crediting Burroughs with more and more of the tales, movies, media, influences, homages and sci-fi vernacular that we’ve grown accustomed to over decades here on Jasoom). Carter allies with Tarkas’s tribe that is in conflict with another Martian tribe led by Mark Strong (as Matai Shang, an outsider to the tribes, from a race of shape-shifting beings who plan to rule Mars with their intellectual prowess and badass robe-wearing). 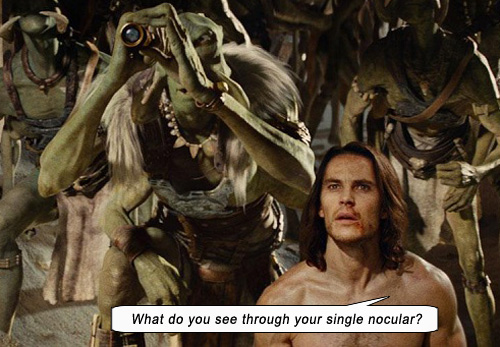 Carter also meets Martian princess-in-distress Dejah Thoris (Lynn Collins) who can wield a sword like a tigress, but still possesses that inbuilt obeisance to the Carter-meat in the loincloth, due to Burroughs writing at a time when all females were trained well in the ways of Tarzan. She brings her political yapping and hourglass figure, which thankfully outweighs the political yapping.

Carter leads a small expedition to infiltrate the opposing Martian stronghold, having Martian adventures along the way with his chick, his buds, and his dog.

Exciting CGI feature sequence pits Carter against giant, eyeless “white apes” – technology directly lifted from KING KONG 2005 – in an extended battle scene where Carter displays his mad killing skills (which only makes Hourglass wetter). What is that cute, big-headed dog-thing called Woola? It imprints on Carter as his master, and is like The Flash for some reason – he can run superfast. We can see him in long shots, running fast with his little sand backwash tornado, or walking alongside the party faithfully. 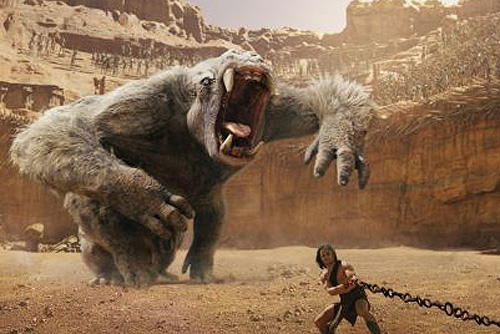 Chained to a glass cage of emotion!

Directed by Andrew Stanton (WALL-E, FINDING NEMO) and screenplayed by Stanton and Michael Chabon (SPIDER-MAN 2), JOHN CARTER is bookended by a young Edgar Rice Burroughs (Daryl Sabara) reading his uncle’s – John Carter’s – diaries. There are excellent directorial choices that do not go unnoticed: in an early montage, Stanton keeps tricking our eyes in a sequence that finds Carter trying to escape his Civil War commander (Bryan Cranston) and being captured again and again; during Carter’s great battle with the primitive Thark race (with Woola jovially alone at his side), intermittent flashbacks juxtapose his rage of burying his family with his ferocity in battle.

I’m sorry and a little embarrassed to admit I have not read any of the John Carter books, nor marveled over any John Carter of Mars comicbooks. And I can’t understand why, because they were favorites of one of my favorite authors/scientists, Carl Sagan.

Barsoom is a carefully constructed universe to explore. There is some jargon about The Ninth Ray and other such esoterica; insults, names and rites, a whole society and vernacular that will require a few sequels to flesh out. Other than that, JOHN CARTER is quite an enjoyable experience, and Taylor Kitsch (straight from his turn as B-superhero Gambit in WOLVERINE ORIGINS) carries the film well as resident lead superhero. Let your brain go numb and enjoy this summer boy’s movie, with CGI used sensibly so as not to rattle your eyeballs, and not too much romance to make you vomit. (How much can there be in a Disney production? Their idea of romance is low-cut cleavage.)

The John Carter character was last seen in original printing in 1941 (Skeleton Men of Jupiter). Surprising that no one has thought to bring Carter and Barsoom to life before, especially after the phenomenal success of Burroughs’s other super man – Tarzan. (Jon Favreau was attached to the project for awhile before it fell apart and he forged IRON MAN.) And with so many of Burroughs’s ideas co-opted by innumerable others (the usual suspects stretch “from STAR WARS to AVATAR“). With the technology to visualize what Burroughs described, this film feeds off its own descendants. It’s taken him a century to peer out from the silver screen to see us popcorning in the darkness. As Travolta said in a different age:

The Sons of Ares, Fear and Flight.
Carter looks up and sees the two moons of Mars, Phobos and Deimos (“fear” and “flight”), looking like Earth-Moon Junior; one large, one small, side by side in the sky. But the two irregular-shaped satellites of Mars are much smaller, in very different orbits, and would not appear to be moons at all from the surface of Mars.

Deimos appears to be a star, with the apparent brightness of Venus as viewed from Earth, and Phobos – with its closer orbit would still only appear a third the size of our Moon from the surface of Mars.

Hollywood likes to call this “dramatic license” – when it’s really “stupidity license.” Back when Percival Lowell thought the lines he perceived on Mars were channels that carried water to its vast civilizations, we could afford to speculate. Now, we know the facts, so how could anyone possibly make such a blunder, unless it is actively bowing to stupidity?