Keanu versus Keanu in a battle to the Keanu.

Keanu Reeves once again finds himself the linchpin of a career-defining movie series. He’s the laconic, eponymous anti-hero in JOHN WICK: CHAPTER TWO, a movie whose story is built around its innovative combat scenes. In this sequel to 2014’s JOHN WICK, Wick must fulfill an obligation to a colleague, or risk never being able to leave his underworld life behind.

We’ve heard the tale before: hitman wants out, forced into one last job, and the person who hired him tries to kill him, to leave no loose ends. That’s basically every hitman movie since 1978, right? What makes JOHN WICK different?

Movie starts on the heels of the first film, where the recently-widowed Wick exacted revenge for his killed puppy and hunted down his stolen ride. Action opens on Wick reclaiming his precious musclecar from a Russian mobster (Peter Stormare), who is a blood relative of the previous film’s Russian mobsters. Emphasis on blood. This cold open is merely a device to showcase Wick’s deadly expertise in combat, as we hear Stormare relate the mythic story of how Wick once killed three men in a bar “with a fucking pencil!,” then witness Wick as he bone-breaks and face-smashes what seem to be a whole company of Yellow Cab drivers, who roll up in their cabs one after the other and wade into him like he hasn’t paid his fare.

What exactly is going on? Doesn’t matter. Look at that style! The glam lighting, creative subtitles, the lustrous colors, the ricochet framing and, of course, that gutshock combat. Anyone who dares compare the serpentine swoon of WICK to the headache-inducing crash-cuts of BOURNE is smoking meth.

Director Chad Stahelski (once Keanu’s stunt double) allows us to drink in the fluidity of hand-to-hand expertise (which is, once again, a combination of gun-kata meets Jackie Chan meets thigh-kwon-do) with many unbroken takes in long-shot, blocked meticulously, with Keanu’s months-long training regimen on full display. Throughout the film, witness the exacting brutality of Wick’s Mozambique Drill (2 to the gut, 1 to the head), marvel at this assassin’s assassin as he careens through a cadre of killers, specifically arming himself with minimal ammo, knowing he is going to divest each assassin of their weapon to continue his bloody sweep through marbled halls and moody catacombs. It’s the most beautiful and balletic grisly murder since Frank Miller’s 300. And that’s Keanu himself taking the bruises for 90% of the bambalam. The combat scenes are heady enough for us to give the movie a pass on what are some pretty idiotic motivations.

For example: one of the mobsters asks Stormare, “Why don’t we just give the car back to him?” and Stormare sniggers that that wouldn’t be the end of it. But why not? When someone with Wick’s legend retakes his car, why don’t they grant him easy egress, instead of rolling up in their cabs and kicking him? These guys seem intent on getting killed with a pencil. As for Wick, doesn’t he know that his car’s Blue Book value will be toast by the time he has brain-bashed and car-smashed his way through the cabbies? To be fair, he’s reclaiming it for the memories he shared with his dead wife, but is the final bullet-ridden, gashed, twisted metal worth the effort? She was a smokin’ babe but now she’s gone. There are many other cars in the sea.

Cameos by John Leguizamo (as Wick’s mechanic) and Bridget Moynahan (as Wick’s dead wife in flashback) – and we start to wonder who is actually more precious to him… but all is quickly forgotten when the film’s real plot kicks in:

No sooner does Wick get home and bury all his weapons under concrete again, than a former colleague, Santino D’Antonio (Riccardo Scamarcio) calls on him with a “marker” – a medallion stamped with Wick’s blood oath. D’Antonio enabled Wick to leave the biz three years ago, and has come calling to return the favor. Wick refuses; he’s not that man anymore. D’Antonio says “Ciao. You have a beautiful home, John,” calmly goes outside, then launches a few rockets through Wick’s beautiful home, razing it in hellfire.

Saucy Ian McShane is once again Winston, the owner and manager of the Continental, the hitman’s hotel, where no business shall be conducted and no blood shall be spilled. Lance Reddick is once again Charon the unflappable concierge. Winston advises Wick to fulfill the marker.

Wick’s task: kill D’Antonio’s sister, Gianna (Claudia Gerini), about to be crowned at the High Table (the zenith of gangster Vatican) so that D’Antonio may ascend to the throne himself. Wick kills Gianna, in a tasty scene where we think the filmmakers might be giving Wick a pass as a sociopath, as he lets Gianna slit her wrists and bleed out in a tub (“because I lived my life my way – and I’ll end it my way”), but then, as he holds her hand tenderly – he puts a round in her head for good measure! Legit!

Then D’Antonio sends his hitmen after Wick (led by mute hit-chick Ares, played by striking Aussie Ruby Rose), “What kind of man would I be if I didn’t avenge my sister’s murder?”… Ha! You have GOT to be kidding! You blew up my house for saying No; now you’re trying to kill me for saying Yes! Bi-polar much, dude?!

The grandest achievement in the JOHN WICK series is the world-building. Besides the acrobatic killing scenes, writer Derek Kolstad has forged an underworld made up of as many rules as the overworld they exist within. There is a hitman’s code, a mutual respect, and an adherence to protocol. Which spur moments of hilarious undertone: like the Ralph Coyote and Sam Sheepdog scenes from Warner Bros. cartoons, deadly adversaries will stop their fight midway to have a drink or offer professional courtesy to each other.

Every facet of thug life is meticulously crafted by Kolstad: from Wick visiting a safety deposit box for his “knifing clothes” (as John Malkovich calls his couture when shit gets real – Wick leaves like Archer in a black turtleneck!), to the montage of Wick in Rome, securing arms, maps, suits, for his task, where every vendor knows him intimately and each is an artisan of their trade, treating their dealings with Wick not as supplying him with the methods of murder, but deliciously fussing as if he is planning a high society night on the town. 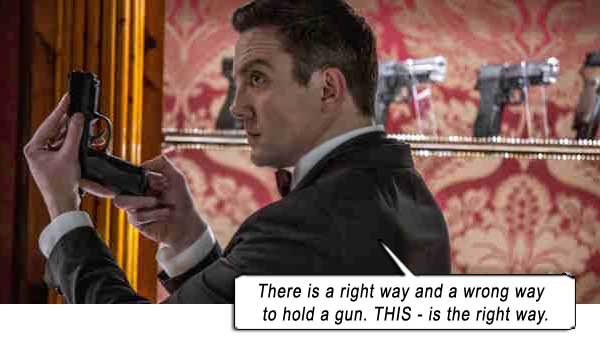 Peter Serafinowicz is known as the “sommelier,” whom Wick asks for a “tasting” – and is shown a wealth of guns and ammo to suit every occasion, “dessert” being – knives. Luca Mosca is the Italian Tailor, who asks Wick for his preference in suit design. Tailor: “What style?” Wick: “Italian.” “How many buttons?” “Two.” “Trousers?” “Tapered.” “How about the lining?”

Precipitating the tailor sewing cloth-like armor into the lining. It gives us a rationalization on why the upcoming gangsters who very sensibly shoot Wick instead of engage in hand-to-hand still cannot put him down.

And after Wick’s escape from Gianna’s home through the EDM ceremony (painfully gay music – why couldn’t it be an Iron Maiden show or something?), through the catacombs, (where we saw him tactically place incrementally larger weaponry along the route), and defeating Gianna’s personal bodyguard Cassian (Common, in an excellent portrayal – this dude is no longer a rapper; he’s a frickin’ ACTOR now!), D‘Antonio puts a bounty of $7 million on Wick’s head. And if this movie teaches us anything, it’s that hitmen hide in all professions – from buskers and janitors to sumo wrestlers, almost anyone passing you in the street; and with everyone getting alerts on their cellphones instantaneously on who to kill, it seems they’re all connected via Hitman Facebook.

What are you trying to tell me? That I can dodge bullets?
— Neo, THE MATRIX

But too many casual hitmen are hitting on him, so Wick turns to – Morpheus!

They knew. I mean, the filmmakers musta known all the MATRIX gags that would ensue with Laurence Fishburne coming face to face with Keanu Reeves again. But they cast him anyway, as the Bowery King, a thug whom Wick did a favor for years ago, now a kingpin, who owes Wick a favor in return! (As a formal marker was called on Wick, now Wick calls on an informal marker.)

Bowery (overacting like the world is on fire and only his cheese will put it out – “Will somebody PLEASE get this man a GUN?!”) gives Wick a gun with only 7 bullets – one for each million he’s losing by not claiming the bounty himself.

As the reflection motif is a favorite gambit with director Stahelski, he stages the finale in a hall of mirrors. Now it’s nothing BUT reflection. Of course, the art of this framing is never seeing the ubiquitous camera or crew in any reflections!

Eventually, Wick will shoot the smug D’Antonio right there in the Continental, with Winston witnessing. No matter that D’Antonio was smirking down Wick’s barrel that he wasn’t allowed to shoot him on the hallowed ground of the hotel – the rules were broken! Winston has no choice but to declare Wick “excommunicado.”

And Wick runs. No more protected by the hitman code, the High Table after his blood, and every hitman on Earth open to claim his bounty, John Wick runs, his faithful unnamed doggy by his side, blood seeping from numerous wounds, black-suited, flopsy-haired, slightly limping, in the rain, as cellphones chime alarmingly on all sides, every passerby suddenly taking on menace. He runs as the outro credits roll…

…because he’s the hero Gotham deserves, but not the one it needs right now. If he wants peace, he must prepare for war. Because he’s not our hero. He’s a silent guardian. A watchful protector. He is – The ONE!–

Dammit!– Laurence, you’re confusing me with all that overacting!–