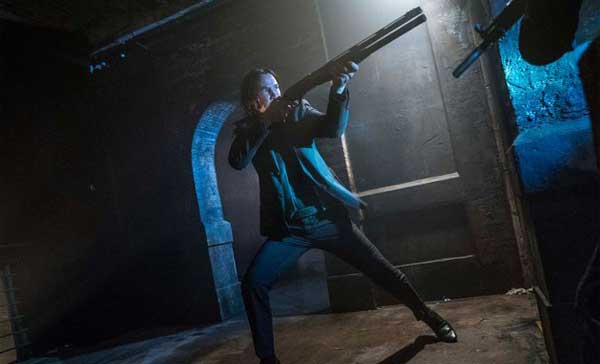 Faster than a speeding Bourne, more powerful than a Transporter, able to leap Chuck Norris in a single bound. Look! Up in the sky – it’s a Bond, it’s McClane, no, it’s – JOHN WICK: CHAPTER 3 – PARABELLUM! The unkillable killer returns in the undisputed Heavyweight Champeen Boys’ Movie of the Summer!

If JOHN WICK 2 was “an art film first, a combat film, second,” then PARABELLUM is an out-of-the-closet combat film first, a social justice pander, second, and an art film way, way third. The world-building is expanded, the focus is narrowed, and the vaginas are coddled. The hitman “business” is fully explored, but in doing so, John Wick himself is unintentionally downgraded to a small mote in a universe he once dominated.

Following directly on the heels of its predecessor, PARABELLUM finds Wick running in the rain to escape the consequences of his excommunicado status, for spilling blood on the consecrated grounds of the Continental Hotel. And as every assassin on Earth attacks him for the $14 million bounty on his head, Wick claws his way to a meeting with the instigators of these underworld rules and penalties – the High Table – to ask forgiveness, and a way back into the unholy hitman fold.

Keanu Reeves returns as John Wick, legendary hitman. But the dynamics are all skewed. In the original JOHN WICK (2014), Wick was a feared Legend on the hunt, in JOHN WICK: CHAPTER 2 (2017), the first half saw Wick as a Legend on the hunt, but the second half was the Legend being hunted; now in CHAPTER 3, Wick is unequivocally the Legend being hunted. Every hitman who once spoke of him in reverent awe (“He once killed three men in a bar with a fucking pencil!”), is trying their hand at besting this godkiller, who now seems merely a mortal fighting for his life.

Of course, the makers of PARABELLUM (writers Derek Kolstad and Shay Hatten, and director Chad Stahelski) understand the concept of removing everything from the hero so that his rise will be all the more powerful, but in flensing Wick of his halo, they have also de-boned the mythos, the fear, the baba yaga… 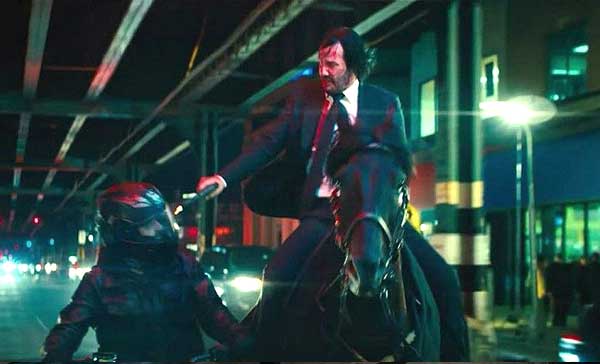 Ian McShane reprises his role as saucy Hotel Continental manager, Winston, who begrudgingly excommunicates Wick, because he considers Wick a friend. Lance Reddick is again stolid concierge Charon, who once again takes in Wick’s dog while Wick sorts out business. Laurence Fishburne returns as Bowery King, bringing his ghetto cred and overacting. Angelica Huston is The Director, a high-ranking leader from so far back in Wick’s past she calls him by his birth name; Wick brings her totems that ensure she will help him find passage to the High Table.

Halle Berry is fellow hitman, Sofia. Obviously old friends with Wick, she shoots him in greeting. Yes, Berry’s first shot in the film is her first shot at Keanu – hitting him in the shoulder of his armored jacket. Did she know it was armored? If so, why shoot? If she didn’t know it was armored, was she trying to kill him, and if so, why did she shoot only once? It makes zero sense. Until you realize it’s just another emasculation device: to establish Sofia as “equal” to Wick, they had to make her “dominant” first. That’s just how it is in this gutless double-standard society.

Wick presents Sofia with his “marker” – a medallion that marks a past favor (he delivered her daughter to safety from the underworld). He seeks a favor in return – guide him closer to the High Table. This scene makes Wick look unprincipled, because he is relying on the same protocols he disparaged in the previous movie. When D’Antonio wanted a return favor from Wick, Wick blew off D’Antonio’s marker, citing he was “out of the business.” But now Wick uses this exact same device to call in a favor – in a business he wants no part of. Halle accepts, because Keanu is sexy with that three-day growth an’ all.

The inclusion of Berry dilutes the movie’s dynamic even more. Up to this point, Wick is undisputed master at his craft of flopsy-haired Keanu-kwon-do. But for the sake of SJWs everywhere, Sofia is presented as a female Wick (because sisters are doing it for themselves, right?), and when Wick and Sofia storm a High Table stronghold with that same combat style, every time the camera focuses on Berry, we wonder why we’re here. Because the focus has always been on Wick’s wondrously inventive moves – and he’s way over there out of focus. It’s not called WICK AND SOFIA – why do I care how proficient Sofia is? Pandering to social justice snivelers, Sofia also owns two cute Alsatians that she brings into battle, that always go for the balls. Oh yes please! Now that we’re here, we might as well go all the way with the emasculation metaphors… When Sofia eventually disappears from the plot, I breathed a sigh of relief and took my hands off my groin. 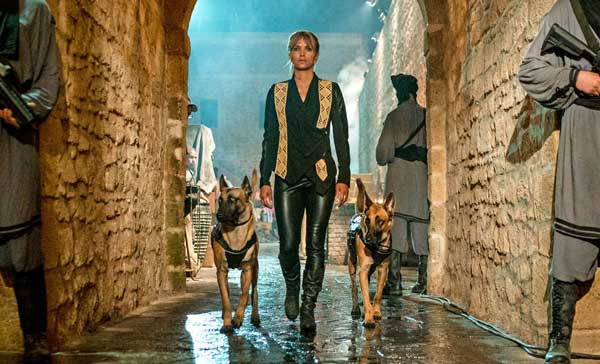 Speaking of ladies—er, or maybe men, Asia Kate Dillon (who in real life identifies as “non-binary”) authoritatively transmigrates into the Hotel Continental one day, introducing herself—uh, himself—uh, itself, as The Adjudicator. Representing the High Table, she/he/it declares Winston’s Continental “deconsecrated,” further doling out punishment to Bowery King, The Director and anyone else who offered succor for Wick during his excommunication. It thickens the plot, while addressing, subverting and causing sexism all at the same time.

Saïd Taghmaoui is chilling as the Elder that bestows on Wick a terrible penance. Again, Wick seems intent on getting back “in,” to the point where his sacrifices outweigh his reasons for being “out.” He says he wants to stay alive for the memory of his wife, which is almost as weak sauce as George Lucas’s, “She lost the will to live.”

Of course, you don’t watch a JOHN WICK movie to assess its plot points or rate its sexism – you watch it to marvel at the combat, and PARABELLUM’s plot jets us from one combat scene to the next. Though each combat scene is as interesting and unique as possible (gun-fu, motorbike-fu, horse-fu, mirror-fu, LGBTQ-fu, etc.), the very fact there are so many scenes of combat does become tiresome. The hand-to-hand training and expertise is on full display, with each scene framed in an artsy swirl, yet sometimes our inner voice wants to yell at Wick’s assailants: “You guys ever heard of sniping?”

Only in the last gun-battle does Winston restore a semblance of Wick’s mystique, “And Mr. Wick – do what you do best: hunt.” Keanu uses his exact same lines from THE MATRIX, to proclaim he needs: “Guns. Lots of guns.” And it’s a welcome return to the dynamic displayed in the very first battle in the very first WICK movie, when those masked intruders stalked Wick’s home, and he took them out with the Mozambique Drill and sit-on-my-face-fu.

Even so – this battle is a paradox: Winston asks Wick whether he wants to remain Baba Yaga – the Boogeyman – for eternity, or whether he wants to live in peace outside the business. Wick chooses peace over baba yaga – then goes baba yaga on his assassins. Now, I don’t mind that Wick wants to leave the business – that’s been the Prescribed Hitman Movie Plot for decades now – but you can’t quash “legend”; you can’t just send out a memo saying, “Don’t call me Baba Yaga any more, pretty please.” What does Wick hope to achieve by killing every High Table assassin except becoming a bigger Baba? 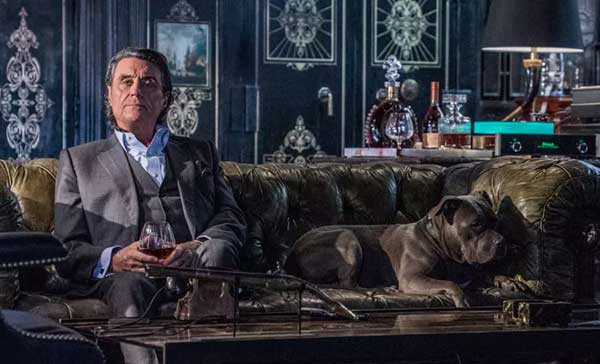 PARABELLUM is brought to a shark jump conclusion when The Adjudicator pronounces Winston “re-consecrated” on the strength of irony (i.e. since he armed Wick to annihilate all the High Table soldiers it must prove how devoted he is to keeping his hotel a sacred landmark. Uh, wha–?). Irony, or editing for runtime? And Winston’s solution to ensure John Wick returns for a snatch at the High Table is utterly haphazard, unconsidered and foolhardy, yet played to look canny. Put it this way: the only way Wick survives a fall like that is if he is the Coyote from Roadrunner cartoons.

I guess the upcoming JOHN WICK: CHAPTER FOUR proves conclusively that John Wick is the Coyote from Roadrunner cartoons.

Asia Kate Dillon – in real life identifying as NON-BINARY. A Millennial made-up term to confuse old people. It means you are attracted to/repulsed by men AND women. Cheers to Asia for being free about her pansexuality, but there’s no reason to go inventing new words for people who are basically confused, and wish to confuse the rest of society.

Asia’s gender is female (because – vagina), and the fact she has a “non-gender-specific” sex partner who looks like a lesbian only means one thing – she’s a lesbian (no doubt, with a modicum of penis-envy). The word “non-binary” is so meaningless it’s laughable that the pandering public have been conned into taking it so seriously. (EXPERIMENT: Okay, so you’re non-binary. Use the men’s toilets next time. EXPERIMENT: Go topless in public and not get arrested. EXPERIMENT: Contribute some sperm to a baby. EXPERIMENT: If you get arrested, insist you are housed with the male population.)

“Binary” denotes the TWO-SOME nature of chromosomes (XX for women, XY for men), and we understand that is a simplification, because physical traits don’t necessarily mesh with mental disposition (i.e. you can be male and “identify” as female). However, they should reserve the term “non-binary” for hermaphrodites (both genders physically represented in one body), but there’s already a word for that – hermaphrodite.

In the interest of fairness, here is Asia’s take. You decide what words you want to add to your lexicon…

I’m not saying “be male” or “be female” – I’m saying, you can identify with whatever you want – it doesn’t hurt the rest of us – but don’t impose pronouns, protocols and modes of behavior on the rest of us to pander to your ethos. As long as everybody subscribes to the ethos of treating everybody else with respect, we’re all in the clear. Your identity, your preference, your proclivity has already been described in a multitude of words – don’t fawn over new ones that mean nothing, dude—I mean, babe.