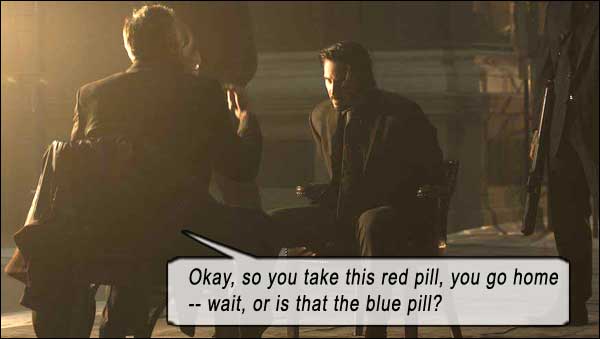 Keanu Reeves hasn’t had to act this little since he was Klaatu.

Keanu is retired legendary hitman JOHN WICK, who informally comes out of retirement for revenge on the men who killed his puppy – the last gift from his dead wife. (I’m not an animal person, but I gotta admit – that is one cutie pie puppy!)

When the son of a Russian mobster, Josef (Alfie Allen), beats up the retired Wick and steals his car, the infuriated Russian mobster (Michael Nyqvist as Viggo Tarasov), tells Josef he should have killed Wick, rather than just beat him up, describing Wick as “Baba Yaga” – not exactly the Boogeyman, but “the one you sent to kill the Boogeyman… I once saw him kill three men in a bar – with a pencil.”

I hate to stop the world for a Reality Check in the first act, but upon being witness to Wick’s killing skills over the course of the film, we have to ask: How exactly did three young thugs beat him up in the first place? Sure, we could argue Wick is “retired,” and didn’t want to resort to the skills that he equates with his unsavory past, but when life-or-death situations arise, shouldn’t self-preservation kick in, muscle memory, innate skill? Just putting up a single arm to ward off a boot to the nuts? Wick does none of this, yet when he resigns himself to revenge, he can suddenly kick ass like a baba yaga without any refresher course as soon as he hits the streets. Sigh. Onward. 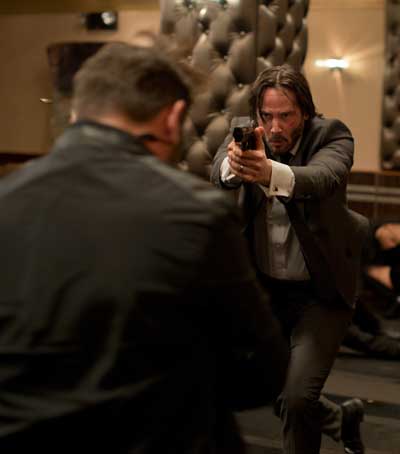 Striking down in furious anger all those who would poison my brothers and sisters.

The most dazzling aspect of JOHN WICK is its creative fighting style. Just when we thought we’ve seen it all, Wick demonstrates yet another stylish method of speed-and-agility ballet-fighting that melds Segal’s aikido and Chan’s Drunken Master and Scarlet Johansson’s thigh-kwon-do and even Christian Bale’s gun-kata (from EQUILIBRIUM). The Spock Chops are lethal, the gunfire decisive, close-range, head-shots, blood gouts, fatal. This is fighting designed to end your opponent quickly, not draw it out for torture or honor. In Wick’s first encounter – when Viggo sends a cadre of assassins to his home – we realize we are watching a cult movie take flight.

These are literally “faceless” killers, all wearing black hoods – which is probably why they have no peripheral vision to see Wick with his drunken-gun-kata-thigh-kwon-segal-do. We get the impression it is ruthless efficiency, never wasting energy or any extra moves. And the filming of these sequences is sparsely edited, with long takes to be able to drink in the unique action, rather than the Paul Greengrass or Olivier Megaton methods of crash-cut until your eyes fall out.

And we further realize the filmmakers (writer Derek Kolstad and first-time director Chad Stahelski) are forging a brave new underworld; a parallel society existing in symbiotic collusion with the world of laws. When a cop comes to Wick’s door to alert him of noise complaints, he sees one of the dead assassins in Wick’s hallway and calmly asks, “You, uh, working again, John?” “Just sorting some stuff out, Jimmy.” Tells us so much: that even if Wick did start working again, the cops would leave him alone; that a murdered body in Wick’s hallway means nothing in this upside-down society where laws are made by the lawless.

Amidst a multitude of dead bodies, Wick dials a number, “I’d like to make a dinner reservation for 12.” And a wizened old cleaner appears (looking like Ed Harris) with a hefty cleanup crew, who bag and wrap the bodies, hauls them into a garbage van, and spit-shines the residence. Wick drops 12 gold pieces into the cleaner’s palm – one for each corpse.

The great John Leguizamo is Aurelio the chop shop owner. Dean Winters (the Allstate Insurance “Mayhem” guy) is Viggo’s right hand. Adrianne Palicki (AGENTS OF S.H.I.E.L.D and a great rack) is a fellow hitwoman out for Wick’s bounty. Ian McShane (we knew he would turn up somewhere in this hard guy paradise) is Winston, as fey as a sniper’s rifle is long, the manager of the Hotel Continental, where thugs go to unwind, and where the unspoken law is “No business conducted on the premises.”

And Willem Dafoe, a fellow hitman commissioned to be an angel of death, becomes a guardian angel with a sniper rifle. 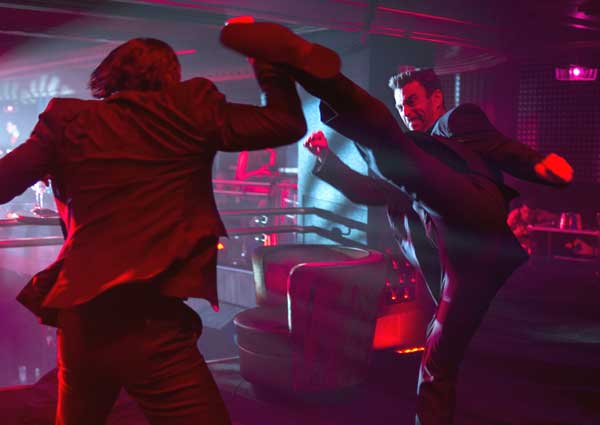 Stretch that leg, dahling. Feel the burn in your groin. Now you’re Dancing With The Stars.

It’s a running gag that everyone keeps asking Wick if he’s back. He keeps denying it. He really is just after that one douchebag. But Viggo’s thugs keep getting in his way. Winston coos at him, “You dip so much as a pinky into this pond, you may well find that something reaches out and drags you into its depths. You got out once. You should stay out.” So we imagine that when Wick eventually admits he IS back, it would be a Second Coming scene of godlike proportions, maybe staged in the manner of taking out a multitude of henchies, and while wading into them, musing, “People have been asking me if I’m back…” Maybe he would drop the last thug, stand over him, low angle, backlit, hero framing, and scowl: “I’m back.”

Unfortunately, Wick’s comeback pronouncement is staged so poorly, Ian McShane almost went straight. From a chair where he is tied up, Wick struggles and foams, “People have been asking me if I’m back – Well, I’m back.” Uh, buddy, talk to the rope.

Normalizing the gangster community (our minds keep going back to that Warner Bros. cartoon of Ralph Wolf and Sam Sheepdog, punching the clock, before they go about their day trying to kill each other) and creating an ornate criminal world of upper class finery and debauchery, JOHN WICK falls down when it comes to talking-instead-of-shooting. Faceless henchies eventually capture Wick and bring him before Viggo. I guess they couldn’t have shot him after they knocked him unconscious with that car…

Viggo proceeds to complain to Wick that Wick is killing all his men and trying to kill his son. I guess they couldn’t have shot him while he was tied in that chair. “People have been asking me—“ BAM! Roll credits.

Further, Viggo goes Snidely Whiplash for some reason, giggling and taunting Wick, where but moments before he was ominously a harbinger of Wick’s Baba Yaga apocalypse. The sudden change in the character is jarring. No matter that this movie is lauded for its “gun-fu,” its controlled film-making, its underworld society and Keanu’s stoic black-garbed persona, when it comes to talking-instead-of-shooting, it’s the same old Klaatu barada nikto.