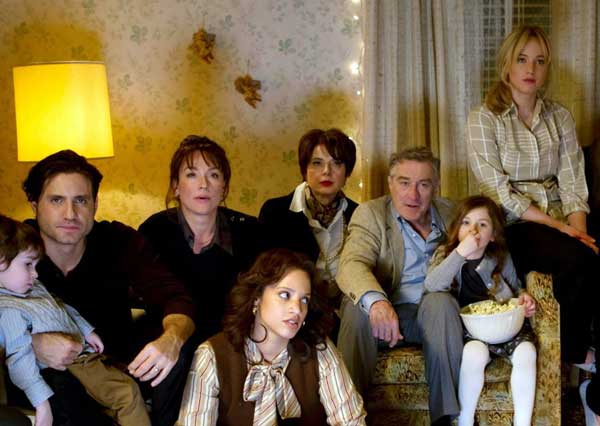 The cast of JOY don’t know what’s going on either.

A mess that needs to be Miracle Mopped!

After the confusing marketing campaign, we were left wondering what JOY was actually about? Hmm, from the trailers, seems like she has a dead-end job, her father hates her husband, she’s walking determinedly in the snow, she’s firing a shotgun, she’s cutting her hair, a funeral, a wedding, a business, cops, kissing, drawing, “pick up the gun,” “you’re shaking us down”… Is this chick a mobster or just bi-polar? Well, De Niro is here – probably a mobster…

JOY is about the inventor of the Miracle Mop, Joy Mangano, and how she marketed it. That’s all.

After two Oscar winners in a row (THE FIGHTER and SILVER LININGS PLAYBOOK), and then a BAFTA/Golden Globe winner in AMERICAN HUSTLE, director David O. Russell seems like he’s piecing together an experimental film with his Overconfidence pulling the strings. The first half of JOY is a motley gaggle of scenes that don’t quite jigsaw together, in an attempt to create chaos in a young inventor’s life; to give Joy the adversity that all the Screenplay Books say she needs to overcome, to look heroic. The second half tries to pull all the threads together, but Overconfidence is drunk on power and has already peed on the couch and is now trying to screw the pooch.

Instead of being a tribute to a strong-minded, creative woman, JOY is a confused and cluttered housewife diary. It is physical pain trying to watch JOY, as it stumbles around in the dark grasping at Inspirational Movie.

Jennifer Lawrence is Joy, a working single mother who has somehow accrued all her extended family members under one small roof: her divorced parents, dad (Robert De Niro) and mum (Virginia Madsen), grandma (Diane Ladd), ex-husband (Edgar Ramirez), and her two small kids. Noise, soap operas, interruptions, arguments, leaks, bills, backstory – okay, my teeth are grinding and my hair is all pulled out. What now?

Joy has the idea to make a mop that can be wrung out without touching it; she approaches her dad’s rich girlfriend (Isabella Rossellini) for funding, who gives Joy some mystical bullshit instead of a contract. Joy’s sister (Elisabeth Rohm, who also played opposite Lawrence in HUSTLE) hates Joy’s initiative and wants funding for her own projects. A totally fictional character, Joy’s sister is only here because the Screenplay Books say the hero needs an adversary within her camp.

Problems with the makers of the molds, which Joy straightens out like a mob boss. But first, Stupid Plot Point Award goes to the scene of Joy visiting the factory where the mold makers have stolen her designs. After arguing with the factory boss trying to rip her off, she asks to go to the bathroom. A thug escorts her to a bathroom which has a SECRET DOOR that leads to an AIR SHAFT big enough to walk through, which leads her to the FACTORY FLOOR where her STOLEN MOLD DESIGNS are openly ON THE TABLE for her to find. Someone actually WROTE THIS SHIT DOWN and many, many people conspired to bring it to the silver screen as written. Someone needs to appeal to the Supreme Court to punish this Screenwriting Felony…

There is surprisingly no romantic interaction between Blue-Eyes Brad and Luscious Lawrence, even though both these people are obviously sweet-asses. Some viewers applaud this decision of writers Annie Mumolo and Russell, but the decision to keep the stars platonic is not for “realism” or “respect” to Joy. The decision is based on sexism, i.e. if a woman is romantically involved with a man, she won’t be taken seriously as a businesswoman, let alone an independent inventor. The plot would then revolve around everything she does being about attaining or keeping her man. Even if the plot wasn’t going there, in audiences’ minds, that’s where it is. It would diminish the woman’s power. Part of this sexism is definitely the audiences’ fault: we cannot hold more than one throughline in our heads; it’s too much to see a person being in love AND having to run a corporation with lawsuits and workers and faulty parts being billed incorrectly. If Joy was to hook up with anyone, it would have to be a fling situation, or – as portrayed in the movie – the real life conundrum of having her ex-husband in the house, but never being entangled with him.

Director Russell has stated JOY is not a biopic, which gives him the license to do so much Hollywood Finagling.

Y’know, I’m always whining that in biographies, the integral steps toward a person’s fame and fortune are neglected; so many Scenes Missing. Well, here, there are too many scenes, less than half of them integral. And most of those scenes are in the trailer. It’s ironic that a product that sold so well through its effective marketing couldn’t get an effective marketing campaign!

Mop up this mess, David O!

Joy Mangano is actually an entrepreneur that is so much more than a one-hit wonder. We would never learn this from the movie, but she holds more than 100 patents. There is a short coda that shows Joy as a success sitting in a big office, receiving young inventors like a matronly veteran, but we realize too late the movie is ONLY about the fracas that went into the Miracle Mop, not about anything that came after it, or about how Joy became “bigger than QVC.” If this small period in Joy’s life was the movie’s goal, then fine. But in trying to achieve that goal, Russell’s Overconfidence wandered all over God’s creation and then fell down the stairs in a coma.