Hayden Christensen has learned a lot from being a Jedi. 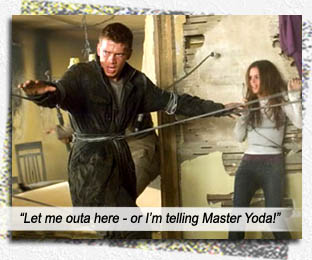 Well, that’s not exactly true. He’s progressed from not being able to act his way out of a paper bag, to making a small rip in it.

Hayden is David Rice, a “jumper” (a sexy, Y-Gen euphemism for “teleporter”), who lives the good life in a swank London apartment, teleporting hither and thither at his whim: lunch in Paris, dinner in Tokyo, and breakfast on the head of the Sphinx (totally pissing off Zahi Awass).

The teleportation sequences are excellent. A smidgen of physics theory is applied to the “jumps,” resulting in the “jump-scar” – a crackling, translucent, para-dimensional residue, like a fading window whenever a Jumper teleports – taking a moment to “close” between locales. Jumpers can bring objects through this rift, and this plot device is used to great effect when David follows fellow Jumper, Griffin (Jamie Bell, KING KONG 2005), to plot points and beyond.

JUMPER is a one-trick pony that wishes it knew just one more trick.

Written by David S. Goyer, Jim Uhls and Simon Kinberg (from the Steven Gould novel), and directed by Doug Liman (MR AND MRS SMITH, 2005), JUMPER quickly falls into chase movie format when it introduces suicide-blonde Samuel L. Jackson as one of the Paladins, a league of buzzkills trying to eradicate Jumpers.

The Paladins follow David and his high maintenance high school sweetheart, Millie (Rachel Bilson) to the Coliseum in Rome, where they are dispatched by David and Griffin, but David ends up getting arrested, for breaking into the arena. While he is being cuffed, the authorities simply ignore his small-ta-ta sweetie-pie as if she isn’t there – either that, or she’s bribed them by doling out bj’s by the mouthful.

There seems to be no end to Millie’s ungratefulness. Firstly, David, whom she hasn’t seen in years, turns up and takes her on an all-expenses-paid trip to Rome – and it takes her all the way to one hour into the hotel room to jump his bone, when any self-respecting trophy byoch would have dropped her panties five minutes into Mile High Club. Ingrate! Then when he’s about to take her home – after sacrificing himself so she wouldn’t have to spend any time in prison, she whines at him, “I told you, you didn’t have to tell me everything – I’ve changed my mind.” Well, I’ve changed my mind about your free trip home – how’s that grab your little tennis ball ta-tas, tart?

Paladin Jackson hunts David and Griffin until bigger and bigger things have to get Jumped to hold our interest. Until the big reveal – David’s mother (Diane Lane cameo) is a Paladin! (Big Chords.) That’s why she left the family unit when he was a baby bad actor.

David visits his mother in a final scene that is intended for some kind of closure – but it only serves to make us hate Diane Lane. You see, she’s a Paladin by choice: it takes an effort to go out of your way to find Jumpers and kill them; whereas Jumpers, like Mexican Beans, are born with that talent. It’s like being born with different color skin… you can see where this is leading. Paladins do not hunt Jumpers for robbing banks and taking advantage of our women – they hate Jumpers for their ability to jump, period. In other words, Paladins have the mind-set of racists! They irrationally fear and want to kill Jumpers solely for a physical trait that cannot be helped. Lane becoming a mother to a Jumper didn’t open her mind to her irrationality (much like Dick Cheney’s gay daughter doesn’t move his closed mind one iota towards acceptance). She left the family when he was five, in her words, “to save his life” – which means she had the opportunity to learn about the mind of a Jumper and instill values and ethics in that which she feared/hated, but instead of nurturing David, her twisted mind decides the “best option” is – no, not to simply LEAVE HIM ALIVE and raise him – to leave the family! I bet she votes Republican too.

Having narration in a movie is dicey at the best of times – unless you’re Morgan Freeman. Then it’s a thing of beauty, nuance and aural intoxication. Hayden Christensen is a long way from Morgan Freeman – and his narration is even further; that monotonal drone is like listening to mud dry.

Movie ends with hundreds of questions unanswered: is David’s girlfriend any more bearable now that she knows the truth?; where’s Griffin?; is David’s mum still on Griffin’s hit list?; is Sam Jackson’s blonde ‘do a result of all that electroshock therapy he took as Mace Windu?; will Hayden ever escape that paper bag?

Much to learn, you still have.