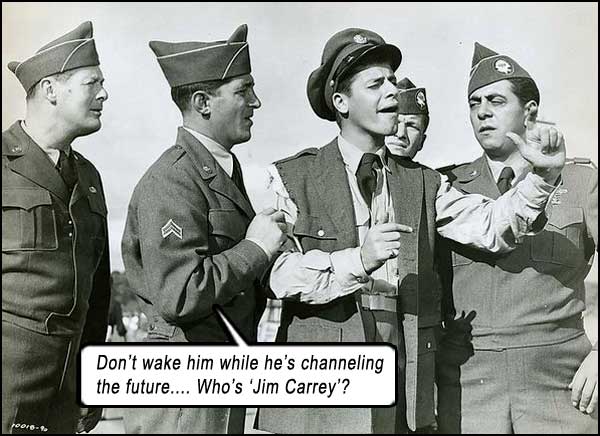 JUMPING JACKS marks the third time Martin and Lewis have been in the military. Army, Navy, now Paratroopers.

Through an identity mixup, civilian Hap Smith (Jerry Lewis) finds himself in the paratroopers with his old nightclub partner, private Chick Allen (Dean Martin); though Chick tries to protect Hap from the authorities and discovery, he finds that Hap inadvertently keeps getting promoted and rewarded for his ineptness. (Wait. Dean’s name is Chick? When we were very young, we figured that Dean was always named Steve or Bill, while Jerry was always Homer or Myron – but seriously, CHICK? It is to laff.)

With six writers, the premise of JUMPING JACKS is pure idiocy: Chick, entertainment director for the paratroopers, wants his dependable nightclub partner Hap, a civilian, to join a military revue he is organizing. He knows Hap will make the revue a hit, thereby earning him (Chick) a promotion. So he cooks up a plot to have one of his military cohorts, Dogface Dolan (Richard Erdman), switch papers and tags with Hap, so that Hap can travel with Chick’s paratrooper group and get onstage with impunity. Well, they perform the revue (where Martin tosses off one of his velvety croons, The Parachute Jump) and Hap does his shtick. They are such a hit with the general that he orders Chick and Dolan (i.e. Hap) on the road with the revue, meaning the actual Dogface Dolan cannot reclaim his place in the paratroopers, so wanders the wainscoting trying not to be discovered by the troupe’s irascible Sergeant McClusky (the real life dogface of Robert Strauss). 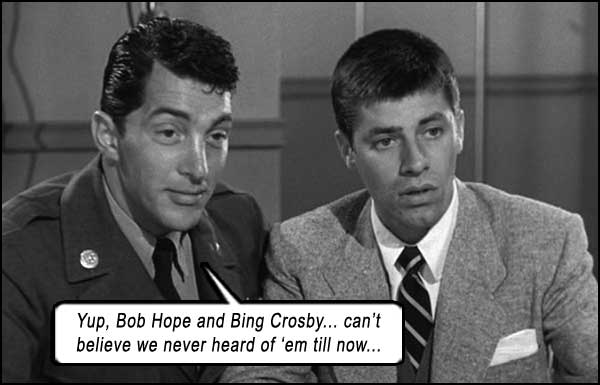 The farce allows Lewis and Martin to blast out their inimitable comedy routines, and director Norman Taurog (directing his second of six Martin and Lewis pictures) would be canny enough to just leave them to Martin-and-Lewis to their heart’s content. From its nightclub days, their act was so unique and irrepressible that it had to be seen to be believed.

In an opening scene, Jerry also gets to solo a cavalcade of different characters. By this point (their 6th film together), Jerry’s shtick has become second nature to him; we can see the study and effort that has gone into making it all seem so effortless. The classic reactions, the impersonations of stereotypes, the scared faces, stupid faces, idiot voices, surprised jerks, etc. Either you like it or you hate it. There’s no in-betweening with Jerry Lewis. Dean Martin, ever the underappreciated straight man, was more of a broad taste.

Scenes of the boys in parachute training (with the ever-present rear-screen projections simulating sky or training fields); running gag of McClusky almost discovering the real Dogface Dolan; scenes of Hap trying to sneak out of the paratrooper camp to satisfy the subplot of returning to his female partner on Broadway (Mona Freeman), for whom he holds a torch; and Dean gets to croon no less than four songs, one of them a duet with Jerry.

In training maneuvers, pitting one regiment against its brethren, we see stock footage war, planes and tanks firing. Hap unwittingly takes cover under a bridge with a satchel of grenades and inadvertently wins the pretend war for his side. Then comes The Real Thing (complete with stock footage of air-dropping jeeps, and skies aflutter with paratroopers), where Hap and Chick parachute into enemy territory. Before any shooting or killing, they’re proclaiming their devotion to each other, until the stinger gag, and the movie ends on a Jerry scream, “Chiiick!”