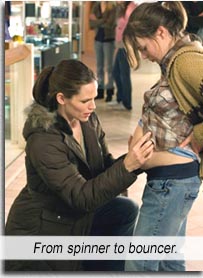 I know that JUNO was a big hit with the pedophiles and sweaty-mouthed goons trying to catch a glimpse of sugartit, but I just have to get this off my flat green chest: Sorry Jason Reitman (director) and Diablo Cody (writer), but this movie doesn’t exist in a vacuum. Are you trying to purvey the underage pregnant chick in your movie as a role model, an independent woman, a strong character or a slut? And when young girls eschew the Pill to follow in the footsteps of their role model Ellen Page (starring as pregnant, underage Juno), who are they gonna blame?

Just one question: How many GUYS are buying this crap? Oh, we know that 16-year-old girls across America are swooning in wide-thighed empowerment. But how many men over 20 hear Juno’s lament, “I need to know that it’s possible that two people can stay happy together forever,” and clasp their breasts in romantic abandon?

Ellen Page plays Juno with the verve and vivacity that the part requires, and her performance sells the movie; problem is, she’s playing it like a woman twice the age of her character. She knows too much. It’s not that she’s “mature for her age” – her cultural references are from another generation, all delivered with an irritating cynicism and insouciance that makes her sound like Jim Henson’s Tarantino Babies. How many instances of Iggy & The Stooges, Soupy Sales and Dario Argento can she possibly pull out of thin air and remain credible?

Jason Reitman (THANK YOU FOR SMOKING) directs, with his balls in a vice; John Malkovich (yeah, the crazy one) co-produces.

J.K. Simmons and Allison Janney are Juno’s credible, likeable parents, and Michael Cera is the guilty willowy boyfriend, Bleeker (if anyone can imagine his sperm possessing the swimming power to actually impregnate someone), with all the screen presence of an apology.

Jason Bateman and Jennifer Garner are Mark and Vanessa Loring, the cutesy couple who wish to adopt Juno’s baby, whom we discover have problems living up to their glossy-magazine aspirations. Bateman, though reined in, gets a few good Bateman-isms in there, and Garner, as always, looks and acts like her high cheekbones haven’t healed yet.

I’ve got nothing against teen pregnancy. I’m against the hypocrisy of pretending like it’s something wrong. If an organism CAN procreate, there is nothing morally, ethically or psychologically wrong with reproducing. JUNO’s makers think they’re doing something new, forgetting that the earliest hominids (and many tribal societies today) mated and reproduced when they were slightly younger than Juno MacGuff – without all the egregious societal hypocrisy.

After pretending to be “outrageously offbeat” JUNO safely falls back on that demonstrably stupid message that someone “meant for you” might have been under your nose all along. This sixteen-year-old with warring hormones and no idea on how to be a woman tells Bleeker, “I love you” – and we’re meant to buy that as sincere. When just yesterday…

… under some cloud of hormonal maladjustment she had tearfully jumped in her car, smooshed on lipstick deliberately, and drove out to actively seduce Mark Loring, then couldn’t understand why she was doing it. And when Mark told her he was leaving his wife, did any inference seep into her small mind that he was inviting her to be a casual squeeze without strings or guilt? All proving that Juno doesn’t know the first thing about relationships, love or sex. So we’re supposed to believe her supposed epiphany when she declares her puppy love for Apology?

Message To Girlies: That wasn’t an epiphany – that’s weighing her options and deciding on an Apology. After his smitten blue-balled confession that he thinks she’s “beautiful all the time,” she figures this dorknozzle has his uses as a provider. Wait until they’re both 24, after she’s squeezed out a couple more kids (who aren’t his), and he’s between gas-pumping jobs and they can’t make payments on the trailer….

Movie is made well enough, in that prosaic manner of all American teen comedies, but it is not “original” or “delightful.” Juno spells it out just in case anyone missed the sledgehammer message of why this movie was “different”: “You’re meant to procreate AFTER you fall in love, but with us we procreated first.”