When Special Effects Ruled The Earth

After Charles Darwin, Richard Owen, Louis Leakey, E.O. Wilson, Stephen Jay Gould, Richard Dawkins, Robert Bakker, Jack Horner and thousands of other anthropologists and paleontologists whose names we shall sadly never know, broke their backs formulating the knowledge that allowed us to comprehend evolution and the Dinosauria… JURASSIC PARK III takes those decades of learning – and gives us Running and Screaming.

Totally lost the plot; the corporations and marketers and unevolved apes who call themselves filmmakers have forgotten what made dinosaurs such a wonder in the first place. It wasn’t Running and Screaming. No kid ever picked up a dinosaur toy or looked in a dinosaur book, and no paleontologist ever unearthed a dinosaur fossil and contemplated what fun it would be Running and Screaming From Dinosaurs.

The majesty, the mystery, the alienness of dinosaurs to current fauna; the thought-provoking concept that all the dinos we know of are actually more successful as a species than Man, having thrived for millions of years (while homo sapiens has been in recognizable form only 100,000 – some say even less after viewing Rob Schneider movies); the fact that at their reign, certain dinosaur species were the largest animals on Earth; the foods they ate, their herd habits, their warmbloodedness; the fact they were NOT REPTILES but a sub-Group of Archosaurs; the fact they are more closely related to birds than reptiles or mammals – all these things make dinosaurs intriguing and wondrous.

But JURASSIC PARK III has Running and Screaming. A lot.

Sam Neill is once again Dr. Alan Grant (remember him? From JURASSIC PARK, 1993, sensibly sidestepping THE LOST WORLD, then insensibly stepping in it with this one) who is tricked onto that OTHER island with the dinosaurs – Isla Sorna? Isla Nublar? – who cares? When does the Running and Screaming Express leave?

Only two subplots are worth mentioning in this film – that of the Velociraptors‘ communicative abilities (through noises made via an air chamber in their skulls); and the heartbreaking fallout between Grant and his student sidekick, Billy (young, muscular, blonde Allesandro Nivola, one-upping Jeff Goldblum as The Sexyboy).

All the rest is Running and Screaming.

William H. Macy is the same old worry-wart poindexter, surprisingly matched with a smokin’ ex-wife, Tea Leoni – both looking for their son (Trevor Morgan) on the island. Don’t even ask how the plot got him there – suffice to say, it was ridiculous wrapped in stupid and blow-dried by idiotic. Michael Jeter is the faux mercenary, quickly becoming the William H. Macy of B-Actors. Laura Dern makes an interesting cameo as Ellie Satler, Grant’s gf from JURASSIC PARK. She is married to someone else. Bitch. 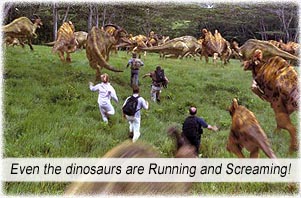 Sam Neill has a great authoritative role, and his delivery is always fun: “We haven’t landed yet!” “Mr. Kirby, tell her to stop doing that.” “If I lose you, it’s just me and the tourists.”

The feature saurian (meaning the One That Does The Most Chasing of the Running and Screaming People) is a Spinosaurus, bigger than a T. rex, with a sail like Dimetrodon (much more believable than those glued-on sails on 1950s iguanas) and with hands that actually work. Early on, we are treated to the Ali-Frasier of Dinosaur ringside – the Spino versus the Tyranno. There can be only one. Because the effects department complained.

For effects adrenaline, for believability of the dinosaurs, this movie is unbeatable (thanks to ILM and Stan Winston). That’s why it still scores in high mediocre. I don’t mind seeing all the dinosaurs – it’s what the movie turns them into that vexes me. I’m terribly vexed. They are simply Things To Run From. The few seconds of wonder come in barely noticeable snatches (where John Williams’s majestic theme would try and manipulate us into sharing the moment).

When I was a kid watching all those stop-motion movies (JASON AND THE ARGONAUTS, BEAST FROM 20,000 FATHOMS, VALLEY OF GWANGI) and those stinkers with iguanas with glued-on sails (KING DINOSAUR, THE LOST WORLD 1960), I was always aching to snatch a glimpse of something prehistoric – invariably there would never be enough “prehistoric” stuff (and the cavewomen never slipped nipple out of their furs). And when we did see the feature creatures, it was disappointing at best, as they were on a rear projection or interacting very suspiciously unrealistically with the actors.

So I’m envious of “kids today” who get served up movies like JP III; kids who are here for the same reason I was there back then – for the Running and Screaming! And see lots of prehistoric creatures in grand interaction with people.

But back to the subplots: When Grant finds out that the entirely likeable Billy has stolen some raptor eggs (with the “best intentions” – research and funding), he belittles him so thoroughly that we feel Billy’s humiliation like a hot flush. And we understand why Billy would later sacrifice himself. We wish we could see Grant retract his scathing derogation, but we don’t.

The science of dinosaur communication, appearance and habits has grown exponentially concurrently with the JURASSIC PARK films. Subsequently, the Velociraptors in the films have “evolved” from being dull brown to sporting rudimentary feathers and various colors; in JURASSIC PARK they simply roared, now in JP III, they’re honking and yipping all over the place like chicks at a slumber party – with “intelligence greater than primates.” (See? Like chicks at a slumber party – but only just.) I say, old chap, that’s all dashed interesting – but – shouldn’t the original DNA have brought out those characteristics in the very first cloned dinosaurs in JURASSIC PARK? Just because we’ve discovered it only now doesn’t mean that they weren’t always like that – their DNA should have reflected that!

Yes, fans, I have indisputably proven that JURASSIC PARK is Only A Movie!

Last scene shows pteranodons flying out over the ocean, the kid asking, “Where do you think they’re going?”

To JURASSIC PARK IV, of course.