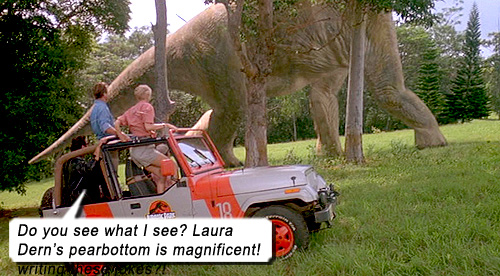 DINOSAURS! No, not “unbelievable” and “incredible” – on the contrary, director Steven Spielberg and his special effects team do such a mighty job recreating extinct saurians that they are altogether BELIEVABLE and CREDIBLE!

Spielberg is the visionary who brought us JAWS, CLOSE ENCOUNTERS OF THE THIRD KIND and RAIDERS OF THE LOST ARK – JURASSIC PARK is his Thriller. If you didn’t know his name before, you sure as dino-dropping knew it now.

Departing considerably from the Michael Crichton book of the same name (Crichton would pen the screenplay, and David Koepp would punch it up), JURASSIC PARK follows paleontologists Alan Grant (Sam Neill) and Ellie Satler (Laura Dern) to a remote island where billionaire entrepreneur, John Hammond (Sir Richard Attenborough), through a process of cloning, has brought actual dinosaurs back to life for a proposed theme park. (The cloning process, via dinosaur DNA found in ancient mosquitoes, and then augmented with modern-day animals, is ingenious, but specious.) Hammond wants the appraisal of experts, so also invites a lawyer (Martin Ferrero) and a chaotician, Ian Malcolm (Jeff Goldblum, clad in all-black to connote some kind of scientific hipness, we presume). Then there’s the target demo – two of his annoying grandkids, Arianna Richards and Joseph Mazzello as Lex and Tim.

Though Crichton’s book was an indictment against “tampering in God’s domain,” weaving paleontology, anthropology, evolution, chaos and genetics into a plausible tale of scientific arrogance, the movie is unrepentantly all about the DINOSAURS. And how – as Ian Malcolm portends – “Life will find a way” against any attempts to control or contain it.

The first sighting of the Brachiosaur is literally breath-taking, and when Hammond welcomes his charges with the line, “Welcome to Jurassic Park!” we are stunned into gape-mouthedness (as the characters are) with a long shot of Brachiosaurs and Parasauralophii herding by a lake, coupled with John Williams‘s fanfare theme, raising the hairs on the legs and driving a tear from the eye.

At this point, the film-makers had won. We were their bitches. There could be no more stop-motion or Harryhausen after seeing the grandeur and “real-ness” of Spielberg’s saurians. Working with the most revolutionary special effects (Industrial Light & Magic and the legendary Stan Winston Studio), Spielberg shows us Something Very Old as Something Very New.

And it was a Roarer. But the film (and the franchise) would never again be so wondrous. 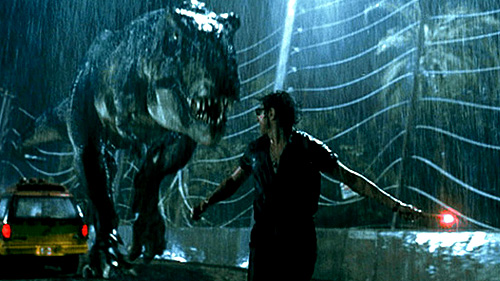 ”Feet, let’s make like a nomadic culture and get the hell outa here!”

For somewhere in the middle of the second act, Spielberg forgets why we love dinosaurs in the first place – for their uniqueness, their unattainable majesty, their awe-inspiring mystery – and instead of conjuring interest in the very fact that they live, they breathe, they walk like birds, spit like snakes and scream like jet engines, Spielberg gutlessly conforms to Hollywood movie convention, turning them into the film’s “villains,” the element that Our Heroes must run from. In the end, the dinosaurs could have been anything – zombies, a T-1000 from the future or Jack Nicholson with an axe – it made no difference. (The Velociraptor kitchen sequence, where Hammond’s grandkids are hunted, is especially wasteful, not only because the two kids at that stage have become so irritating that we’re rooting for the dinosaurs, but because Spielberg doesn’t make movies where kids get eaten. Ergo: no suspense.)

From being the wondrous subjects of the whole excursion, the dinosaurs are demoted to merely the catalysts for the Running and Screaming. And the movie degenerates to no better than its Harryhausen stop-motion ancestors. (I always watch this movie to the point where Ellie turns the electric fences back on. By then, it has soured enough to press Stop quite unregretfully and go finish the laundry.)

Spielberg ultimately fell into the trap created and abused by his pal, George Lucas – leaning on his scintillating effects and neglecting his half-baked story. Admittedly, the effects are DINO-MITE! (Somebody slap me.) The tyrannosaur alone is a juggernaut of adrenalin-charged mayhem, and its bellow is a frightful composite of elephants and lions and freight trains on steel wheels at midnight. And we can see how parents at the time were fearful that the ferocious intensity of the tyrannosaur attacks would give their kids nightmares. (Fear not, somehow this most bloody of terrestrial predators is reappropriated by film’s end to be the unlikely hero!) We also feast our optics on Dilophosaurus, Triceratops, Velociraptors (that look more like Deinonychus), Parasauralophus, Gallimimus, and a big fat horrible thing called Dennis Nedry Subplottus. 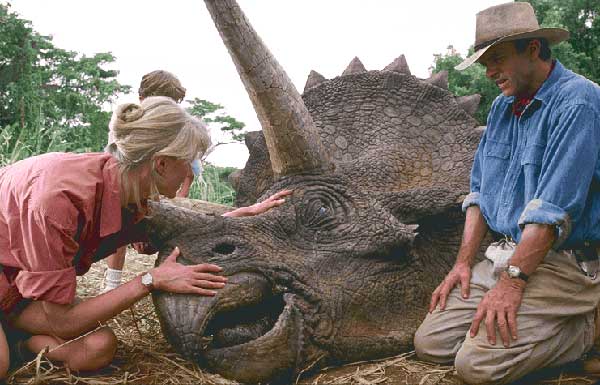 Dinosaurs! With all the frills!

Watch for Samuel L. Jackson as a tech (who uncharacteristically does not have the best lines), and Bob Peck as Muldoon the Great White Hunter (who utters two of the most  iconic lines: “Shoot her!” and “Clever girl!”).

Utilizing the most up-to-date paleontological data (including theories postulated by Robert Bakker in his iconoclastic tome, The Dinosaur Heresies), JURASSIC PARK shows us dinosaurs as “modern” as science can make them, pertaining to skin coloration, anatomy, physiology and behavior (although Dr. Grant’s proclamation of T-rex’s visual acuity “based on movement” was specious at the time of the movie – and it’s still specious!).

JURASSIC PARK succeeds with its technical finesse, its Mesozoic marvels and manufactured excitement, but could have been so much more than a techno-dino monster movie.

And I don’t suppose it matters to the Great Unwashed that most of the dinosaurs are not from the Jurassic, but the Cretaceous Period…

Rating the JP Media
(update: 2018, Jul 5)
In the grand scheme of JURASSIC PARK books and movies, how do they rate in quality, from best to worst? Well, this is just MY informed opinion, but it’s probably right… 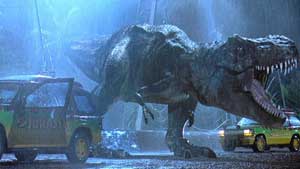 The T-rex escapes its paddock, which is level with the roadway where the jeeps are stalled. Then it pushes a jeep over the CLIFF where it just exited – from what was apparently level ground just two minutes ago! The cliff has been rationalized as a “moat” that surrounds all the animal paddocks (just like the moat that surrounds elephant and lion enclosures).
Okay – but the jeep lands in a tree! Not just a tree at the bottom of this “moat,” but a tree which is part of the jungle that Alan Grant and Tim escape into! It has been argued that the T-rex “stepped across the moat.”
Okay, but just before the fence goes down, we see a shot of the T-rex arm touching the fence, to denote it is not electrified any more. How did it reach its notoriously tiny T-rex arm to the fence across the moat?

It is now a well-known FACT that the T-rex had feathers, and thus wings. This explains everything: how it hovered and touched the fence with its tiny hands, how it flew across the moat, and how it flew into other animals’ paddocks across THEIR moats. Trust me, I have a degree from Flagstaff University of Cucumber Kineticism.