Why do we watch “dinosaur movies”? Well, for the DINOSAURS, of course! In that respect, JURASSIC PARK: FALLEN KINGDOM is at the top of the heap, with the best dinosaurs that 2018 CGI technology can render, hands down. With every roar, every stomp, every quivering of their neck wattles, we don’t doubt these prehistoric animals are more real than Bryce Dallas Howard’s rounded ta-tas. And I envy the kids of today who are witness to this era of photo-realistic dino-mation, over those poor kids (me included) who had to make do with Willis O’Brien’s stop-motion creatures on rear-projections, or endure Roger Corman’s iguanas with sailfins taped to their backs.

So if dinos are your diversion, go! Go watch FALLEN KINGDOM and enjoy with extreme prejudice! Or you can go for the easy charm and star-lord charisma of Chris Pratt, reprising his role as Owen, ex-Navy SEAL and Velociraptor wrangler; go for the angelic smile and high tight chest of Bryce Dallas Howard, reprising her role as Claire, the corporatist-turned-activist; or go for Millennial Urkel (Justice Smith, as computer nerdist), or Woke Minority (Daniella Pineda, as dino doctor). Or go for Jeff Goldblum’s cameo, trailers teasing him but then merely bookending the film with his chaotician Ian Malcolm, testifying on Life, uh, finding a way.

But don’t go if you are looking for an original story with three-dimensional characters. In Hollywood tentpole franchises – that’s extinct.

Literally throwing everything at the audience.

Writers Derek Connolly and Colin Trevorrow, and director J.A. Bayona throw together an old billionaire, a dinosaur expert and his woman, a dinosaur park, an evil corporation, a dinosaur geneticist, kids threatened by dinosaurs, and some realistic dinosaur special effects, and call it JURASSIC PARK—I mean, JURASSIC WORLD: FALLEN KINGDOM… and sit back and wait for the dolls to fly off the shelves.

The tourist attraction Jurassic World has been abandoned for three years, with the dinosaurs roaming free and unmolested by humanity. (Already I’m not buying it. Because I know humanity. You mean to tell me that after those attempts at smuggling and stealing dinosaurs in JURASSIC PARK (1993) and THE LOST WORLD (1997), not one wealthy mogul or mercenary was game enough to attempt any other illegal grabs of these unguarded animals?) Thus, the movie cold opens with a poaching mission, uh, after three years of no intrusion… Mercenaries poach a rib of the dead Indominus rex on the floor of the mosasaur tank (from JURASSIC WORLD, 2015).

Knowing the modus operandi of these Jurassic movies, we presume:
a) they are seeking its DNA, for
b) the next sequel, while
c) re-introducing the Mosasaur and Tyrannosaur in a gory opening sequence, so that
d) they can sell more dolls.

Suddenly we are slapped in the face with retconning. An old guy named Ben Lockwood (James Cromwell) appears out of nowhere, dying of Generic Movie Disease, and we discover he is known to all the characters in the story as the silent partner of John Hammond. He has a convenient One-Line Plothole Fix backstory because Hollywood thinks we’re fucken dummies. He funds Claire (Howard) to travel to Isla Nublar, where a volcano is about to erupt, and rescue all his merchandise—I mean, dinosaurs. After the retconning, comes the gaslighting – Lockwood: “This was all Hammond’s dream: to let these creatures live in peace.” What the freakin’ record scratch?! Hammond created dinosaurs to exploit them for profit in JURASSIC PARK, Old Guy Whom We’re Meant To Like Due To A One-Line-Plothole-Fix! But then…

Just like Hammond did a 180 and became a prissy philanthropist in the second Jurassic movie, Claire has caught HIV (Hammond Immunodeficiency Virus) and is also 180’d here, spearheading a dinosaur-activist group. As proof she is now humanitarian, she wears less hooker mascara, although she hasn’t skimped on the push-up bras.

For reasons of movie ticket sales, Claire asks Owen (Pratt) to join her rescue mission, using his old pet Velociraptor named Blue as bait: they can rescue Blue (and they also need her DNA for blah blah)… During this scene, I can’t help but wonder if the filmmakers are implying Claire is also meant to be tempting Owen with her own bait named Labia-majorus, because there is that urgent kiss later on during a moment of high anxiety – but there is zero chemistry in this sequel… Owen and Claire ended up as a couple after the events of JURASSIC WORLD, but in an attempt to re-cross that familiar romantic ground, the filmmakers have made them exes here, and contrive ways to recreate that sexual tension from the first film. But it doesn’t work – because we know they’ve pounded each others’ glottal stops. And the wasted money on the setup scenes could’ve gone to saving actual endangered species like the Siberian tiger or Alaskan ptarmigan.

Vanilla Rafe Spall is the slimy corporate guy supplying the vehicles and the henchmen—I mean, Rescue Team, led by Ted Levine (forever Buffalo Bill from SILENCE OF THE LAMBS). Their para-military outfit airlifts more dinos onto their freighter than either Owen or Claire could’ve facilitated. So – did we really need Owen and Claire? Oh, to open doors with her handprint. Sounds reasonable, considering you could just blow the doors down in this derelict park…

Claire and Owen end up on dinosaur island with two Millennials (Urkel and Woke), and the hunters—I mean, Rescue Team. Movie firstly tries to recreate the poignancy of the Brachiosaurus scene from JURASSIC PARK to remind us what franchise we’ve donated to, then sends Owen stealthily tracking Blue… Hunters double-cross Owen and Claire, bad screenwriting happens, cliché action sequences copied-and-pasted directly from the Running And Screaming Handbook, inserting [dinosaurs] into the field where you might otherwise write Terminators, Henchmen, Aliens, or Freddy Krueger.

But god dash it all! These dinosaurs are spectacular!

“Are the dinosaurs going to die, mommy?”
“Yes, my child.”
“Waaaaaaah!”

The stampede scene is brilliant, featuring a Carnotaurus, Allosaurus and various ceratopsians, ankylosaurids and diplodocids. During the stampede the carnivores cause havoc by still trying to eat the herbivores! As the volcano shoots burning rocks into the sky, with lava chasing down our heroes – a frenetic, brutal battle between a Carnotaurus and Sinoceratops! This is why dinosaur movies are made! Films like THE LOST WORLD (1925) and VALLEY OF GWANGI (1969), innovative though they were, pitted carnivore against herbivore in bland, stilted battle; this is what they were aiming for! I weep for those old filmmakers who could conceive of but never achieve this level of energetic realism, and I wish they could’ve seen these mind-breaking visuals!

Capping off the stampede is the only real poignant moment in the film: as the island is decimated, we see one lone Brachiosaur trumpeting mournfully on the dock, as the ship sails away from it, as ash clouds engulf it…

Levine and Spall are “saving” the dinos to auction them off to hedonists, officiated by Toby Jones. Turns out they didn’t really need Owen, Claire, Urkel or Woke at all. Which means, the movie didn’t need them either. It was just the marketing department that insisted Star-Lord and Bry and two annoying Millennials would sell more tix, so, yeh – “characters”!

Michael Giacchino composes, and does an amazing thing with just two notes of John Williams’s Jurassic Park Theme, stretching them out into full passages for key sequences.

Even though they try to connect Claire and Owen to the current plot – “You’re the parents of the new world” (because Claire authorized the Indominus experiments and Owen taught the raptors English) – nothing that anyone does matters in the least. It’s like the movie is going on with or without them: Owen finding Blue, Owen saving Claire from the sinking gyrosphere, Woke giving Blue a blood transfusion, Owen and Claire siphoning the blood of the T-rex while it sleeps, Maisie (Isabella Sermon) the little granddaughter of Lockwood being secretive, Geraldine Chaplin (Charlie’s real-life daughter) being governess to Maisie, a Stygimoloch busting Owen out of captivity, armed mercenaries everywhere whose guns are useless against any dinosaurs evah, Urkel opening doors with his computer skills and screaming like a pussy – all these things do not make a lick of difference to the final fact that numerous dinosaurs are brought to mainland America and released in the final scenes, in effect, to unwittingly create a real life Jurassic WORLD, as Goldblum presages…

As an example of how unimportant the humans are, there is a cold-blooded murder of an important character. It changes nothing, it doesn’t affect the dinosaurs, and we feel – NOTHING! 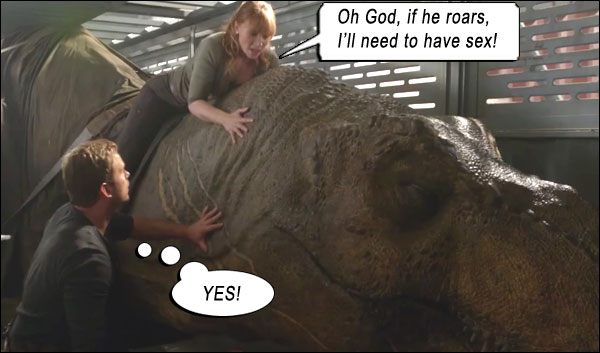 Dr. Henry Wu (BD Wong – hooray!) appears in the middle background, still feeling unappreciated for mashing DNA strands together and farting out abominations, in this case – the Indoraptor!

Let’s talk about the purpose of that abomination: Not only does the breeding of the Indoraptor rehash two plot points from the previous movie (‘splicing genes to create a hybrid,’ and ‘weaponizing dinos’), it only exists because the two “villains” from JURASSIC PARK – the T-rex and Velociraptor – have been rewrought by the franchise as “heroes.” Exactly like The Terminator and Loki and Darth Vader, what were once the baddest motherfuckers in the jungle are now considered vastly more lucrative as good guys – notice how the T-rex only kills the poachers from the first scene; it hardly even notices Owen right at its feet when it kills a dinosaur near their gyrosphere. At film’s end it reappears to kill only the bad corporation guy. So the filmmakers had to create a new “evil” dinosaur that would be the one to chase the humans and take the brunt of the audience’s malign.

The re-purposing was apparent during the final battle scene of the previous movie, where the “heroes” were quite obviously the rex and raptor, and the totally made-up evil baddie was the Indominus. Now, it’s so obvious it’s popcorn-throwable. This Indoraptor just oozes pure evil, with its frowning, slitted eyes, racks of jutting teeth and screaming stepchild attitude, and here’s the smartest innovation: To get this trained dino to attack, you’ve got to aim a gun with a laser sight at the Indo’s target, then push a button that emits a signal that sends the Indo into attack frenzy mode. Did I say ‘smartest’? I meant ‘stupidest.’ Because if you’re ALREADY AIMING A GUN AT YOUR TARGET WITH A LASER SIGHT, why not just pull the trigger yourself? And cut out the 5 billion dollar middle man.

Grown men wrote this. I think.

Poor Henry Wu only seems to be needed in these movies to whine about his work, and to pack away his lab at the end with all the little test tube dinosaurs! Onto the next sequel – away!

As Goldblum’s caveat from 1993 echoes over the end montage – “Humans and dinosaurs are going to be forced to co-exist. These creatures were here before us, and if we’re not careful, they’re going to be here after us” – we see the dinos busting out over the real world, including the coolest scene of all: the T-rex facing down a lion across its zoo moat – the king of the tyrant lizards roaring at the king of the beasts, roaring back!