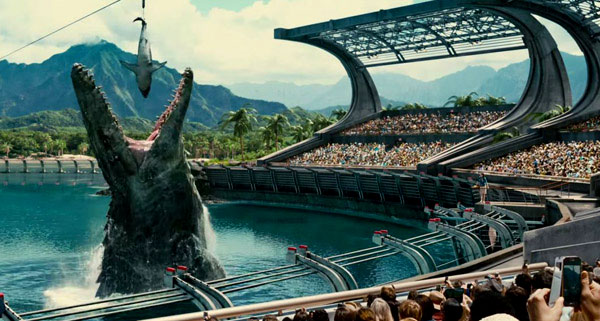 Can anyone say foreshadowing?

Owen’s summation is the perfect metaphor for this movie. The original Crichton-penned/Spielberg-directed JURASSIC PARK (1993) was a roarer-coaster that stunned even the most jaded of us primitives, and was a caveat against Tampering In God’s Domain. However, JURASSIC WORLD, the fourth installment in the franchise, hasn’t learned a thing from JURASSIC PARK’s inferior sequels (THE LOST WORLD JURASSIC PARK, 1997, and JURASSIC PARK III, 2001). It thinks that genetic modification of its premise will up the wow factor, forgetting that its premise is wow enough. Instead of focusing on the majesty and beauty and mystery of dinosaurs, JURASSIC WORLD, like its blood brethren, simply devolves into Running and Screaming. Again. A synopsis reads, “…in order to fulfill a corporate mandate, a new attraction is created to re-spark visitors’ interest, which backfires horribly.” Uh, are you talking about the story in the movie, or the movie itself?

JURASSIC WORLD (penned by Rick Jaffa, Amanda Silver and Derek Connolly, and directed and co-written by Colin Trevorrow, SAFETY NOT GUARANTEED) would like to believe it is self-aware enough to satirize itself – but this is not satire. It is predictable homage and venal plagiarism. Basically a remake of JURASSIC PARK, with better production values, more screaming extras, and sexier meat on the hoof (i.e. Bryce Dallas Howard (THE HELP) and Chris Pratt (GUARDIANS OF THE GALAXY)). 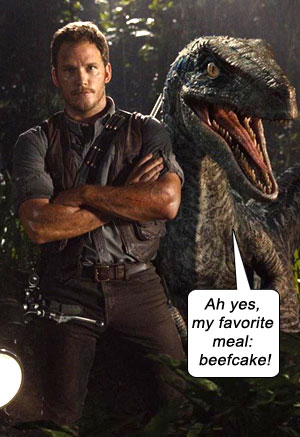 Curvy Howard with a terrible hairdo (as Claire) and buffed Hollywood golden boy Pratt (as Owen) are the perfunctory romantic subplot at the center of the fracas, ably supported by the smooth Indian stylings of Irrfan Khan (SLUMDOG MILLIONAIRE) as Masrani the park owner, Vincent D’Onofrio (ESCAPE PLAN) as a military knucklehead who wants to use Velociraptors as ground troops (only a military knucklehead could even conceive of this unutterable stupidity – show them a piece of cheese, they’ll try to weaponize it!), and Ty Simpkins (INSIDIOUS) and Nick Robinson (THE KINGS OF SUMMER) as Howard’s two nephews, lost in the park. Wait – two kids imperiled in the wilds of Jurassic World? Something smells as fishy as a Mosasaurus…

A park full of dinosaurs genetically reconstructed? Been there (but they call it de-extinction now). Two kids chased by carnivores? Done that (but the kids can actually act now). A dinosaur expert? Check (but Owen is also an ex-Marine, because – AMERICAN MILITARY BIG PENIS). Velociraptors? Yup. Still anatomically incorrect? Yeppers (but now they’re re-purposed to be the good guys). A villain who wants to use dinosaurs for his own evil ends? See JPII (but D’Onofrio is more evil – as per his bushier goatee). Herds of grazers accompanied by John Williams’s poignant, uplifting score? Single tear (but we’re in a gyrosphere now instead of a jeep). Star carnivore breaks loose and eats everyone? Yawn (but it’s a genetically modified specimen now, so – BIGGER SCARES BIGGER TEETH BIGGER AMERICAN DICK). In other words, the movie does exactly what it derogates the corporation in the movie for doing. And backfires horribly.

As the film opens, Jurassic World has been wildly successful for over a decade, yet having to raise its excitement factor every few years for modern generations who have grown inured to wonder. (It’s what saucy Patrick Stewart narrated about TED the talking teddy bear, “No matter how big a splash you make in this world, eventually, nobody gives a shit.”) If real dinosaurs are ever spawned in these internet-sodden 2010s, the wow factor would last exactly a month, until the social media glut of peabrains and dimwits destroy the novelty.

Owen is called in by Masrani to examine the park’s new corporate-sponsored “created” predator, called Verizon Wireless Presents the Indominus Rex (reportedly bigger and badder than a T. rex, presumably because the T. rex would laugh itself to death over the name). Masrani has taken the reins from original irresponsible owner John Hammond (Richard Attenborough, here just a statue) and has retained veteran Scientist Guy (B.D. Wong, the only actor from any other Jurassic film to reprise his role here) to create hybrid dinosaurs, to cater to the board of directors who want MORE teeth MORE attendance MORE money. Last seen singing “Party Pooper” to Steve Martin in FATHER OF THE BRIDE PART 2 (“Every party needs a pooper / That’s why we invited you / Party Pooper / Party Pooper”), B.D. will prove to be Jurassic World’s own Party Pooper. 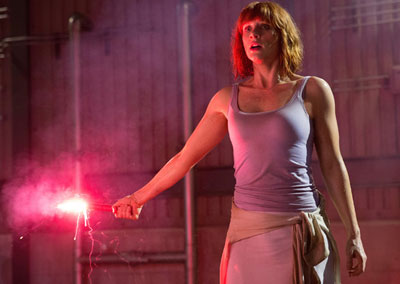 B.D. gets his chance to shine here, in a grand moment of playing God: “All this exists because of me!”; launching into a screed that explains why the dinosaurs look the way they do (for all those sophisticates who may have a problem with the dinos’ coloration, size, anatomy, etc.). “Nothing in Jurassic World is natural! We have always filled gaps in the genome with the DNA of other animals. And if their genetic code was pure, many of them would look quite different…” It’s actually a great example of scriptwriting; creating those one-liner rationalizations that economically defuse our disbelief. He even offers some welcome relativism in the face of everyone vilifying the carnivores as if they were evil. “Monster is a relative term – to a canary, a cat is a monster. We’re just used to being the cat.”

For all his CEO stank, Masrani is concerned with the animals’ emotional wellbeing. He is not painted as a bad guy, to the movie’s credit, and I thought his jovial attempts at flying helicopters (“I got this!”) would pay off humorously or dynamically. No, written out in the third act, presumably because Irrfan Khan’s salary went towards that hedonistic mosasaur aquarium… He tells Claire – who is concerned only with graphs and projections – that you can see the animals’ emotions in their eyes, which would prove heartbreaking later, as she looks into the eyes of a brachiosaur taking its last breaths, the victim of Verizon Wireless Presents the Indominus Rex. Touching moment, as we discover the carnivore is killing for sport. Which is exactly what Verizon Wireless does – so why the long faces?

You know what I would love to do? Take a tour through Jurassic World like those tourists. In the movie, just take us on a trip to watch dinosaurs in their natural habitat. That would be a true thrill ride! No fences breaking, no corporate agendas, no Running and Screaming. As it is, Universal and Amblin have just wasted the last third of my purchase price. I’ve come to see wondrous dinosaurs, not Things To Run From; they might as well be zombies or lions or vampires or Germans or the San Andreas Fault fer chrissakes. Can we respect the carnivores enough not to vilify them as villains? And are we that bored to death with existing dinosaurs that a fake one has to be invented? It’s reached a point of diminishing returns. How much more fierce than a Tyrannosaurus can anything get? Do you need to be more fierce than the most fierce thing ever on planet Earth for me to like you? Exactly how insecure are the shrew minds behind this movie? They’ve got dinosaurs in the plot – and the best the shrew minds can come up with is making the dinosaurs chase people? I like dinosaurs because they’re dinosaurs – wow enough. Chasing me won’t make me like you any harder.

Movie Rule #24: No chasing, no screaming, no box office.

Meanwhile, everyone forgets the real fiercest, biggest predator on the planet, until the film’s final frames…

It’s not just the chasing – it’s the “re-purposing.” Remember when Darth Vader was the bad guy? Remember when Arnold Terminator was the bad robot? Remember when Velociraptors were bad dogs? To keep braindead audiences happy, all these fierce creatures were re-purposed in their sequels as “heroes” to give them broader appeal. I… HATE that. Hate it!

As we see the tyrannosaur-as-hero, in slow motion vermilion, dissolve from the darkness and come crashing into the frame through its own display skeleton, we have to ask ourselves, “Why is the T. rex being regarded as pal to humans?” (Hell, even in the first movie, the T. rex was re-purposed by the end of that very movie to be the good guy.) And after the T. rex saves the day, why is everyone happy and gay, like the danger has passed?… Hel-LO?! Now there’s a T. REX loose in the park!

The peanut gallery explodes: “It’s just a movie, Poffy – it’s meant to be fun!” Yes, though it is derivative, formulaic and plagiarized, JURASSIC WORLD is still a lot of fun. Of course, there are the dinos, as real as ever; and they’re fast, not plodding, as per Bakker’s iconoclastic theories. And though it’s ridiculous that Claire would wear those pump-me pumps through her whole jungle adventure, at least they keep her invisible pantyline high and her melons forward. And for the ladies, Pratt wears that t-shirt two sizes too small, talking through his lats and rhomboids; and there’s that chick-meat movie poster: Who needs a Ferrari when you’ve got four pet Velociraptors?… Probably the best moment is when arrogant military twit is giving a grand soliloquy about nature favoring the raptors as weapons for Americ— and he is unceremoniously cut off by a raptor that busts in and eats his arm. Now that’s the kind of Party Pooper I like.