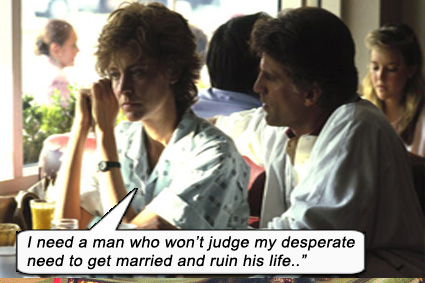 Sam Waterston is Chip’s unassuming shy pal, who is the “fourth wheel” in this farce that turns poignant and then strangely detached. As a not-so-subtle metaphor, Chip is a seismologist, always talking about aftershocks, which is exactly what these people experience after the big affair reveals.

For all the dire circumstances these characters are put through, I can’t figure whether they are acting “realistic” in their detachment, or just not getting crazy enough to be believable. Written and directed by Allan Burns, FRIENDS has to get very tragic for its ironies to play themselves out.

Plot points you can see coming: single mother Sandy laments that she would like to get pregnant but there are no suitable men about (the type of talk that inspires a man to leave the room in a daze of hyper-boredom) – and finds that Holly’s husband has made her pregnant.

Plot points you can’t see coming, but that don’t matter anyway: Sam Waterston’s character is so shy you wonder how he ever got married, let alone sired a child, yet after innumerable jump cuts, we catch up with him divorced, with a hefty beard, and involved with the two MILFs almost as intimately as Chip was.

Shots of both MILFs in tight aerobics gear or tiny panties should keep this film interesting to a demographic not yet worried about mortgages.