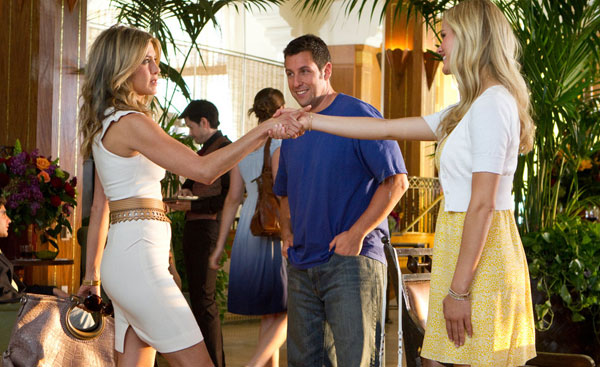 Adam Sandler in a blonde sandwich. Proof that there is no God.

Going for mangina. And succeeding.

Well played, Mr. Sandler! He’s a bachelor wooing a younger girl with the lie that he will soon be divorced, and getting Jennifer Aniston to JUST GO WITH IT and pose as his ex to aid the ruse. It’s dumb as hell, but Sandler plays it very, very cool. (Don’t tell anyone, but I laughed out loud many times.)

Danny Macabee (Adam Sandler) is a philandering plastic surgeon who works on topless women whose nipples we never catch a glimpse of. (Because apparently that will turn kids into mass murderers.) His assistant Katherine (Jennifer Aniston) is confidant to Danny’s tales of debauchery – which involve flashing a wedding ring to pretend he is unhappily married – and the opening scenes illustrate how much easy chemistry they share. When Danny asks Katherine to pose as his ex-wife to aid his courtship with painfully-delicious Palmer (Brooklyn Decker), it’s already obvious the whole movie is a setup to pair Danny and Katherine, and any obstacle that comes between them is going to be a device upon which to force comedy.

The plot is so obvious that Sandler himself seems to have given up on the artifice of “character” and decided to play it natural, as if he’s just walked on set for a few laughs; he seems to be having the time of his life just being in the movie business and making this movie. And any time Sandler eschews his imbecile persona onscreen for a natural, likeable Everyman, I actually like him – as a comedian, an actor, and part of the human genome project. And Aniston has not been this natural and sexy and cute for a decade. This is the girl we all fell in love with years ago, making us fall in love all over again. And Brooklyn Decker, with her double-D double-deckers set on stun, just pisses me off. And by ‘pisses me off,’ I mean I want to bang her till we’re both crying.

Nick Swardson is Sandler’s new bottom bitch, gradually replacing the unfunny Rob Schneider in Sandler films. Here, Swardson is a fourth wheel, mock-playing an Austrian named Dolph Lundgren, as a device to push onto Palmer, so that her scorching hotness is not left bereft after Danny dumps her. Kevin Nealon, also a Sandler staple, appears in a cameo that is actually funny, for the first time in his wretched filmic career. Precocious Bailee Madison annoys us as one of Katherine’s outspoken kids.

We immediately sniff that this movie’s implausible plot is from another age – it is, in fact, a remake of CACTUS FLOWER (1969), which was in turn adapted from a French play; it reads like one of those old Cary Grant farces, where everyone is talking too fast and doing quick turns and hiding something behind their back to avoid an approaching person from seeing it; where people can’t see through the obvious lies and bad acting coverups of the people pulling the ruses… it’s asking us to suspend a lot of disbelief.

For example: Danny is extorted by Katherine’s kids to take them all to Hawaii – and he actually pays for the trip! Okay, suspend that. Palmer and “Dolph” tag along, and Palmer – instead of being pissed off that Danny’s ex is with them in this romantic location – continually involves Katherine and the kids in all her vacation plans. Really? That’s the first instinct of a hot chick who is interested in you? To involve a woman that has a history with you, on your romantic getaway? Okay, suspend that. The film started its slide into stupidity when Palmer appeared with a “17” magazine at the airport. Again, really? The filmmakers have gone to all the trouble of painting her as mature enough for Danny to fall for, as sensible enough to spend a talk-date night with him on the beach, yet suddenly she has to look immature alongside Katherine – and “17” magazine is how they’re representing that? Okay, suspend that. And is she that incognizant not to realize that Nick Swardson is putting on that Jerry Lewis “Cherman” accent? Maybe that scene where they’re all walking across a shaky suspension bridge is a metaphor for the whole movie?

Film is saved by the fact it never goes for punchlines, but for humor, and finds a little poignancy as well.

Suddenly – Nicole Kidman, in a hilarious, broad role as Devlin, the snooty girl from high school, with Dave Matthews the Musician cameoing as her ambiguously-gay husband. After her wide variety of work, serious and otherwise, Nicole can afford to relax and phone in this clichéd stereotype for our enjoyment. She used to be another woman who pissed me off, and by pissed me off, I mean… well, you know…

Sting features heavily on the soundtrack with remixes of Police songs and his own material. Better than hearing lame covers sung by young chicks trying to sound “sensual.”

Directed by Sandler staple, Dennis Dugan, movie resolves exactly how we thought it would, making sure Danny never actually beds Palmer through the whole Hawaiian weekend, as that would make him seem like a whoremonger while he’s supposedly falling in “real” love with Katherine. Yes, the same Katherine who KNOWS he is a whoremonger from all his whoremongering war stories he’s told her – a whoremonger until RIGHT NOW, I guess, when he says he likes her smile or some maudlin shit…

Either you can scratch out your eyes with all these done-to-death tropes and contradictions and incognizant reactions, or you can enjoy yourself by doing what Sandler himself seems to be doing bemusedly, looking amazed that he’s been paid to do yet another Adam Sandler film – just go with it.