Wax On, Whacks Off. 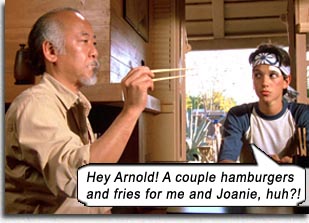 A bean stem moves to a new school in Los Angeles and proceeds to take regular beatings from the school bullies for sniffing around the head bully’s ex-girl. He takes karate lessons from that guy from HAPPY DAYS – karate not for philosophy or exercise or discipline but to beat up the bullies. Two wrongs make a right, kids. And here come de orchestra swell…

THE KARATE KID is yet another retelling of ROCKY. With a hero not so much Italian Stallion as Italian Ferret.

Bean stem is Daniel (Ralph Macchio, who can’t stop looking like Cha Chi), his Japanese karate mentor is Mr. Miyagi (Noriyuki “Pat” Morita aka Arnold from HAPPY DAYS). Daniel’s puppy love is Ali (lovely girl-next-door Elisabeth Shue, attired in sensual schoolgirl outfits most of the time (yum!), and displaying her penchant for pining after losers, which would lead directly to her hooker-falling-for-alcoholic Nic Cage in LEAVING LAS VEGAS, 1995).

Macchio shows us that he is almost as bad an actor as the extras and B-cast, and I can imagine Catholic priests lining up in droves to touch that smooth girl-face of his. Clint Eastwood has been known to complain that his son Kyle should’ve gotten the Karate Kid role over “that pussy Ralph Macchio,” but I disagree. Kyle Eastwood could never have pulled off the effeminate dorkmeisterism of Macchio – and for that, Clint should be eternally thankful. 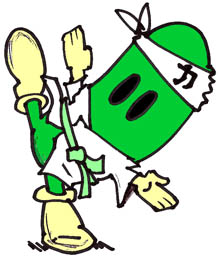 So Miyagi sets “Daniel-san” on a regimen of painting his fence (“up a-down, up a-down”) cleaning his cars (“wax on, right hand – wax off, left hand”), painting his house (“left a-right, left a-right”) and sanding his deck (“sand a-left, sand a-right”).When Miyagi eventually demonstrates to Daniel the practicality of all that waxing on and painting left and sanding right, we realize how amazing his training methods are – if Daniel were ever attacked by a Handyman. Or an opponent willing to hold all his punches in mid-air and wait for Daniel to block them. It makes no difference anyway, since Miyagi’s demonstration attack-punches do not actually extend to Daniel’s body, stopping about a foot in front of him. Because karate is all about honor – all you have to do is find an opponent honorable enough not to actually hit you.

The school bullies are led by Johnny Lawrence (William Zabka) and all happen to be blond, Aryan jocks who study karate at the extremist Cobra Dojo (run by Martin Kove), whose peaceful slogan is STRIKE FIRST. STRIKE HARD. NO MERCY. You know, just like modern-day evangelical Christians.

Directed by John G. Avildsen (no coincidence he also directed ROCKY), with a soundtrack that is arguably the worst disco music of 1984, including You’re The Best by Joe Esposito), THE KARATE KID has been called “the sweetest surprise of 1984.” It’s a surprise all right: that people still believe the maddening fallacy that karate will help you in actual street situations. This very fallacy is proven by the movie itself: in the climactic karate competition showdown, the Cobra Dojo cheat – one of them is instructed to break Daniel’s leg, which he does quite easily – but if karate was such an effective defensive tool, shouldn’t Daniel have been able to block that actual strike?

The bully that broke Daniel’s leg is disqualified (apparently, if you really prove that karate has any dangerous utility, they penalize you for it) and Daniel then has to perform his last fight against Johnny Lawrence on the broken leg (which raises all sorts of health and safety questions about the Karate Organization running this show).

And Daniel adopts the now infamous crane posture and kicks the bully in the face, winning the competition. Which raises another question: When Daniel actually kicks Johnny – why isn’t he also disqualified for making lethal contact? We’d probably find out if the orchestra swell wasn’t so loud and embarrassing.

But let us not forget the lesson of the film: the key to good karate is carpentry.