From Zeroes to Heroes.

World War II. A small troop of American soldiers surrounds the German-occupied French village of Claremont, closing in slowly over the rooftops and through the ruins. Thirty miles behind enemy lines, isolated from their own army, one Sherman tank their only armored support against three superior German Tiger tanks, they’re not here to fight a battle.

They’re here to rob a bank. 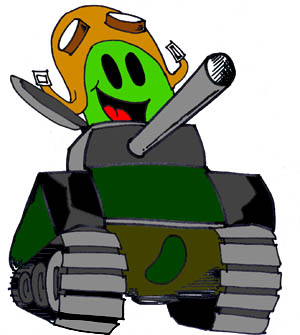 These misfits hear of a cache of 14,000 German gold bars behind enemy lines and – led by Pvt. Kelly – take a detour from their futile war effort to heist it. Like THE DIRTY DOZEN without the meticulous planning. One: down to the road block we’ve just begun. Two: the guards are through. Three: we’re ALL on a spree!…

Released smack in the midst of the Viet Nam war (1970), the film’s coterie of quirky characters more readily reflects that era’s disheveled anti-establishmentarians, rather than the somewhat grittier G.I.’s of the actual Second World War. Which accounts for Oddball’s hippie commune of  “flower children” – a species that did not yet exist at the time of this movie’s supposed period.

In their quest to pull off the perfect crime, with an actual pot of gold (worth 16 million dollars) at journey’s end, Kelly’s “heroes” inadvertently win battle after battle, carving a swathe of allied territory straight through the heart of German occupation – to the chagrin and delight of General Colt (frenetic Carroll O’Connor), who believes these troops are ploughing patriotically through enemy lines despite the hesitance of their commanders.

Languidly directed by Brian G. Hutton (who also directed the other Eastwood war movie of this era, WHERE EAGLES DARE), this movie would have fared better – as a more entertaining diversion and as a better story – if it had concentrated on the aspects which separated it from other war movies of its day – the heist angle and the comedy – rather than adhering to war movie convention so perfunctorily: machine guns blaze away at every opportunity, mowing down Germans who couldn’t hit the side of a barn, with carpet-bombing padding out large segments of screen time. Being a “war movie,” Hutton obviously received a fat explosives budget – and by Jerry Bruckheimer he was going to use it! 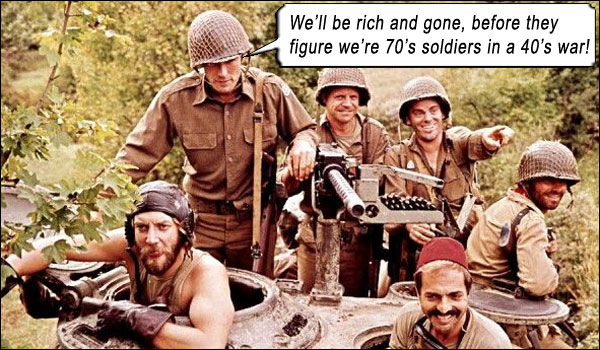 By the time they reach Claremont, Kelly’s armada of companies has been whittled down to only his troop and Oddball’s one remaining Sherman. After his troop disables two Tigers, Kelly must find a more subtle way to subvert the last remaining Tiger, dug in directly in front of the gold-laden bank.

And Sergio Leone comes to the rescue!

In a scene directly spoofing one of Clint’s own DOLLAR standoffs, he faces down – across an expanse of dusty street – a Tiger tank. Joined by Sutherland and Savalas, and accompanied by Lalo Schifrin‘s score emulating one of Ennio Morricone’s evocative passages (i.e. close your eyes and you’re back in FOR A FEW DOLLARS MORE), they grimly (yet almost smirking for the audacity of the in-joke) stalk towards the tank, whose occupants silently regard this display of bravado – or temporary insanity. All that’s missing are the spurs and ponchos.

From out of the tank steps the commander (Karl-Otto Alberty, oozing such searing Nazi authenticity it’s a wonder he wasn’t indicted for war-crimes after the film). Kelly’s plan: like any good American entrepreneur – to Make A Deal. “All you have to do to have an equal share in this money is crank that turret around – and blow a hole in that door.”

Once again, though other movies may have united Germans and Americans in touching tableaus serving to illustrate the meaninglessness of war, this movie unites them in a decidedly Marxist twist – the proletariat partners in crime united against the capitalistic bourgeoisie.

Amidst the French celebrating in the street (thinking they have been liberated), with General Colt mistaken for de Gaulle by the revelers and mobbed before he can discover the decimated bank and American soldiers making off with its loot, Lalo Schifrin’s and Mike Curb‘s strangely nostalgic and immortally memorable theme, Burning Bridges, plays out the credits, as Kelly’s unlikely heroes load the last of the gold onto their truck and literally drive off into the sunset.