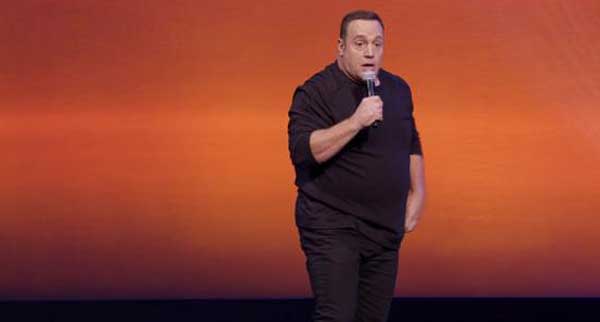 Never don’t give up that third piece of cake.

Let’s see: if a comedian still hasn’t said anything remotely funny or intriguing or insightful 32 minutes into their set, you can pretty much guarantee the rest of their 1 hour set is going to be just as shallow, unfunny and lame, right?

Such is the case with the simpleton humor in KEVIN JAMES: NEVER DON’T GIVE UP, a standup comedy presentation for people who have just come out of surgery with stitches in their mouths making it hard for them to laugh without extreme pain; thus, they can safely watch Kevin James and not worry about even cracking a smile.

After spending his adult life saying unfunny lines written for him by other people (in a lifetime’s worth of unfunny sitcoms), Kevin James writes his own unfunny lines for himself in his Netflix Comedy Special, filmed in New York.

And now we know why he’s in so many Adam Sandler films.

Any comedian who starts their set with a gag about having to hold a pose too long while someone tries to work a camera phone really doesn’t belong on a standup stage. And this is an important set – being filmed for Netflix – and the star of such intellectual hightowers as PAUL BLART: MALL COP and GROWN UPS 2 has no opening zingers? The first few minutes roll by so awkwardly, I wondered why the producers of the show didn’t edit them out neatly. It’s not just me who is unaffected by the bulbous charm of Mr. James; listen to the non-existent roar of that crowd… blissful library-silence… You can count the laughs on one hand or less.

I’ve never known Kevin James as a stand-up comedian, so, just for laughs (sorry, I said ‘just for laughs’ – didn’t mean to get your hopes up), I checked out his history, and found his first Comedy Special, SWEAT THE SMALL STUFF, way back in… way… way back in… 2001. Hmm, 17 years away from the standup circuit; maybe he’s a bit rusty [– Oh, ya think?!] … and it’s 2001, you know, the year of that disaster… what could go wrong? And I click through that Special randomly, and I see – Movie Maniacs, I kid you not – I see the SAME ELEVATOR GAG that I just saw in the 2018 Special! Back in 2001, there’s Kevin James telling that same joke – word for word! We all know comedians have their favorite bits (or audience favorites), but even those bits gradually develop over the years, as the comedian crafts them leaner and keener, mixing ‘em up, adding to ‘em… Nope – not with Kevin James, boy, nosirree! Folks, the exact same gag about getting off on the wrong floor and having to pretend it’s the floor you wanted. Word. For. Word.

So I guess he’s either still doing absent-minded shit like that – or, tragically, he thinks that bit JUST KILLS. Are you kidding us with the lack of new material, Kevin? After 17 years?! Are you kidding? Well, obviously not, otherwise it would be funny.

Now, of course his audience is laughing. They paid their money to see a comedian they find beloved. Oh, see how they laugh! What are they – STUPID? Because I figure that a Kevin James audience is populated with fans of his sitcoms, and to enjoy those sitcoms, you require an IQ level somewhere near goldfish. And I realize: That’s why Kevin can repeat his bits, because goldfish have a memory that lasts the length of a 3-foot fish tank, seeing that same little castle that you forgot was there just one minute ago.

The inane bits roll off Kevin’s tongue: elevators, moving walkways, lactose-intolerant people, nut allergies, friendly waiters, a cigar given to him by a cop in a raincoat on a film set— this bit, we imagine, was going to skew into the cop being a pervert or an escaped convict or anything interesting – but no. It’s all about the cigar. And during most of his bits, Kevin will self-flagellate about being fat. Because we couldn’t guess that a fat guy has eating disorder guilt.

Does Netflix really think that, due to Louie C.K.’s irrational ostracism by the MeToo extremists, we’d slip and forget and just start laughing at any ersatz white fat guy telling jokes onstage? LOUIS C.K. HOW WE MISS YE!

I didn’t watch long enough to get to the explanation about the title, or I’d tell you about it, to waste more of your day. Or maybe you already know all about it, if you watched his Special from 2001.