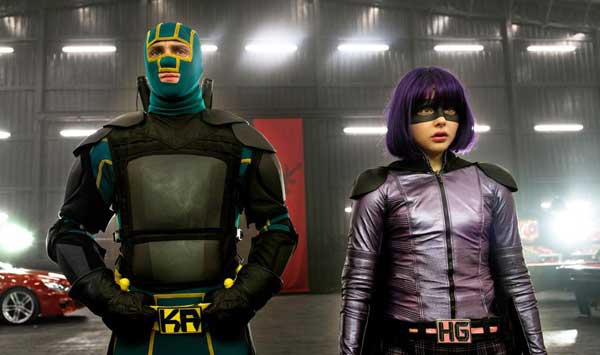 Hit-Girl graduates to Batman with Kick-Ass as her Robin.

Kicks it up a Cerebral Notch.

No matter that KICK-ASS 2 loses the precocious and comedic tone of its predecessor (KICK-ASS, 2010), it remains a scathing exposé on the real world consequences of superheroing in a world that is more evil and twisted than any comic universe can comprehend.

The violence is graphic, the swearing is viciously funny, the colors are glaring and the action is livid, but the best aspect of KICK-ASS 2 is how it displays an understanding of consequences when it transposes comic book ideals into the real world environment.

The crime-fighting exploits of college boy Dave Lizewski aka Kick-Ass (Aaron Taylor-Johnson) have inspired myriad masked heroes taking to the streets to combat wrongdoing. However, just as every action creates an opposite and equal reaction, the new rash of “heroes” spawns a new breed of villain, that matches the heightened tenor of the heroes. The young man whose gangster father was killed by Kick-Ass, Chris D’Amico aka Red Mist (Christopher Mintz-Plasse), tips into psychotic, renames himself The Motherfucker, and accrues a team of insane criminal acolytes to create murderous havoc in the city, while he seeks vengeance on Kick-Ass. Mintz-Plasse’s performance teeters on the precipice of cheese and melodrama, but he infuses it with a somber darkness that grounds it in real world psychosis; frankly, an amazing nuanced job, which we do not expect to be so convincing.

The hero and villain being two sides of the same problem is one of the excellent implicit messages in KICK-ASS 2 that will go largely unnoticed. Toward the end of the film, Dave muses on the fact that his “superhero” may have been directly responsible for creating the “supervillains” to oppose it: “Upon defeating the Motherfucker and his army of criminals, did we make the world a better place? Or did we just finish what I started when I put on the mask?”

Meaning, the creation of the HERO spawned the VILLAINS (rather than the other way round, as in the Batman universe). In other words, as you ramp up the size of your armed forces – thinking that will stultify enemy resistance before it starts – there will, in fact, rise up bigger and more radical insurgency towards your armed forces, to match them in force and fury — cough– Middle East. It’s the evolutionary race between predator and prey; as prey becomes tougher, more cautious, more camouflaged, predators become more ferocious, cannier and more perceptive. The vicious circle spirals out of control.

KICK-ASS 2 is also a coming-of-age tale, for the actual star of the movie, Chloe Grace Moretz as Mindy/Hit-Girl. A KICK-ASS sequel had to follow the fate of the young superhero girl raised by the city’s first true superhero (Nic Cage as Big Daddy, who died gruesomely in the first movie). Mindy is now trying to fit into “normal” society under the watchful eye of her father’s cop partner, Marcus (Morris Chestnut). After slumber partying with the “mean girls,” after the cheerleader tryouts and the dating scene (which surprisingly doesn’t include a date-rape attempt, but a vanilla date-dump scene!), Mindy will come to realize her destiny is, in fact, being Hit-Girl. But it would come at a price that few superhero movies address: her vigilantism in the final killing spree would cause her own guardian Marcus to come after her on principle, even though his vow was to take care of her. And Hit-Girl embraces her vigilantism, knowing she cannot help but be an outlaw. So on the one hand it’s acceptance of her fate; on the other, she is admitting to willfully abrogating the social strictures she is trying to preserve. Whether Hit-Girl is hero or villain is perception in the end. That flawless skin, those chest buds, those anemone lips and blond tresses inform me she’s hero. (Although a flaw in the story is in thinking a trained killer like Mindy would be as hormonally affected as regular teen girls when it comes to dates, bullying and boy-bands.)

Writer-director Mark Wadlow has judiciously brought the Mark Millar/John Romita Jr. graphic novel to life as an adult film. Just because the word superhero is bandied about doesn’t mean KICK-ASS 2 must automatically be perceived as simpleminded or juvenile.

This franchise is so powerful because it couches all these concepts in a wholly entertaining, satisfying wallop to the limbic part of our brain. It’s got all the fun elements that Marvel sluice into their kids-movies-disguised-as adult fare (screaming colors, quips, punching), and then it steps up the intensity with R-rated familial sacrifice, beheadings, cop-killing, finally throwing in morally ambiguous darkness (vigilantism, redemption from past sins) that many will miss precisely because they equate this genre with baby-minded diversions. 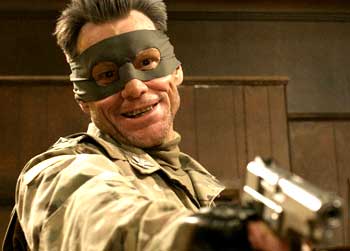 From Pet Detective (good), to The Riddler (evil), to The Colonel (morally ambiguous).

Jim Carrey is Colonel Stars and Stripes, leading a wannabe crimefighting team called Justice Forever; he’s a rampaging neurotic who will blissfully cripple criminals whilst chastising his team for taking the Lord’s name in vain. Full credit to Carrey for once again burying himself in a role where he is practically unrecognizable, but demerit points for him going rogue against the film’s marketing campaign and denouncing his violent character after the Sandy Hook school shooting in December 2012. One thing has nothing to do with the other, and it’s sad that Carrey unnecessarily entwined his ego in the inevitable subsequent non-sequitur debate over gun control. If Carrey had said nothing, no one would have suffered any less or further; not the film, not his career, not the families of the victims at Sandy Hook, but by inserting himself into the narrative, he effectively drew attention away from any real issues. Any news story featuring Carrey’s disavowal of the film was now an “entertainment” piece.

The film’s potent messages were also diluted by Carrey’s stunt. The KICK-ASS series illustrates how violence begets violence, and that “for real people who try to be superheroes, eventually, it had to end too.” Things fall apart; the center cannot hold with a violence-against-violence ethos. There has to be something more – and this movie provides that answer: Dave narrates that “superheroes can’t exist in the real world for a reason – because the real world needs real heroes, and not some punk playing dressup!” Amazingly, in this Hollywood blam-fest, the difference between “hero” and “vigilante” is defined – a vigilante might enact justice on purse-snatchers or corporate thugs, but a hero will also aid those in need of food, clothing, shelter, a helping hand – one of the very traits Carrey’s Colonel emphasizes in low-key scenes that do not include blammo! And Carrey himself missed this salient point by shooting his mouth off like an incognizant turnip.

Taylor-Johnson has ripped up himself for the role of Dave. He’s meant to be a wimp, trained by Moretz’s teen Mindy (who is also in stunning shape), but as soon as he takes his shirt off, it looks like his physique has been sprayed on by Marvel Comics. Gone is the dynamic between them – that of a bigger brother with a more adept and lethal little sister. At the conclusion of KICK-ASS, when Dave flew Mindy home in the jet-pack (under the cosmic majesty of Marius Vries’ Flying Home theme), it was innocent and loving and platonic. No matter Mindy’s foul mouth and killing skills, she was an 11-year-old schoolgirl. Now they are on the same sexual playing field, so besides all this lust in my groin being legal, their interaction is somewhat confusing.

At the conclusion, it is sad to see Mindy leaving Dave to motorbike across a bay bridge (that old symbolism of “crossing over”), but maybe the sadness stems from that poignantly uplifting Flying Home theme, tying the franchise together and edging a tear in our eyes. We imagine Dave and Mindy would end as an item, but the film skews more realistically by leading Dave sexually afield, setting him up with three women in his orbit: his distant girlfriend (an insipid cameo by Lyndsy Fonseca), his fantasy infatuation – Hit-Girl, and his ferocious animal lust – Night Bitch… 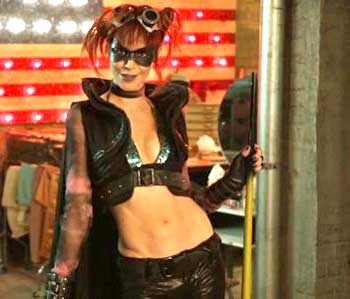 Ah, Night Bitch (Lindy Booth), a supergal on the Stars and Stripes team, with a torso so delectably deliriously delicious, it remains nakedly exposed for the better part of the movie, even though any combat specialist will attest that is probably the worst and most ignorant way to enter into lethal battle – unless you’re Michelle Rodriguez.

Donald Faison is hero Dr. Gravity, and Israeli bodybuilder Olga Kurkulina is villain Mother Russia; whereas Clark Duke was merely one of Kick-Ass’s nerds in the last film, now he’s in on the super action as Battle Guy; Evan Peters was Kick-Ass’s other nerd friend – but he actually graduated to a real super (Quicksilver in X-MEN: DAYS OF FUTURE PAST!) – replaced by dorkier Augustus Pew as Ass-Kicker.

KICK-ASS 2 is still about the hero’s journey – Dave trying to find his purpose – but I believe the untapped gem of the series is Hit-Girl. Her character is indoctrinated as a super from a young age; she knows nothing else, and of all the characters – heroes or villains – she alone is imbued with that psychosis inherent in all great superhero characters. Her polar opposite is Motherfucker, who embraces his pure evil. These two are the Batman and Joker of this franchise. Kick-Ass himself is, unfortunately, kinda the Robin.