Call me damaged goods, but I’m in love with Hit-Girl. And if her challenge above is how we approach every moviegoing experience, the moment 11-year-old Chloe Grace Moretz (as Hit-Girl) utters that taunt, the movie proves itself an irreverent, unrepentant, ruthless runaway rocket. In my pants. 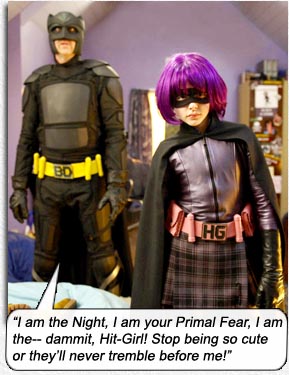 Based on a comicbook by Mark Millar and John Romita Jr., KICK-ASS is an assault on our superhero complacencies; an adult superhero movie about kid superheroes. Satire, comedy, treachery, anarchy. ULTRA-VIOLENCE. Don’t bring the kids. The heroes may be young but they are not role models. It is for adults to understand this is a spoof on vigilante justice. Even Christopher Nolan’s “dark” BATMAN movies dilute violence for PG-13 consumption, but Matthew Vaughn‘s R-rated KICK-ASS steers into the curve of carnage.

Dave Lizewski (Aaron Johnson), a teen superhero-comics geek, dons a costume to stalk the night and deter small-time crime as “superhero” Kick-Ass. In the real world of actual street criminals Kick-Ass is an untrained, unmustered naif and gets his ass kicked quite thoroughly – until a chance encounter with hoods in a public place launches him onto YouTube. Word spreads around the community and Kick-Ass’s credibility soars simply through the act of the word spreading – which is a commentary on our Heidi Montag Snooki Omarosa culture: that someone who is inept at something can gain credibility for that selfsame thing for the sole reason of being famous.

When Kick-Ass unwittingly walks into another thug situation he cannot handle, he meets real superheroes. And Hit-Girl saves his ass being kicked yet again by appearing in a blaze of underage glory with her c-words on stun. And steals the movie right out from under the green-clad dorky title character.

I know it’s wrong that my groin aches so badly for her but – *I* didn’t dress her in that cute leatheress outfit with the indigo wig and schoolgirl skirt; I didn’t plant those filthy utterances between her cherrybomb lips. Do her parents know where she is and what script she’s reading? And how it affects the groins of grown men? Really, do you need Howard Stern to tell you this? Hotter than even Natalie Portman in LEON, *I* didn’t write her as the Sexy Assassin; athletic tigress, leg-lopping with quarterstaff blades, full frontal skewering with pig-sticking machetes, point-blank shootings, lethal martial artist – not in any way sanitized for cuddlier viewing.

Sometime in the next seven years, she’s going to make some pedophile a very happy man… Vilify not my informed observation of the Hollywood meat-grinder machine, while there are priests out there grinding altar boy meat without any Hollywood excuse, rationalizing their own deviancy with, “I didn’t ask them to wear those angelic boy-dresses…”

Hit-Girl is backed by her father, another superhero named Big Daddy (Nicolas Cage), who has devoted his life to molding his daughter into the perfect killing machine. Cage was once almost cast as Superman post-Reeve; here he gets to dress as a Batman analog, and though his costume might resemble Bale’s dark knight, his fiendish delivery is most certainly Adam West. In the funniest superhero rendition ever, he seems to be amusing himself alone when he nonchalantly refers to the inept Kick-Ass as Ass-Kick throughout the movie. And when he himself needs to kick ass, he does it in a way that flounces our capes like Christmas…

Now I’m not advocating for or against vigilantism – that’s a whole ‘nother discussion – but if vigilante justice is going to be enforced, THIS is the way it should be done: we see Big Daddy tearing through a warehouse full of thugs in the most violent superhero sequence ever committed to film. We accept this kind of behavior from our “regular” heroes (Schwarzenegger, Willis, Stallone), but somehow onscreen superheroes have been stultified to pander to the supposed kids who read their graphic novels. Not any more, as Big Daddy goes knifing, shooting, exploding, neck-breaking, ramming through assailants like a street fighter with no rules. That faux-Batman visual is dynamite; efficient, clinical, final, we realize this is how the actual Batman should be portrayed in this modern age. Christopher Nolan – let’s step up and embrace the thunder!

Most R-rated movies don’t earn their rating. I’ll say it again: KICK-ASS is not for kids. No bad guys crawl out of crashed vehicles or hold their throbbing heads after a kicking; people actually die here, usually gruesomely. KICK-ASS also shows us consequences of being inept: when Kick-Ass steps out as flamboyant hero for the first time, he gets stabbed, and takes months to recover. The gutless MPAA also stamp their booties when kids are imperiled – here, the very first shot fired is point-blank at the chest of Chloe Moretz by Nic Cage, demonstrating the force of a bullet on her Kevlar vest. (There’s bound to be some idiot on NothingToxic.com who is going to try this – and they’ll blame Judas Priest or Twisted Sister at his funeral.) 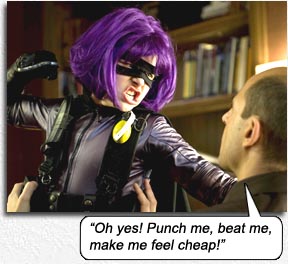 Mark Strong is the villain who runs the city, Christopher Mintz-Plasse his nerdy son who fakes being the superhero Red Mist to draw out the real superheroes. Pudgy Clark Duke is Dave’s geek friend and Lyndsy Fonseca is Kick-Ass’s Lana Lang.

The trailers and the music video (We Are Young by Mika) misrepresent KICK-ASS as a feel-good action-comedy about goodness prevailing against evil, but the movie is dark, vicious and oft-times morbid – to the filmmakers’ credit. At one point Kick-Ass says, “With no power comes no responsibility.” As funny as that sounds, the movie takes a grim turn when his irresponsibility betrays the heroes; when the audience realizes that superhero-ing is truly hard to maintain because villains must match the heroes’ superiority with evil just as extreme; that violence begets violence.

The message which will be largely missed is that simply tying a towel around your neck and swishing about with good intentions does not a superhero make. You have to have the chops to back it up. And the force of will to pursue the violence wherever it may lead, whether that be the death of criminals or the death of loved ones. The dark side of vigilantism laid bare.

Very rarely will you ever see these words issuing from my big-tongued mouth, but I’d love to see a sequel. If for nothing else, to watch my darling Hit-Girl grow into her leather.

With those cherrybomb lips she tells Kick-Ass about the Mayor’s signal for calling on her and Big Daddy – a giant searchlight that he shines in the sky, “It’s in the shape of a giant cock.” Ooooh, God! That runaway rocket just exploded. In my pants.

Behind The Mask.
Superheroes that wear masks always have that black greasepaint around their eyes behind their masks. Right? What the hell IS that? (In the black and white comics of the ’70’s, Batman’s eye-holes were actually WHITE.) I think every comics fan saw the way Hollywood added this kabuki element to the mask idiom and called ‘Foul’ at one stage, or at least, ‘What the hell IS that?’ Do Bruce Wayne and Dick Grayson stop by a mirror and paint their eyes like KISS before donning their masks? Where do they find the time when Two-Face and the Riddler are running wild? We see Big Daddy meticulously doing exactly that, painting around his eyes, in a scene that is hilarious just for its existence in answering all those comics fans who called ‘What the hell IS that?’
Mika ♦ We Are Young