When people make movies this bad, do they attend their premieres? I really wanna know. How do they show their faces? 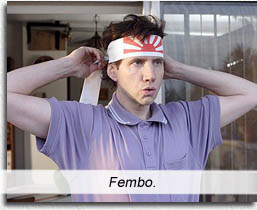 I guess “comedies” like KICKIN IT OLD SCHOOL must appeal to some kind of illiterate unschooled trailer-trash drool-toothed dipsticks, otherwise somebody fellated some major pole to get this greenlighted.

Was it the minimal “draw” of comedians Jamie Kennedy and Bobby Lee (both naturally funny guys, but atrocious in this movie)? Was it the anachronistic breakdancing craze, a proven cash cow in the distant past? Was it that comet that passed near Earth and birthed a two-headed calf?

The fish-out-of-water premise always has potential: Justin (Alexander Calvert), a hot young breakdancer in the 80s, lands on his head and goes into a coma. He wakes 20 years later (retaining his 14-year-old mentality, which explains why he is now Jamie Kennedy) and reunites his breakdancing team from the old days – Miguel A. Núñez Jr., Bobby Lee and Aris Alvarado, losers all, who can’t dance any more, let alone act. They enter a dance comp for some inane reason, but Justin’s agenda is to show his ex-girl (Maria Menounos) he can still kick it, so she will leave her asshole boyfriend (Michael Rosenbaum) for him. It could have worked, had this movie hired an actual director, actual writers and actual actors.

What irks about KICKIN IT OLD SCHOOL is that, like many movies of its lowbrow ilk, stupidity and non-talent is lauded. It is not a bad thing that Our Heroes “win” the day, but that they win without any effort; they win when others are so clearly superior; they win by being the biggest retards on stage – and that is supposedly how you win. No, kids. It’s not. Even this bad movie (and others like it) is not made by people who DON’T know what they’re doing. Yet this movie tells us a competition can be won if you don’t know what you’re doing; it tells us that all those years of practice for the other competitors counts for nothing; it tells us you can be a virtuoso at a craft without going through the rigors of becoming a virtuoso. (Like those bogus exercise-machine ads that claim, “You don’t even break a sweat!” Hey, great! No pain AND gain!) And that’s entirely unacceptable.

The funny thing about this movie (–there’s something funny about this movie?) is that Bobby Lee’s “Domo Arigato Mr. Roboto” bit looks hilarious in the trailers, in the film, like a Chinese burn. So too with the down-wid-it tongue-in-cheek title, all the failed gags, embarrassing plot points and mistimed bits. Nothing works outside of the thirty-second trailer.

What almost became an Olympic sport in the 80s has been marginalized in the 2000s, but the people who still do it, do it extremely well. And that’s the only redeeming factor in this movie – the dancing. Dated though it is stylistically, we appreciate the astounding expertise of the kids who can still jam, break, lock, snap, crackle and pop it.

Unfortunately, expertise is something Jamie Kennedy and his crew of jackasses lack, so we know how it’s going to end – yes, he wins the dance comp, gets the girl, and somewhere, Gene Kelly, Fred Astaire and Gregory Hines are turning in their graves.