KICKING AND SCREAMING is simply a Disney Message waiting to happen. 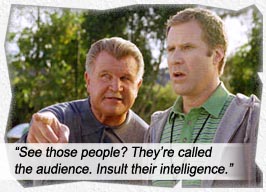 Phil Weston (Will Ferrell) coaches a little league soccer team of shiftless misfits against his super-competitive dad, Buck (Robert Duvall), whose team is top dog. As counter-intuitive as it may seem in pitting Duvall against Ferrell as rival coaches, think how absolutely ludicrous it is to place them side by side as actors. Yet it is not this aspect that drags this movie into the realm of Insufferable.

Due to negatively bombarding Phil with messages that he was never good enough, Buck drives Phil to become obsessed with winning against him. Through the magic of coffee, and a hefty dose of competitive neurosis, Phil turns into a kicking and screaming training dynamo. This, of course, just won’t do with the shiftless misfits, who can just as easily become as good as the top team through a montage. So Phil becomes the Bad Guy – because ambition and drive in a kid’s movie are human aspects as unsavory as sexuality and intelligent parents.

KICKING AND SCREAMING might have survived its death-roll into sub-mediocrity had it not taken its Message so seriously. This Message thing in movies is getting out of hand, each Message delivered from some interchangeable generic Message Script sanctioned by talentless Hollywood executives and sexless Christian fundamentalists; each Message delivered with same tinkling piano (which SOUTH PARK captures so perfectly), same remorseful protagonist made to see the error of his ways by his oh-so-perceptive son; same stand-by-me wife (here played by Kate Walsh doing her emergency Rene Russo) seeing through to the “good man” underneath; with nothing interrupting The Message to diminish its import – no other people entering the frame suddenly or a jet flying overhead or dog barking or rival team heckling – no, The Message is sacrosanct. 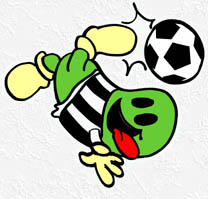 Delivered with the bracing sobriety of a soccer ball to the nuts, we are told – as always, insidiously, through the “stupidity” of Phil rather than through his “intelligence” – that ambition makes you forget your family.Firstly, to be ambitious and driven, you need to forget a lot more than just your family. Winning IS sacrifice. But, the movie argues, we are dealing with a little-league soccer team who just want to have fun. Well, how did they get good enough to win the last match? They didn’t do that by “having fun,” but by the sweat that Phil coaxed out of them during the montage.

And having ambition does not mean you cannot also love your family. Which planet do these small-brained humans come from, where they can only assimilate one emotion at a time? It’s a wonder they can even speak and breathe simultaneously. Once again, paradoxical, sub-human, imbecile values being shoved onto children, under the guise of “family entertainment.”

Director Jesse Dylan could have easily retained the lightheartedness of this Ferrell vehicle if he had not caved to writers Leo Benvenuti and Steve Rudnick dive-bombing the story into some kind of AA meeting “confessional.”

Before his restitutional “Hi, I’m Phil and I’m a coffeeholic” speech, Ferrell shoulders the comedy with his usual spastic grace, ably supported by Duvall, of course. (Hey! It’s Duvall!) Mike Ditka (real life coach of Da Bears), though out of his element (acting and soccer) puts in a first-time performance that is only commendable for the hilarity his non-acting approach brings to it.

And the two young Italian players, Francesco Liotti and Alessandro Ruggiero, add a grand element to the play, stunning the crowd with all those moves reserved for international soccer commercials.

There was stylish camerawork on the field of play, shakily reminiscent of grittier action films, which elevated the movie into a realm it was not comfortable residing in – never fear, as soon as the action moved off the field, the stilted direction and maudlin Message brings it crashing to mediocrity once more.