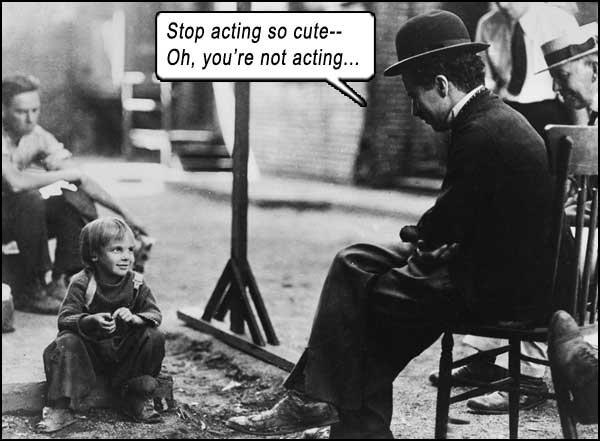 Think of the cutest thing you ever saw: the kitten from that last YouTube video, Kate Beckinsale’s nose, the minions from DESPICABLE ME… now multiply that cuteness by 1000. You get – Jackie Coogan as THE KID.

Charlie Chaplin writes, directs and stars in this brilliant black and white silent movie about a Tramp (his most famous character) who finds an orphan boy and raises him to be a streetwise urchin in the slums of London.

A destitute Mother (Edna Purviance) leaves her newborn in a rich man’s car with a note “Please love and care for this orphan child.” Through a series of misadventures, the infant lands in the arms of The Tramp – who cannot do enough to try and rid himself of it. When he finds he can’t – under the baleful glares of a police flatfoot and various urban denizens – he resigns himself to caring for it…

The Kid (five-year-old Jackie Coogan) and The Tramp work the streets as a team, The Kid smashing people’s windows with rocks and The Tramp innocently appearing as a window repair man to fix the panes for cash.

Meanwhile, The Mother is now a wealthy singer and visits The Tramp’s underprivileged neighborhood frequently doling out care-packets, unknowingly running across The Kid – her Kid – during her rounds. When welfare workers and police snatch The Kid from The Tramp, she discovers the truth and the film rolls to a syrupy ending, after some high action-adventure.

The more you are aware of the “moving pictures” industry just gaining its feet like a newborn giraffe, the more you will marvel at the technical achievements of THE KID; then further marvel at the compelling story structure and tearjerking pathos and dynamic lunacy that Chaplin also inserts over and above his technical prowess.

Front and center – The Kid! Chaplin discovered the jet-cute Jackie Coogan on a vaudeville stage – a fortuitous coup, as the energetic ragamuffin with the floppy cap and baggy overalls simultaneously makes the movie and steals the show. (I love the scene with The Kid’s plate piled high with pancakes; at first he pretends to pour syrup on them and cut them, then he really pours syrup on the edge of his plate and goes to town pounding the syrup down by knifing it into his mouth!)

Interesting note: Coogan would score a role in THE BUSTER KEATON STORY (1957), Keaton, of course, the main contender for Chaplin’s crown as King of Comedy. (Some might contend the battle is still undecided.)

The melodramatic opening title card: “A picture with a smile – and perhaps, a tear.” Chaplin’s signature style would provide the smiles and he shows off his storytelling skills to coax our tears.

It seems to be an erroneous meme that Chaplin’s style is merely kicked-in-the-butt-and-falling-down. But his films are studies in the subtlety of comedy. He actually disliked the kick-butt-fall-down idiom, and “endured” that style with director Mack Sennett at Keystone Studios before he formed his own company. As an auteur, Chaplin wrote, produced, directed, acted in and edited his films (sometimes even composing the score and choreography). And THE KID, his first full-length feature (which became the second-highest grossing film of 1921), boasts startling creativity with various long and wide shots, depth of fields, traveling shots, one of them a fight scene on the back of a moving vehicle (and you thought SPIDER-MAN 2 invented that!); inserts, cutaways, dissolves, mediums, closeups; there are even flying effects in a fantasy dream sequence (in which he is tempted by an underage angel – telling, considering he went after under-agers in real life – the angel played by Lita Grey, one of his future wives!).

THE KID is so well-filmed, so convincingly acted (The Kid turning in a tragic crying scene worthy of Sean Penn and Gary Oldman put together) and so kinetically edited that in all respects it is a MODERN movie, simply without speaking roles. Specifically made NOT to require speaking, letting the visuals do the talking.

Watching Chaplin, we clearly see where Jerry Lewis got his inspiration; a linear throughline from Chaplin to Lewis to Carrey. Like those kings of comedy who would come after him, Chaplin was aware of every inch of his body during performance, knowing where to allot every scrap of energy, knowing what each part was doing at any given second, from his facial muscles to his feet, from his spleen to his unkicked butt.

The characterization is wondrous, considering we have only visuals and a few title cards. It’s the little things that are unnecessary to the plot that reveal just how good a filmmaker Chaplin is: when he first takes the infant home, we don’t realize he does not know the sex of the baby, until a lady asks him, “What’s its name?” and he has to disappear for a few seconds before reappearing to reply, “John”; the pancake-sharing scene; The Kid giving Chaplin his toy dog to kiss; The Kid insisting on saying his prayers at the hostel, while trying to hide from the hostel owner. Chaplin is not just angling for a laugh-a-minute crapfest, he builds the relationship between The Kid and The Tramp so that we feel all their small victories, and cry like lost souls at their rending apart.

And when we think we know the Tramp as a hilarious coward (when he runs from the police or quails from a fight with the neighborhood bully), when the welfare workers forcefully abduct The Kid, he proves his mettle, showing he would go to any lengths for the love of his adopted son: beating off police, a chase across rooftops, a pounce onto a moving car, a fight against the bigger state bullies; by the time The Tramp has reunited with his boy, he is so “big” (as Chief Bromden admires Randall McMurphy to be in ONE FLEW OVER THE CUCKOO’S NEST) that he need only threaten the last welfare worker with his body language and the bigger worker runs off terrified.

It is no secret that elements of THE KID mirror Chaplin’s own life: living in the slums, being torn from his mother, and the tragic fact that Chaplin was casting and working with Coogan immediately after the death of his own baby son, Norman, in 1919.

Nearly a century old, THE KID is still poignant, compelling, desperately cute and literally laugh-out-loud, and will make you wonder how Will Ferrell and Steve Carell have the balls to show their faces in public.

Maybe because The Kid would grow up to be Uncle Fester!