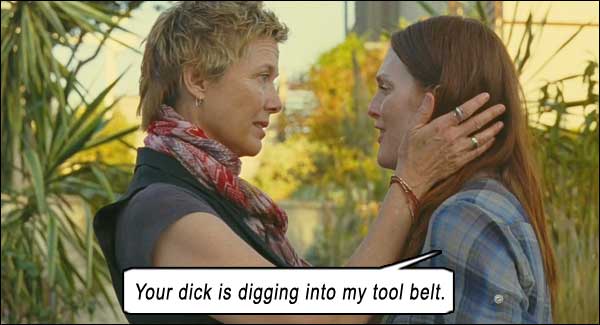 Aren’t all lesbians secretly pining for a good hard one?

THE KIDS ARE ALRIGHT is a new species of homo erectus. It’s a gay-themed movie that doesn’t crow gayness all over its leather chaps; it can afford to be non-offensively mainstream like few other gay-themed movies because its homosexual couple is female – but in going mainstream, it also takes on mainstream traits which it could have done very well without.

The two teenage children of a lesbian couple in 1970s Southern California seek out their sperm donor and bring him into their family dynamic, causing untold High Maintenance freakouts.

Lisa Cholodenko co-writes and directs this brilliantly-acted, well-made movie with the best intentions, but gets lost somewhere between “Lesbians Are People Too” and “Men Are Pigs.”

It is refreshing to see the lesbian couple, Annette Bening and Julianne Moore (Nic and Jules), in a grounded, normal relationship, and not fisting-up for lesbianism, not in battle-cry over LGBT rights, and not in trauma over their community ostracizing them. They have one child each, both from artificial insemination from the same sperm donor. Mia Wasikowska is Nic’s 18-year-old daughter, Joni, and Josh Hutcherson is Jules’s 16-year-old son, Laser. The household is a loving, supportive environment and everyone is quite well-adjusted. Thus in becoming so mundane, the film leans toward advocating for The Nuclear Family. And there’s the paradox:

A gay-matriarchal family, by definition, is NOT a nuclear family (that Post-War family unit defined by its “nucleus” of father, mother and children), but if the sociological and psychological ROLES of father (butch Nic), mother (feminine Jules) and children are being fulfilled, then for all intents and purposes, they are a Nuclear Family. But this movie – by its existence – advocates for a redrawing of family lines. 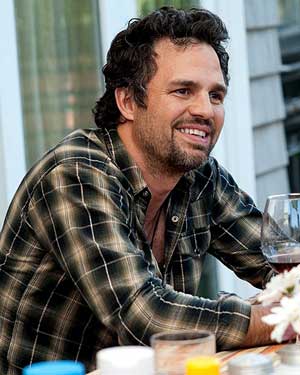 Mark Ruffalo – like every man, used for sperm and then discarded.

Mark Ruffalo is the sperm donor Paul, and he is brought into the mix to – we presume – stir the stew, to shake the foundations of rutted American hubris; to introduce into this Nuclear Family a modern rethink on what constitutes a Family Unit. (Ruffalo has definitely become an under-the-radar Tom Hanks, an all-round charmer, with the added dark sexuality that Hanks never possessed.)

He does shake foundations, creating a male figure for Joni to latch onto, for Laser to look up to, for Nic to resent (as a usurper of her family unit) and to provide Jules (Julianne Moore) with something she obviously desperately craved, that her lesbian lover could never give her – a good hard Ruffalo.

But Ruffalo is simply shaking the foundations of THAT FAMILY UNIT, not the audience’s perceptions. Instead of commandeering a brave new stance on introducing a sperm donor/blood father into the Nuclear Family – no matter the indiscretions and trauma he brings – Cholodenko opts to make Ruffalo seem unbalanced and needy in the third act and by the end, instead of including him in some ambiguous future for the family, he is erased out of the script unceremoniously.

Nic’s last words to him as she slams the door in his face, “If you want a family go out and make one of your own!” Gee, that was kinda “straight” of her…

Which means the conventional Nuclear Family is clung to, in this supposedly revolutionary film, as solidly as in the most blithering romantic comedies and White American sitcoms.

Usually, Julianne Moore’s acting chops and overall presence do nothing for me; but in this film, somehow, I find her performance as Jules exceptional. She shines as a fully rounded character; even the ginger freckles all over her body don’t irritate me.

As Nic starts to take her for granted, Jules turns to Paul for approbation and her comedic affair with him is pitch-perfect, including very raunchy sex scenes, until it starts to intrude on Nic’s concept of the Nuclear Family.

Gay cinema that tries to appeal to wide audiences suffers the same fate as straight cinema that tilts at that same demographic – it usually chickens out and turns to vanilla crap (see POFFY SEZ Back To Brokeback sidebar). THE KIDS ARE ALRIGHT is not crap by any means, but it is also not “brave” like – for example – Woody Allen’s WHATEVER WORKS, where one of the female characters ends up in a three-way relationship with two husbands. And don’t gay women object to the fact that Jules can be turned so easily and passionately to the Ruffalo?

This movie was a perfect opportunity to introduce an option to the close-minded Nuclear Family – adding to the many real life options that are in existence as we speak – but chose to flee like a Republican mortally terrified of Don’t Ask Don’t Tell.

Carter Burwell’s beautiful melodies thread their way through the film. Speaking of music, this film is not to be confused with The Who film of the same name, and I find it slightly insulting that writer-director Lisa Cholodenko would title her movie THE KIDS ARE ALRIGHT without including The Who title song as source music some-frickin-where.

Back to Brokeback.
This seems like a good place to remark on the criticism I receive for not heralding BROKEBACK MOUNTAIN as some kind of landmark; that as a hetero-cumber I must be “uncomfortable” with gayness. Let’s get this, ahem – “straight” – once and for all: BROKEBACK is a good film, but no better or worse than a million American romances. It just happens to be gay-themed, and being gay-themed is not enough for me to term it “brave.” It ultimately DIDN’T allow its gay characters to be together – and that’s what society in general and the Republicans would call an acceptable ending.

What would have been brave is for Ennis and Jack to have found a life together. So I’m not “uncomfortable” with the film cos it’s gay-themed – I deride it because, ironically, it’s NOT doing enough to promote acceptance of gay culture!

It don’t ask and it don’t tell.

Lezzies and Man-Porn.
Laser stumbles on Nic’s and Jules’s gay man-porn tape and in a humorous scene, Jules tries to constructively explain it, while offering profound insight into the lesbian psyche.

JULES: “Well, sweetie, human sexuality is complicated and sometimes desire can be, y’know, counter-intuitive. Um, for example, women’s sexual responsiveness is IN-ternalized; sometimes it’s exciting for us to see responsiveness EX-ternalized, like with a penis…”
LASER: “Wouldn’t you guys rather watch girls doing it, though?”
JULES: “Well, you would think that, but usually in these movies, they hire two straight women to pretend – and the inauthenticity is–” She is cut off by Nic.

Ironic, no? “…usually in these movies, they hire two straight women to pretend…”