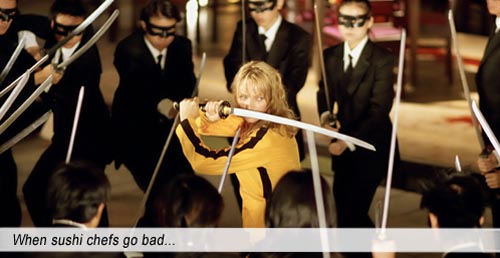 Revenge is a Bumblebee.

Something about Uma Thurman in her yellow and black top-to-toe leather, lopping limbs and severing arteries – how hot is that?!

Tarantino once again defies modern movie convention and structures KILL BILL not in Three Acts but in two whole movies, this VOLUME 1 made up of five chapters of dynamite keg vignettes. And, sticking to his own inimitable convention, each of the Chapters hits the ground running like a reservoir dog.

We are told the KILL BILL epic is “Based on the character of The Bride, created by Q & U.” That would be Quentin and Uma. This was the period in Tarantino’s life when he was infatuated with Thurman, calling her his “muse”; and why wouldn’t he be? Uma possesses that intangible inclination to sometimes look like a man with her big nose and strange lips, yet throughout this rambling saga, she is absolutely beautiful – and my summation of why may not sit with most men; it is because she never tries to be feminine or sexy or alluring – most of the time she is covered in blood, mucus, sweat, grime, snow, water; she is intense, threatening, sarcastic, haughty, baleful, desolate, determined. Never weak. Never dependent. Never “feminine.” So hot. 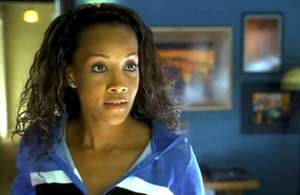 CATFIGHT! Girl on girl violence between Thurman as a vengeful warrior known as The Bride (although her actual character name is purposefully bleeped out) and Vivica A. Fox as Vernita, her opponent from the Deadly Viper Assassination Squad. We do not realize until the end of this sequence why the Chapter is called ‘2.’ Before she drives off, Uma crosses Vernita’s name off a list – it is the second name crossed off. The first name already crossed off is “O-Ren Ishii.” True to non-chrono form, Tarantino has dropped us somewhere in the middle of his movie and half the fun is in putting the jigsaw together while his crazy train is going off the rails.

MASSACRE! A wedding chapel in El Paso, Texas; a heavily-pregnant bride (Thurman) left for dead. Four Years Later, this Bride wakes from a coma in a hospital bed, just in time to stave off another unconscious rape from one of intern Buck’s paying customers. She makes off with Buck’s “Pussy Wagon.” (“You know that I ain’t braggin’ / She’s a real pussy wagon – greased lightning!”… Greased Lightning, from GREASE, 1978.) He won’t need it anymore on accounta her thoughtful crushing of his head in a hospital door.

Though we still do not know exactly what is going on (except that The Bride is out for revenge on the people who “killed” her), Tarantino has an uncanny knack of keeping his films kinetic with his gunslinger direction and eclectic soundtrack. Every element of the film works in concert to create a perception of immediacy, of wanting to be a part of this hip, cool animal; there is narration, there are flashbacks and flash-forwards; there are split frames and crafty reveals; there are Eastern musical motifs overlaid with Western rock, and suddenly–

ANIMÉ! Tarantino dives headlong into Japanese animation! It’s no secret Japanese cinema is a heavy influence on him; in this short cartoon we flashback to O-Ren (the leader of the Japanese mobs, played by Lucy Liu) as a girl, watching her parents massacred at the hands of Yakuza; dynamic, gory, moving, disturbing.

chapter four: the man from okinawa

STEEL! It is here that KILL BILL attains its gravitas. Up to now, it’s been blood and battle and murder, but when The Bride is shown rows of sacred katanas forged by the great samurai-maker, Hattori Hanzo (legendary Sonny Chiba, THE STREET FIGHTER, 1974), Tarantino exposes his beating heart. 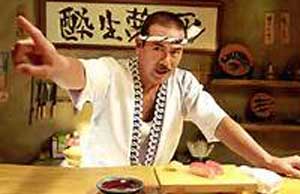 Scene opens in Japan at a slapstick sushi bar, The Bride incognito as a tourist “just learning the language” and Hanzo incognito as a sushi chef exchanging barbs with his assistant. (I love the sound of the Japanese language; the way it launches itself at your sternum with its guttural vocalizations!)

As soon as The Bride says (in fluent Japanese) that she seeks Hattori Hanzo because she has “vermin to kill,” the tone of the scene becomes solemn – not just because of the gravity of killing for principles, but because of the care and emotion put into the instruments of death.

Tarantino gives the Way of the Samurai all the reverence it deserves, as The Bride lovingly picks up a sword in awe, after asking permission; the shine of the steel, the feather weight of the scabbard, the “shink” sound as the katana is unsheathed. Hanzo breaks his vow to make a new sword for The Bride, knowing it is to Kill Bill.

chapter five: showdown at the house of blue leaves

YELLOW AND BLACK ATTACK! The feature piece of KILL BILL VOLUME 1 – the bumblebee demolition of O-Ren’s samurai squad, the Crazy 88s.Bedecked in yellow and black leathers on a motorbike, The Bride roars through Japan’s streets to her rendezvous at the Blue Leaves. Is it coincidence that the trumpet instrumental on the soundtrack emulates Flight of the Bumblebee?

KILL BILL contains so many creative methods of battle that our interest never flags. Every new battle in the movie reveals another facet of fighting – Tarantino never repeats himself. Before the massive samurai slaughter, O-Ren’s teenage bitch bodyguard comes at The Bride with a mace – not the spray, a real mace!

And the Crazy 88s samurai fight choreography stands alongside any Japanese film of the genre. Loving spurting gouts of blood from severed heads, lopped off limbs, carotids bursting like fire hoses; filmstock switching to gritty black and white, then to smooth blue silhouette; slashing, screaming, steel-slaughter–

And then some idiot runs through the air–

I hate wirework! I should qualify that; of course wirework is used for all the sexy leaps and body twirls and flying kicks – I hate *stupid* wirework, that doesn’t follow smooth arcs as denoted by gravity.

The leader of the Crazy 88s, Johnny Mo (Chia Hui Liu), rises on nothingness to a balcony to attack The Bride. For authenticity, it was inevitable Tarantino would use wirework in his samurai film – at least he uses it more as homage, than the basis for the fights.

And Uma Thurman comes into her own as a warrior goddess! Not only because of the bumblebee suit but because she is not a samurai. Yet not for one second do we doubt that she IS.

This movie-as-art closes on a snowscape swordfight; Native American rhythms, a bamboo fountain, a scalping.

Like the cliffhanger films of old, Tarantino leaves us with Bill (David Carradine – heard but not seen) speaking to a limbless victim of The Bride. (The cheeky casting of David Carradine as Bill, the martial arts expert; Carradine of course, making his bones as Caine in the original KUNG FU television series of the 70s.)

The Bride was “killed” at her wedding heavy with child. When she awoke from her coma, the baby was gone. And her revenge quest takes for granted her baby is dead. But KILL BILL VOLUME 1 ends abruptly with Bill asking, “Is she aware her daughter is still alive?”

A Band Apart.
In January 2003, I was performing with a band in Lancaster CA, when rumor spread through the packed, raucous venue that Quentin Tarantino and Uma Thurman were “up near the back somewhere” having just wrapped some shooting in the town. I didn’t believe a word of it, but being the mobile singer, I went slinking around the venue during a song and lo! in the darkmost corner with Uma and a small entourage, chatting effusively (as is his wont), presided the God Of Hip Movies hisself! Quite a cool kick in the nuts to know that Quentin Tarantino once witnessed – and paid no attention to – my shitty cover band.