KILLERS was infinitely more exciting when it was called TRUE LIES. And it was funnier when it was called MR AND MRS SMITH. And didn’t someone just make this movie and call it KNIGHT AND DAY? The old gag about the woman not knowing her husband/ lover/ taut-abbed stranger is a spy. 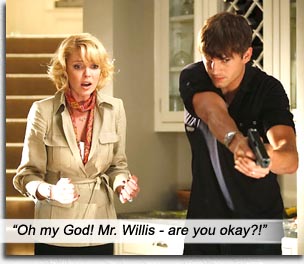 Ashton Kutcher is spy Spencer, who meets American homegirl Jen (Katherine Heigl) in France, on vacation with her doting parents. He falls for her, vows to leave the spy game, and marries her. Back in the States, after three years of marriage in suburbia, his old boss contacts him for one more job. And his wife finds out. All stuttering explanation breaks loose. Car chases, karate fights, gun battles… and nosy neighbors.

Tom Selleck steals the show as Heigl’s disgruntled dad, and brings a mustache so magnificent it threatens to block out the sun, which is ironic, considering Kutcher is body-shaved like a male prostitute. Catherine O’Hara is Heigl’s alcoholic mother, conveying comedic volumes with just a crook of her head or a fiddly gesture. And Heigl is truly such a beautiful woman it seems a shame to waste all that 36D talent in a standing position; we don’t buy for one second that her ex dumped her for being boring.

We never quite feel the romance between Spencer and Jen because their courtship is so far removed from our sensibilities – on the rocky cliffs of Nice, France, in outdoor cafes at magic hour, in 5-star hotel rooms overlooking hardbodied beaches… yeah, exactly how we all met our spouses…

Beginning of second act threatens to bore us to brain aneurysms with married bliss, until Rob Riggle (THE HANGOVER) picks up the pace as a neighbor who tries to assassinate Spencer. With the whole neighborhood suddenly turning into sleeper assassins out to get him, Spencer has to find out who killed his boss (Martin Mull) and who is trying to kill him. While his hyperventilating wife tags along. Discovering she is pregnant ups the ante, but does nothing for the comedy.

It’s mildly intriguing, and blatantly pandering. For example, Spencer tells Jen he “doesn’t like what he does” (that is, he oh-so-hates being such a skilled assassin), because if he relished it, that would make the hero a Bad Person. But if he found The Life so morally reprehensible, why did he do it in the first place? The filmmakers pussyfoot around the MPAA; for the same reason, we never see Spencer actually kill anyone directly.

It’s nice to see Ashton Kutcher’s career back on track – to mediocrity.