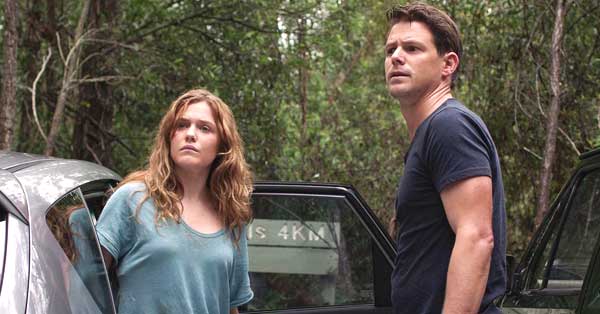 The look that says:
“Rapist killers are pretty bad, but then, you’ve never spent a weekend with her mother.”

KILLING GROUND is killing it.

The MPAA (Motion Picture Association of America) has tainted American storytelling so badly that even in a brilliant movie called UNFORGIVEN (1992), though all the characters do in fact remain unforgiven, yet the lead character finds redemption. So foreign movies, unbound by the juvenile strictures of the contradictory MPAA, are like a cold bucket of water to the face; movies which are allowed to leave their characters truly unforgiven and unredeemed.

KILLING GROUND is an Australian production that dares to leave us bereft of hope. No one redeemed, no one forgiven. It might not boast the amount of sado-horror gore that these types of thrillers are known for (cough-WOLF CREEK), but it retains a darkness that enshrouds the characters at their cores.

Writer-director Damien Power realizes that the junkets and trailers and loglines will give away the genre and premise of his movie – a young couple on vacation in the Aussie bush, terrorized by killers – so smartly decides the best way to be original is to tell his story in a fashion that would still create intrigue and tension, even though we think we know the outcome. As satisfying as his non-linear methodology is, Power ups the stakes by adding emotional bonds between the protagonists that will be tested at an existential level, with the life-and-death trials to come.

Ian Smith (the Australian Mark Wahlberg) is Ian, a young doctor on a New Year’s Eve adventure with his breezy publisher girlfriend Samantha (Harriet Dyer), visiting a secluded campsite he cherished as a kid. After the young couple set up their tent, making “a good team,” as Ian puts it, Sam offhandedly says, “Let’s get married,” in an astounding display of acting prowess: though she’s glowing, we see in her face that hesitant smile that doesn’t know which way to turn, as it braces itself for the worst. Ian says Yes. And the sun comes out in Sam’s real smile! An early warning sign that these two kids are going to bring it, in this tale that takes it all out of them. When Sam can’t get reception to call her sister with the news, Ian jokes, “Consider this your cooling off period then.” Sam: “Nah – this is a done deal.” These kids are totally selling how nice it must be to have a partner look at you that way. However, the film will force us to recall Sam’s decisiveness in its enigmatic final frames…

Across the way, on the otherwise-deserted beach, is another tent, seemingly uninhabited, for the night and day Ian and Sam are present. Without warning, we are witness to another young family – father (Julian Garner), mother (Maya Stange), teen daughter Em (Tiarnie Coupland) and toddler Ollie. They’re at that other campsite. Director Power treats us as sophisticated enough to realize he is showing us another time-frame. This is obviously before Ian and Sam got here. Em is stridently being a teen, poo-pooing her dad’s taste in Simon & Garfunkel, living on her cellphone, vetoing a walk to the far-off waterfall with her parents, and staying behind at camp. When she gets spooked by being alone, she takes a hike to the family car and falls asleep inside. (All we know is, she’s got better reception than Sam; if only they’d met, so Sam could’ve asked her Australia’s million-dollar coverage question: Telstra or Optus?…)

A third throughline is introduced – two working class blokes who look like trouble: German (stoic Aaron Pedersen) and Chook (a creepy Aaron Glenane). (Not only does Pedersen look like the Australian Tommy Chong, it’s heartening to see an Aboriginal actor in a co-leading role that commands the screen with such easy dominance, not looking like stunt casting or someone out of their milieu of “tribal elder” or other such racist shit. Voted Bachelor of the Year 1994 by Cleo Magazine, his alpha maleness is definitely on display here!) They have some tenuous, sinister connection to the campsite, but it will take us a few more non-linear cuts to make that link. Right now, they’re trying to pick up some barely-legal shielas at the local watering hole. Something in their conversation earlier makes it clear they aren’t averse to rape…

KILLING GROUND, one of the best proponents of The Australian Film Industry, is another example that fortifies my argument against Stephen King’s saw, “It is the tale, not he who tells it,” as I’ve always maintained that a mundane tale could be made compelling by the one who tells it. Thus correcting the axiom to, “It is not the tale, but he who tells it.” 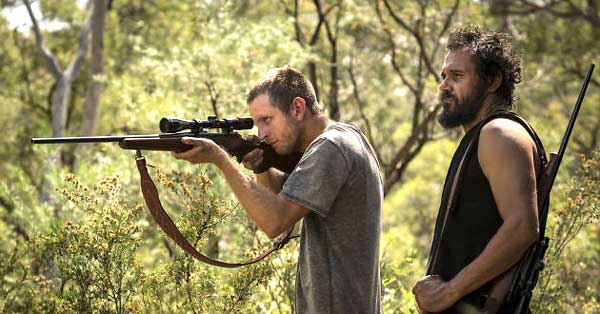 Sam realizes something is horribly wrong when she discovers the other tent is disheveled inside… We see that other couple taking a walk to the falls with toddler in backpack… Chook, with a glint of lust in his eye, finds Em in the car, sleeping… Ian needs to change his flat tyre so they can summon a ranger to look into the disheveled tent; when Sam is bringing their bags to Ian’s car, the camera is angled to see a toddler following her from another path; the toddler falls, Sam doesn’t notice (but we notice the beautiful framing! And the story coming together…).

The most touching moment in this harsh thriller is Em’s mother, seeing Em being manhandled, and simply body-slamming into the assailant. No whining of “Please don’t hurt her!” No waiting for a strategic opening – just SLAM! – like a mother grizzly protecting her brood! That brought a tear.

Movie will continue to defy our expectations with the actions of Ian (who may look like Wahlberg, but decidedly doesn’t act like a Hollywood Hero); the psychosis of German and Chook towards the family; the twisting fate of the toddler; Sam’s defiant and powerful spirit (manifested in her brilliant performance); and the fact that even when the movie seems to have nothing left in its tank except Chase Movie, it will still find the pistons to drive us white-knuckled to its final frames.