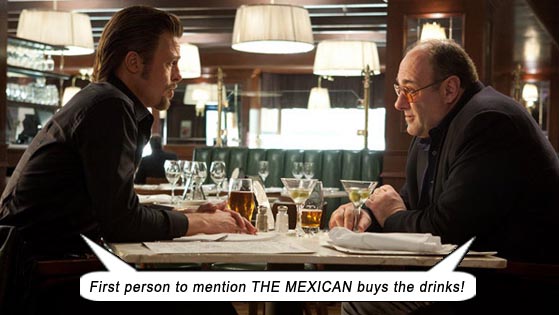 The Capitalism of Killing.

KILLING THEM SOFTLY opens with scarring sound design and disturbing images of debris-strewn streets, and then launches into the poetry of small time hood-speak. (Mobalogue? Gangsternacular?) Writer-director Andrew Dominik (ASSASSINATION OF JESSE JAMES, 2007) approaches an excellence in his writing and direction that is the closest thing to Tarantino without actually lazily copying him, as this movie about Mob-related crime features no woozy car chases or interminable shoot-em-ups, but large meaty chunks of beautiful, sinister, foreboding dialogue and sudden, distressing violence.

Somewhere in the dankest, dirtiest climes of New Orleans, after three local hoods rob a Mob-protected card game and crash the underworld economy, hitman Jackie Cogan (Brad Pitt) is brought in by the Mob attorney (Richard Jenkins) to “restore order” to the burg.

Set in the days leading to Election 2008 (with the American economy crashing due to W, with Obama’s platitudes and Bush’s lies filtering from every radio and TV, with news reports about AIG and other such True Crime ambience), KILLING THEM SOFTLY is analogous to the macro world of seedy capitalism; all crime is ultimately an economic endeavor, as many economic endeavors are ultimately crimes. In a way, Street Crime can’t keep up – because the politicians and bankers who own countries’ monies and debts are much bigger criminals and murderers than small-time thugs could ever hope to be. 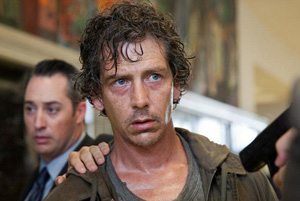 The opening scenes are surprising for their grabbing power, as two lowlife street hoods are given a job by Squirrel (Vincent Curatola – Johnny Sack from THE SOPRANOS, grown as stout as Tony Soprano). The hoods are Frankie (Scoot McNairy – in ARGO he never got such meaty screentime, or to be this filthy) and Russell (Ben Mendelsohn), a sweaty low-class Australian, whose idea of a life plan is to steal and sell purebred dogs, amass $7000 and then buy heroin and become a dealer.

The Job: knock over a Mob card game run by Markie (Ray Liotta) who once knocked over his own card game, was never found out, and who then owned up to it after the heat was off. Everybody laughed back then “’cause people liked Markie.” But they wouldn’t laugh a second time – and Markie would be whacked as the obvious suspect, leaving Squirrel, Frankie and Russell free of suspicion. 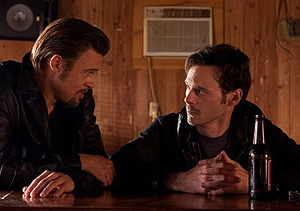 “No, really, how do you get that dirty?”

With the compelling dialogue and foreboding sequences, we don’t even care that Pitt doesn’t appear in the first act! We wanna see what happens to these three mutts.

Pitt’s Jackie is a smooth operator. He believes in “killing them softly” – from afar, where there’s no chance of getting emotional with the mark. He opines, “The country is fucked. There’s a plague coming!” The reason? Not because of all the killings and crime and such – but because the Mob are now squeamish about murder, and hesitate on giving him the OK to do his job efficiently! What’s the world coming to, if The Mob won’t murder people?! There are many instances of this black comedy wrapped within the sinister dialogue surrounding it.

When Jackie shoots his first mark, it is a ballet of super-slomo, of bullets exiting barrels, of glass shattering, of blood flowering sensually in the air behind an exit wound. It is glittering art. 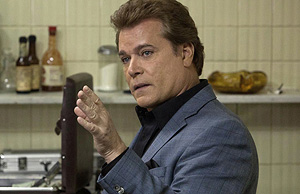 And when the closeup violence comes, we are reminded of Scorcese as well as Tarantino; vicious, brutal, real. Ray Liotta’s beating is disturbing for its veracity; reminiscent of the True Violence portrayed in THE SOPRANOS (cases in point: Mustang Sally beaten with a golf club; the hooker beaten by Joe Pantoliano).

New York Mickey (James Gandolfini) is called in to help Jackie. Here he comes in slow motion toward the camera – the late, great Gando! An expensive hitman (yet in this economy, accepting less pay), now past his prime, drinking, whoring and paranoia that will not end well for him. “You want ass? There’s no ass in the whole world like a young Jewish girl who’s hooking.”

KILLING THEM SOFTLY is a work of art, controlled, sincere and brutal. Dominik’s stark visuals are perfectly complemented by the ominous soundtrack, such unique aural dalliances, it is not even called soundtrack, rather credited as “Piano pieces and musical ambiences by Marc Streitenfeld.”

While they watch Obama’s election victory speech, Jackie gives a final clenched-teeth monologue about the hypocrisy of Thomas Jefferson and the shallowness of the new president Obama, which is stunning for its incisiveness. Now let me qualify: I’m no Obama-Hater, and I’m sure Brad Pitt himself doesn’t suffer Obama Derangement Syndrome, but his character’s tirade highlights the hollowness of any president’s words, no matter how soaring the speech:

“Don’t make me laugh! ‘We’re one people’! It’s a myth created by Thomas Jefferson… an American saint because he wrote the words “All men are created equal.” Words he clearly didn’t believe since he allowed his own children to live in slavery. He was a rich wine snob who was sick of paying taxes to the Brits. So yeah, he wrote some lovely words and aroused the rabble and they went out and died for those words, while he sat back and drank his wine and fucked his slave girl. This guy [Obama] wants to tell me we’re living in a community? Don’t make me laugh! I’m living in America, and in America, you’re on your own. America’s not a country. It’s just a business. Now fuckin’ pay me!”