Four gifted scientists travel to the planet Nova in a technologically advanced spaceship and discover a prehistoric world, coming face to face with a Tyrannosaurus rex… Nah, actually four ignorant doofuses, the Teen Models of their day, travel to an imaginary planet that the excitable narrator makes up on the spot, in a child’s idea of a pointy spaceship, and discover Iowa (replete with normal wildlife like birds, trees and bears), coming face to face with a forced-perspective iguana that they squint real hard and pretend is a Tyrannosaurus rex. 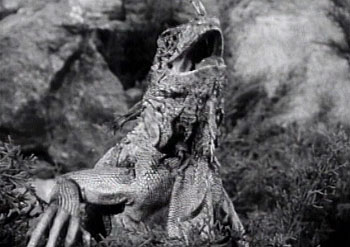 The massive, majestic Tyrannosaurus rex towers over the–
aah! Who are we trying to fool?…

Writer-director Bert I. Gordon starts his inauspicious career with the glaringly inept science fiction adventure KING DINOSAUR. He would go on to become a legend of dopey filmmaking, his efforts featured regularly on MYSTERY SCIENCE THEATER 3000 (as this movie was).

His actors are as inept as he is, each boy-girl pairing looking and behaving exactly like astronaut scientists on an interstellar voyage: wearing safari suits and long modest dresses, female hair and lipstick perfectly coiffed for a night club; landing on a planet rife with plant and animal life, yet not stopping to even marvel at it, let alone take one jot of notes to report back to Earth. The women scream and are treated like dames; the men puff out their chests and behave like Frank Sinatra toward dames. Real astronauts, these doofs.

Their names are inconsequential; the men would remain TV actors for their careers, the women would just give up acting (no doubt, after being “discovered” by some randy producer sugardaddy).

Immediately after landing on Nova and spending five minutes in fishbowl helmets and puffy suits that feature no life-support systems – off with the helmets. Because they study the atmosphere and find it breathable. You don’t need to land on a planet to study its atmosphere, doofuses (or is that ‘doofii’?); it can be done from Earth with spectroscopic analysis and a hundred other methods.

They build a lean-to with logs and leaves– waitaminute! Millions of miles to Nova, with food, air, guns (guns!), analytical equipment, an atom bomb (–an atom bomb?)… and no tents.

On a “mysterious” island that they must row to – for padding purposes – they discover the special effect stylings of Iguanosaurus rex, which battles an alligator/caiman to the death – and I mean, real death. The filmmakers just let these animals tear each other to pieces.

Last straw comes when the man and woman are trapped in a cave with the Iguanosaur trying to poke its head in, and the man scientist takes a picture of the beast (on a camera the size of a small car). As he’s marveling at the picture, telling us explicitly “It resembles the Tyrannosaurus rex, from Earth’s prehistoric age” (failing to mention, you need to have glaucoma to squint that hard to make it resemble a T-rex), the hysterical woman scientist snatches it out of his hands and rips it to shreds, screaming, “Oh, who cares?! No one’s ever gonna believe us anyway!” Uh, not without evidence at least, which you just destroyed, you dumb c-word! Real scientists, these dames. 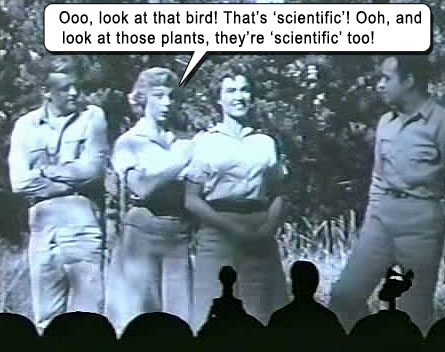 Wait, there’s another last straw: when the four escape the island, they nuke it. Yeah, to escape animals that are doing nothing wrong, merely following instincts in trying to eat these “scientists” (which would be right on so many levels), these doofii plant an atomic bomb and Oppenheimer everything to dust. Then they look upon their wanton slaughter and try for some kind of incognizant irony: “We sure have done it: brought civilization to planet Nova.” And I shudder to think – considering the tone of the opening narration, lauding the magnificence of Mankind’s technology and bravado – that the doofs are not being ironic, but rather, referring to themselves as homo superior in destroying a “lesser” planet. A sly nod that technology can be destructive, but in the end, it saved our pasty asses from those lesser-evolved creatures.

Speaking of lesser-evolved creatures, let’s have a group shot of you doofs and Bert I. Gordon all looking in a mirror…