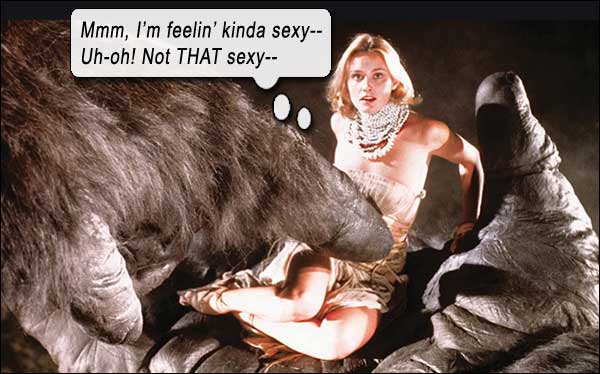 In any Ape Movie, the quality of the movie is entirely dependent on the Ape Effects: the original KING KONG (1933) was a revolution in stop-motion special effects; MIGHTY JOE YOUNG (1949) continued that legacy; 1968’s PLANET OF THE APES boasted state-of-the-art creature makeup coupled with attentive simian performances; GREYSTOKE (1984) pushed the limits of performance and makeup with Tarzan’s ape cousins; Peter Jackson’s 2005 KONG remake was a stunner on seamless effects…. But in 1976, producer Dino de Laurentiis decided to go Godzilla on us by putting a guy in a gorilla suit…

Dja ever notice the ape extras in PLANET OF THE APES – those background chimps with the masks just placed loosely over their heads? Even they looked better than Dino’s King Kong.

Directed by John Guillermin, the original Kong story is re-written limply for no reason by Lorenzo Semple Jr.; starring Jeff Bridges as a primate biologist (hairier than the eponymous ape star), Jessica Lange (playing the bimbo starlet as if constantly on the brink of orgasm) and a guy in an ape suit walking around like a guy in an ape suit.

The saddest irony is that the guy in the ape suit is none other than Rick Baker, renowned makeup artist – the maestro actually responsible for the innovative ape characters in GREYSTOKE! (This was early in his career, at a point when he had only done makeup effects for a handful of films, two of which were featured on MYSTERY SCIENCE THEATER 3000, which should indicate their “quality.”) To lower the bar even more, this movie actually won an Oscar for its “visual effects” – Special Achievement Award (read “special” as in Olympics).

Charles Grodin plays the entrepreneur who kidnaps the giant ape Kong from his jungle island and brings him to America to advertise his oil company. Kong escapes. Cue Running-and-Screaming. In what is unintentionally the funniest scene, when Kong escapes, Grodin runs towards the ape and then lies on the ground screaming, with his arm warding off the camera zoom for a full ten seconds before Kong steps on him. Gotta love bad editing.

In this version – where all the characters have been re-wrought for no special reason (well, maybe for that “Special Olympics” reason), Kong doesn’t climb the Empire State but the World Trade Center buildings. Instead of biplanes, fighter jets shoot him down.

Though it is reprehensible, KING KONG 1976 is still not as egregious as KING KONG LIVES (1986) – an actual sequel to this movie, where Linda Hamilton discovers Kong has lived after falling 110 storeys and gives him a giant bionic heart transplant, whereupon Kong escapes with his chick (another giant gorilla) and goes walking around the jungle like a guy in an ape suit.