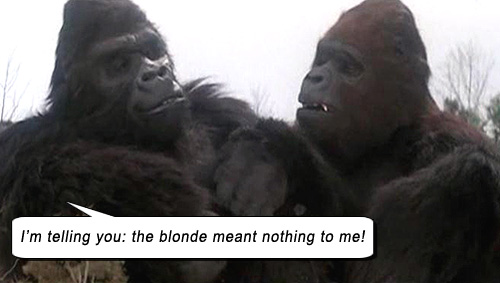 Emboldened, we presume, by the cult status of the GODZILLA franchise, the De Laurentiis Entertainment Group suits up an American actor in an ape suit for KING KONG LIVES, a direct sequel to KING KONG 1976.

And all apeshit breaks loose.

KING KONG LIVES opens with the last scenes of KONG ’76, as Kong climbs the World Trade Center building, is shot, falls, and lies dying on the street, as Jeff Bridges and Jessica Lange scream.

Cut to ten years later, where Kong is being kept alive in an Atlanta lab by Dr. Amy Franklin (Linda Hamilton, leading a uniformly strange-looking cast, which might account for her looking oddly attractive with that feathered hair and those massive uncouth man-lips). A giant bionic heart awaits Kong, but they can’t transplant until they find a blood donor, which is as easy as typing in the script: CUE LADY KONG.

Another giant gorilla – a female! – is found by an Indiana Jones-type explorer (if Indiana Jones was a pansy). Ruggedly blond TV actor Brian Kerwin plays Hank Mitchell, who reminds us of Aaron Eckhart (if Aaron Eckhart was playing Indiana Jones as a pansy). We’re presuming he requested his agent find him a role that would destroy his film career. (His agent succeeded.) The female ape is just as enamored of Mitchell as Kong was with Darrow. What is it with giant apes and blonde bitches?

In goes the artificial heart, out goes Kong, to rescue his ape-chick and take off into the jungle, Eddie Murphy’s sidekick on his tail. Seems the army is just following John Ashton (Taggart in BEVERLY HILLS COP) because he’s the “nigger with a badge” shouting the loudest. As cigar-chomping trope Colonel Nevitt, he goes after Kong with a vengeance born of no motivation. Later when Nevitt is killed, his last order was to annihilate both the apes that were causing him such agita – but after his death, the army grunts just stand around blankly and watch the ape family bond. “Uuuh, what was that last thing Eddie Murphy’s sidekick told us?…”

That’s not the only instance of pathetic staging: there’s the guard standing at Kong’s feet watching him escape while doing Lou Costello; there’s Kong (Peter Elliott) rescuing Lady Kong (George Antoni) while random scenes play out with no continuity – a car smashes into a tractor, a guy falls from a roof, a car flips over; and the scene that epitomizes the laziness of the production – when hillbillies lure Kong into a canyon and cause a rockslide with explosives to bury him, one would think there’d be a 50-foot high mound of stones, but no, end result is: Kong is buried in a 50-foot deep hole with only his head exposed. Was it budget or lack of brains that thought up this scene? 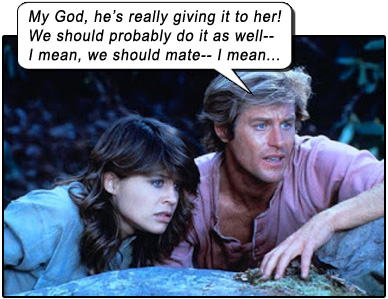 Glad to see Linda Hamilton did her hair and applied extra heavy mascara to intercept Kong with her heart monitor – a monitor that plays no part at all in the story. Maybe she just wanted to look good for faux-Eckhart, who gets to share her sleeping bag with minimal cultivating effort.

She crows over the apes, “Some animals mate for life.” What is it with women and mating for life? First of all, you’re a scientist! You know that’s an exception to Nature’s rule, not an aspiration that will benefit species survival; second, how does ‘mating for life’ even register on your list of tasks to help Kong survive? And finally – they’re the only two giant apes in existence – what other choice do they have?!

Director John Guillermin (TOWERING INFERNO, KING KONG 1976) and writers Steven Pressfield (his first screenplay) and Ronald Shusett (ALIEN) do try hard to inject real poignancy into the ape scenes, and the final scene’s intent is commendable. But the execution is laughable: Lady Kong gets pregnant and gives birth (within a coupla weeks apparently) to a bouncing baby… uh, man-in-an-ape-suit. The “baby” is so tiny that it fits into Kong’s palm – like a human! (How then did Lady Kong get so fat?)

Kong’s tears were not for the fact that he would never see his baby grow into a rampaging king, but that his woman had obviously done it with faux-Eckhart to birth such a stunted mewling monster!

Dying is easy. Keeping your woman from running around with other species is hard.