King Kong versus King Of The Monsters in a battle to the meh!

It’s Halloween. One of your idiot friends is in an ape costume walking around upright like a human, not making the slightest attempt to emulate an ape, and another idiot friend is dressed as an alligator and his long tail has knocked over the snacks table more than once. Then the ape guy makes a move on the alligator guy’s date, and now they’re girl-slapping each other in the backyard… no, hang on, it’s actually KING KONG VS. GODZILLA. I just couldn’t tell the difference… 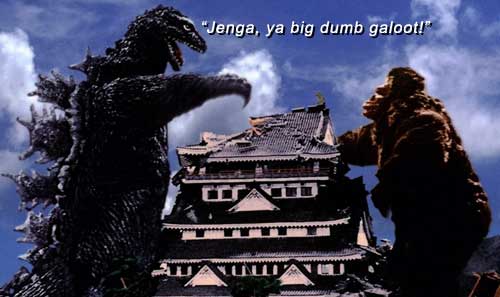 Maybe in its day KING KONG VS. GODZILLA was the Ali-Frazier of giant creature battles, but now it’s the Batley Townswomen’s Guild reenactment of the battle of Pearl Harbor. Why are the fights filmed in “real time”? The filmmakers already know that applying imperceptible slomo to these supposedly giant creatures would make them look… big. They apply heavy slomo to the creatures when they destroy bridges and temples, but when they hand-to-hand, the real-time brings home that it’s just two guys in rubber suits girl-slapping.

Movie opens with Shakespeare: “There are more things in heaven and earth, Horatio, Than are dreamt of in your philosophy.” (Hamlet 1.5.167-8.) Am I in the wrong movie? No, just in the “American Version.” All the segments of a clean-cut American chap giving news reports in this foreign language called English and speaking to a “scientist” about Godzilla are pure bunk, inserted sideways into this dumb movie to make it even dumber.

It’s a pity that director Ishiro Honda who co-wrote/directed the classic GOJIRA 1954 was involved in so many of its inferior sequels, and it’s not all his fault! As indicated above, American production companies would have a field day mangling his work, rewriting, re-editing and filming outright new sequences to supposedly accommodate U.S. vernacular and tastes. That kind of behavior was accepted back then (as the original GOJIRA was raped and turned into GODZILLA, KING OF THE MONSTERS for U.S. consumption), but today we see it as the insulting racism it truly is.

Godzilla breaks out of an iceberg, and Whitey Brylcreem says, “The world is stunned to learn that prehistoric creatures still exist!” then immediately follows with, “Godzilla is heading southeast toward Japan–” Hang on! – you’ve skipped over one million questions we have about the existence of prehistoric creatures, to naming one of them a proper noun, not even a Species or Phylum classification?! How did you arrive at that name for a creature you just discovered? Give us some description! Give us some context! Why are you calling it “Godzilla” with a familiarity like you dated it in high school? What kind of newsman are you? A prehistoric Neanderthal?

Speaking of dated: the filmmakers feel the need to cutaway to a fake “satellite” in “space” every time anyone throws to a reporter in another country, to ensure we understand that’s how the communication is getting there instantaneously. What would they think of twitter?

As any casual Godzilla observer will note, canon is completely ignored in this movie – or at least, ignored by the American version. Why? Because as everyone knows, Godzilla was created by the radiation fallout from Hiroshima and Nagasaki. Oops… Which soulless prick of a country wants to take blame for those murders? Not America! What weapons of mass destruction? Who, us? Only other countries have weapons of mass destruction – not us! Hence – “prehistoric” (not mutated by our bomb), and “just discovered” (not already rampaged through Tokyo in a much better movie that poked its finger into our red white and blue chest).

Canon is also flung like poo out of a monkey cage where King Kong is concerned. He is sought by the Japanese Groucho Marx, the Japanese Don Knotts and the Japanese Abbott and Costello, to ward off Godzilla (who is – let’s face it – the Japanese King Kong!), though how they plan to make Kong their ally and direct his energies toward a creature he would ideally avoid unless his life was threatened is a mystery. What’s not a mystery is where Kong lives – not on “mysterious Skull Island,” but in the Solomons, near the north of Australia. Australia?! So that’s why Kong knows how to wrestle big lizards – he’s seen CROCODILE DUNDEE!

Instead of a giant door on Kong’s island, the natives have erected a spindly latticework to keep their simian god off their part of the island. I’m sure they’re sick of fixing that giant door every time Kong breaks it to come through whenever he damn well pleases. The lead native woman is, of course, the one with the biggest set of coconuts.

Kong is kept docile by the South Pacific islanders with a berry drink, that we discover he is addicted to, not just by wiping himself unconscious with it, but by the fact he will risk his life fighting a giant octopus that gets even one tentacle near it. Gotta admit, that giant ‘pus attack is pretty cool – it’s a stop-motion sequence, Harryhausen-style, and the best standout scene in the movie. (By the way, was I implying only Americans are racist? The “natives” on Kong Island are Japanese people in blackface! When everyone is racist, no one is racist!)

We can’t fault the American producers for every stupidity – the scene with the dynamite plunger onboard the boat pulling Kong’s raft is beyond witless: Abbott and Costello try to keep Groucho from accidentally leaning on the plunger, which is right in the middle of the deck, connected to Kong’s raft, just waiting to be tripped over, with not one guard around it.

battle of the tits – I mean, titans! 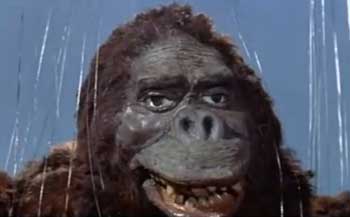 East meets West in a battle that doesn’t make one lick of sense. Forget the non-motivations of both these animals, even as a kid, I pondered how they could possibly be the same size – Godzilla, even at his smallest, was 164 feet tall; Kong was 50 feet high. That’s why their canon was rewritten. Now they’re both exactly stupid feet tall.

Did that guy in the ape suit (Shôichi Hirose) take one look at how simians behave? But then, after learning of all the problems of the first Godzilla suit, can he be fully blamed? The suit didn’t accommodate much more movement than flinging poo – and look at that scary/dopey headpiece!

First question to Godzilla (Haruo Nakajima and Katsumi Tezuka): how about going for that fire first? Why does he constantly breathe fire in front of Kong instead of directly onto him?

Idiot in a helicopter filming the battle, constantly putting the camera down to shout stupid things, “Kong, grab his tail!” “He’s roasting Kong!” Yeah, how about some video footage of that, instead of your thigh.

We can’t fault the filmmakers for the “effects” – it was the best their budgets and resourcefulness could buy – but the story, motivations and reactions of actors are unconscionably juvenile. Written by Shin’ichi Sekizawa (channeling a 10-year-old), we learn that Godzilla is repulsed by electricity and Kong is made stronger by it (who said that was okay?); as with all giant creature movies, civilians butt into central command and tell generals what to do – and generals comply; “The United Nations has placed heavy weapons and armed divisions around Hokkaido” which do nothing to Godzilla, but they do the logical thing once they realize missiles slide off him like buttah – they keep firing. It’s not just the writing – it’s the audio: to distract Kong, our Japanese hero beats on some congas – and even the dubbing on his drumming doesn’t match his hands!

It’s quite bizarre how even the Japanese are all rooting for Kong as if he’s some kind of altruistic savior. Given half a chance, he’ll run rampage exactly like his reptilian counterpart, as indicated when he picks up a woman and climbs a building that looks like the Empire State – we figure for old times’ sake. It’d be a miracle to find even one Japanese person these days that would root for Kong over Godzilla, their national treasure. (This was when Godzilla was still regarded as a loose cannon, rather than “friend of children.” Oouaah!) Doubly strange when we know this movie was made under the auspices of the GODZILLA franchise, not the KING KONG franchise.

I can only liken the GODZILLA franchise to the 1968 PLANET OF THE APES franchise, where the first movie was a stunner, every successive sequel driving nails into the legacy’s coffin. With Godzilla though, it didn’t destroy the property but created an alternate perception of the monster that was never intended. In this way, it can be likened to the BATMAN franchise where Burton tried hard to make the franchise dark and in Schumacher’s hands, it turned into fruit salad.

And if this gorilla-zilla fracas isn’t fruit salad, I don’t know what is.