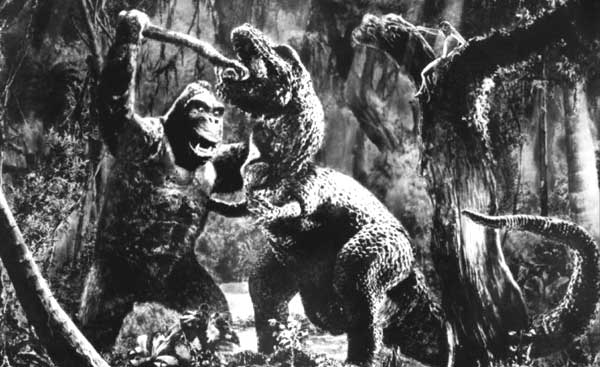 The tyrannosaur feels the wrath of the blonde-whipped ape.

The King Is Dead! Long Live The King!

Unleashed on an unsuspecting Depression-era American public when “talkies” were not yet five years old, with old Masters like Chaplin still releasing silent films and heroes like Gary Cooper, Spencer Tracy and John Wayne youthfully laying the groundwork of movie-stardom with “realistic” films, KING KONG – the film itself, like its eponymous ape – became the Eighth Wonder of the World. 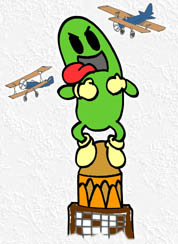 In its day, a 10-Cukee movie, no quibbling, no rock-paper-scissors needed to determine its pioneering, bombastic, brain-withering primacy. Unfortunately, instead of aging like a fine wine, it has aged like a Big Mac.

Unless you’re under 20 or over 120, we all grew up revering this film as a mythical emblem of our past innocence. Watching it today, even though we clearly see fingerprints all over Kong as his plasticine body is re-shaped every second, we can still shudder at that old black magic created by stop-motion pioneer Willis O’Brien (long before his protégé Ray Harryhausen took the reins), but we must steel ourselves to cringe in embarrassment when bad actress Fay Wray (as bad actress Ann Darrow) lights up the screen with her dim bulb; when Robert Armstrong (as director Carl Denham) swishes about in theatrical, melodramatic overcheese; when Bruce Cabot (as Jack Driscoll), being accused by Denham of being a “hard-boiled egg getting a look at a pretty face and going sappy” effeminately puts his hand on his hip (wearing a pair of pants high enough on his chest to be considered cool by a generation now in senior diapers), and challenges, “Now who’s goin’ sappy?”

With modern eyes, we see Merian C. Cooper‘s and Ernest B. Schoedsack‘s slam-bang 1933 juggernaut as the above-average B-Movie it always was.

As loathe as I am to finally admit it, KING KONG is unwatchable (except for its cute little stop-motion segments, and they, only for academic value). If it weren’t for KONG being a pioneering film from the birthing stages of cinema, innovative in its day to the point of genius, it would score much, much lower in my vegetable patch.

“Acting” has progressed to levels undreamt of by the melodramatic stage actors populating KONG; social mores have allowed more realistic portrayals of male-female interaction onscreen, and filmic sophistication in general has risen far above the groundling stage of the four writers of KONG (Merian Cooper, Edgar Wallace, James Ashmore Creelman and Ruth Rose) who penned a screenstory neglecting to give their characters plausible motivation and realistic actions. 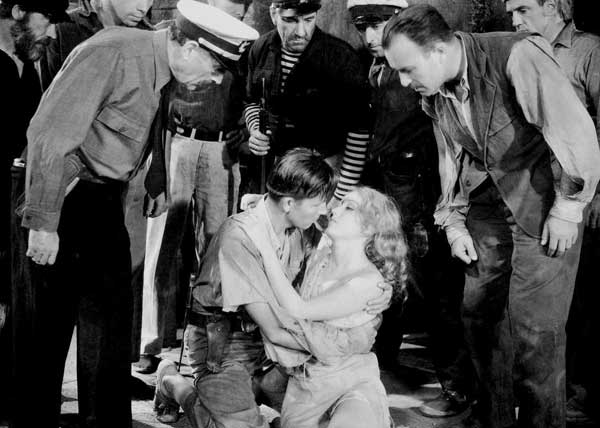 A movie-making party headed by Denham somehow sail to the mysterious Skull Island on a studio set, which doesn’t resemble a boat so much as a rock-solid piece of carpentry (ignore the fact that Denham’s hired boat captain (Frank Reicher) exhibits not one jot of concern for steaming his barge into uncharted waters); to find the natives merely loin-clothed African-American extras from Central Casting (ignore the fact they’ve built a giant wall to keep a monster at bay – yet with a giant door big enough for it to get through. And not taking into account it’s an APE who can climb large structures, to whit, the Empire State Building).

Captain Mild-Mannered runs translation on the Natives (saying “bala” just a little too frequently), but even with the strange dialect, we fully apprehend he speaks without prepositions; exactly the way White America spoke to Native Americans in old cowboy movies, exactly the way the Asian cook complained onboard ship, “Someday me go back China, never see no more potato.” Thank you, Whitey Dialogue Coach.

When the natives kidnap Ann as sacrifice to their giant ape-god Kong, the movie simultaneously launches into Adventure Genius and Stupidity Central. (We ignore that Kong risks his life battling a tyrannosaur for a smidgeon of blonde flesh he picked up no more than ten minutes ago. We also ignore the herbivorous sauropod chasing humans and eating them – while roaring like an ocelot! – with the frenetic, headache-inducing score trumpeting along like a breakneck keystone cop. On the flip side of the cacophony, KING KONG was the first movie to ever boast a score especially composed for it.)

We try to ignore, but are force-fed, the primitive attitudes of Shoot First, Don’t Bother Asking Questions Later. The first animal Denham’s party encounters behind the prehistoric wall – a stegosaurus – is perfunctorily shot dead without hesitation, after which Denham actually laments, “If only we could bring back one of these things alive…” Well, the first step, White Hunter, is to NOT shoot it! 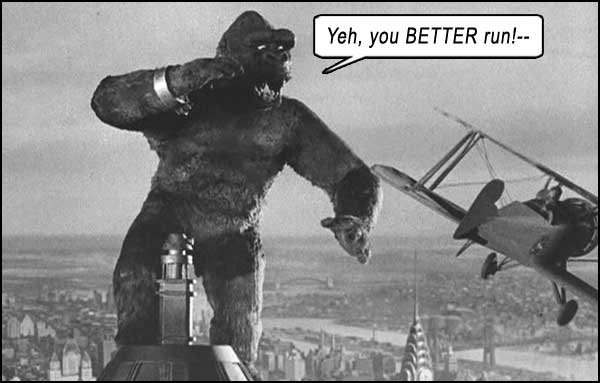 And ultimately, we ignore that the foremost thematic element, alluded to incessantly by Denham – the vaunted “Beauty and Beast” imbroglio – is entirely non-existent. Oh, there’s the Beast all right, whose unrequited infatuation with Darrow stinks of 1930s anthropocentrism, rather than any instinctual or paternal legitimacy (i.e. humans are so damn important that a blonde one will get the juices of any species flowing) – and there’s Darrow, whose interaction with the Beast consists of irritating, mind-numbing screaming and grand theatrical gestures relegated to B-Movie creature features, not exhibiting one whit of compassion towards her ape captor. But Fay Wray is in this script not for any romantic “Beauty and Beast” dichotomy, rather by Studio Decree – that every movie monster have a female captive, to give man-heroes purpose to chase the monsters, and to arouse what passed for prurient interest in those bygone days, when female knees were masturbation fantasies. Ignore – and continue enjoying the movie…

Finally, after Kong’s hydraulic hand picks Ann out of her apartment (where Driscoll valiantly battles the hand while Ann uses the opportunity to lie motionless on the bed and scream like the retard we grow to suspect she is), we ignore the fact that climbing to the top of the Empire State Building, and remaining there after discovering it is a dead end, is strategically asinine for an instinctual animal. Ann, meanwhile, seems more than happy to see her “beloved” Beast gunned down, after which Denham snidely misplaces the blame and, lying to himself – and the movie audience – laments “it was Beauty killed the Beast.” Considering that Kong is part of nature’s beauty and that the beastly Denham heartlessly dragged the ape to beastly civilization for exploitation, I’d say “it was Beast killed Beauty.”

How about them bananas?!

Ratings Anomaly.
Derogation smears the page, yet this movie scores 7 Cukees?! Yes, when measured against today’s tech and acting prowess, KONG’s performances stink, the story is full of plot holes and the racism and bigotry are appalling, yet we modernaires can never fully appreciate or realize the extent of this movie’s innovation during this birthing period of American moving pictures.

I apply this highly scientific cucumber-rating to this movie solely on how the filmmakers brought their ape star to life and wove him into human interaction in an age when such effects and such concepts were unthinkable. Also, they were sincere in trying to convey the tragic story, and failed not through lack of effort, but lack of filmic sophistication – again, victims of their era, so no foul. Even with their failure, we still weep when the innocent Kong falls from the Empire State. If Denham had not opened his anthropocentric big mouth for that final warped line, the film might have retained more emotional impact (for this little cucumber at least).