Jesus: The Man, The Myth, The Model.

KING OF KINGS is the definitive Catholic document: not really religious, not really holy, not really accurate. Just the way Catholics like it. This movie did for Jesus what Richard Burton did for Roman accents.

Being raised in a Catholic household and inculcated to believe that my every living act should be aimed at securing a throw-pillow at the Savior’s feet for my invisible, future self, KINGS was foisted upon me every Easter. Back then, that was Parental Control. Being unaware of any other methods of madness, I ate it up like communion wafers and sacramental wine. (It mattered not that eating the metaphorical Body and Blood of Christ originated in cannibalism – what young Catholics didn’t know wouldn’t hurt them; not like older Catholics would hurt them were they to defy superstitious Catholic ritual.) 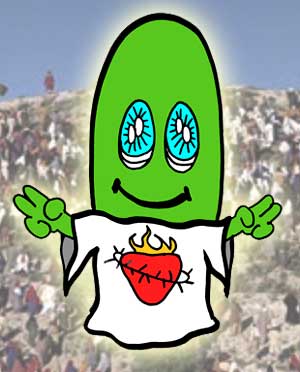 Now I know better. Jesus was so popular because he was a looker.

Vindicating the hard-won fantasies of generations of Catholics who, against all evidence to the contrary, forcefully promulgated the visage of a blue-eyed savior who spoke American, director Nicholas Ray casts a fragile gay supermodel as Messiah – to Catholics, Jeffrey Hunter IS Jesus. You’d be hard pressed to convince them otherwise. The shrew-brained capacity of Catholics was personified in my own father. I will never forget his outrage as he blared unheeded at some long-forgotten TV movie which portrayed a decidedly Lebanese, hook-nosed, jerry-curled Jesus: “That’s not what Jesus looked like!” In most Catholic households, one need only cast one’s gaze to the framed portrait abiding over the living room, to see what Jesus really looked like: painfully Caucasian; long, glossy Cindy Crawford tresses and Fabio cheekbones; perfectly trimmed beard; with heart on outside of body, surrounded by crown of thorns and light blue eyes which followed you everywhere.

For Jeffrey Hunter, it’s good to be the King of Kings.

It would be easy to disparage this movie as a fantasy – but then, every movie is a fantasy (yes, even those Inspired By True Events). And as Monty Python once said, “You can’t really make fun of Jesus,” because he only said and did commendable things and delivered a message of social harmony that people who came after him are still trying to figure out by killing each other in His holy name. But – as Python concluded – “you can make fun of everything else around him.” Therefore, though the Message of this movie is attuned to human survival – through the altruistic teachings of that honey, Jeffrey Hunter – the silliness is in the fact that a demonstrably insane fantasy had to be erected around these teachings to impart their message (from a virgin birth, to a white Jesus, to reanimated corpses), and ultimately burdening the possibly-historical Jesus figure with the mantle of divine Messiah (but he’s not the Messiah – he’s a very naughty boy). 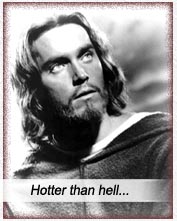 Ray somehow flenses every iota of action from the film, choral embellishments through every turgid vignette insistently reminding us that we should be in awe, or at least kneeling before Zod. Robert Ryan epitomizes this lack of action with his torpid John the Baptist, probably kicking himself when Charlton Heston injected his Baptist with sheer epic cheesedom in George Stevens’ THE GREATEST STORY EVER TOLD, 1965. (But then, who could ever beat out Heston for sheer epic cheesedom?)

To retain the film’s family thrust, nothing outlandishly graphic is portrayed; even with Jesus’s torturing and flaying, as with any superhot model, nothing seems all that tragic when his hair still looks that good. And with his ‘pits shaved for maximum boy-band effect, he even makes crucifixion look kinda sexy.

Habitually prudish adults and censors suddenly lose all sense of discretion around Jesus movies, allowing their kids (nay, forcing them) to watch what should be considered despicable, obscene, R-rated acts (thorns forced down on a man’s head; nailing living flesh to a crossbeam); claiming that children could learn from the bigotry displayed by the Romans and Pharisees in persecuting a man for his beliefs – conveniently sublimating the fact that it is this same bigotry on their part which has pummeled the image of a white Jesus into dreamboat dogma.

The Romans are to Jesus movies what the Russians are to Bond movies – a shorthand for “evil incarnate.” Which should be ironic to Catholics, as their full title is Roman Catholics (due to Constantine I legalizing Christianity in Rome in 313 A.D.). Christians – and Catholics especially – seem to forget that their particular denomination did not exist during Jesus’s actual time on Earth. It was the Israelites and Jews – portrayed as always in constant prayer, unequivocally repentant for whatever insecurities they fed their children to keep them downtrodden – being terrorized by those Evil Romans with their manly Sensible Sandals and sensuous nippled breastplates. Modern Christians ally themselves with the downtrodden peoples onscreen, never considering the non-stop wars they have waged on those very peoples, for the exact same reason as the Romans – challenging their Messiah’s divinity!

There is a whole subplot involving Barabbas the New Yorker (Harry Guardino, who just can’t shake that Big Apple stanque) and Judas (Rip Torn), amassing troops and storming temples – from a section of the Bible no one can seem to find.

Due to every religion preaching life after death (that most moronic of oxymorons), screenwriter Philip Yordan need not even preface Jesus’s “resurrection” with any exposition. Before we know it, the choir is in full swing and Jesus is back to meandering, now with whiter whites.

There’s a word for people who come back from the dead: zombies.

But Jesus can’t be a zombie – not with those soft-filter lenses and choral rejoicing; not with those light eyes and high cheekbones… No one in the film seems particularly horrified that their friend may have come back to life, and are too ready to proclaim him “risen” rather than “reanimated.” The “grave-robbing” option is given short shrift, which speaks volumes about their Denial Factor and also explains how they deluded themselves into seeing Jesus amongst them after his death. Nowadays, telling outright lies via the media is euphemistically called spin. Back then, it was euphemistically called gospel.

In his book, Two Masters, One Message (1978), indoctrinated Christian Roy C. Amore compares Jesus Christ and Gautama Buddha, struggling to be objective about the Christian theology he knows has been “borrowed” from Buddhist theology (which was established in Northern India five hundred years before Christianity started in Palestine).

Amore’s sobriety breaks down when he describes “miracles” of the two men: “From time to time nature bends her rules a bit for the sake of the masters.” Into this “scholarly” account of two major figureheads, kindergarten magic is irrationally invoked with nary a ripple in the high-browed attitude! Amore possesses titles like Associate Professor of Religious Studies (University of Windsor, Canada), B.A. (Drew University), Ph.D (Columbia University); he is an editor to numerous publications – yet can get away with purveying ignorance in the espousal of magic because he knows that the majority of publishers, editors and readers are also indoctrinated with this insanity!

Movies can unquestioningly portray something as outlandish as a zombie in Western idiom because people like Roy C. Amore abound – “scholars” who corroborate Christian idiocy via unverifiable “doctrine.” Why does nature never bend her rules for great leaders who have access to worldwide media? Why couldn’t Mahatma Gandhi cure lepers? Why couldn’t Martin Luther King Jr. reanimate drive-by victims? What is the reason God is refusing to bring harmony to the Middle East? (I’m sure he has told George W. Bush in one of their many chats.)

“I’m amazed that men like you can be so shallow, thick and slow…”
— Jesus, JESUS CHRIST SUPERSTAR.

Author Harlan Ellison outlines five literary character types known throughout the world, “free-floating universal images” dogging humanity’s consciousness: Tarzan, Superman, Mickey Mouse, Robin Hood and Sherlock Holmes. The concept of Jesus – whether he was man or god – was the Superman “type” long before Jerry Siegel and Joe Shuster put Kal-El in cape and tights. (And yet, Jesus’s robes do suffice for a cape – the symbol of authority, of smooth-flowing power – and the once-immodest wrap that graven image-makers wrought on the crucified Christ has over the years come to resemble the Superhero Panty.) For this reason – not because he was the Son of God – Jesus will never die; if we are really lucky, his messages of social harmony will one day be understood. Not by Catholics or Christians though – if they have not apprehended the messages after 2000 years, it’s obvious they never will. Maybe some more killing in His holy name might help.

Ultimately, media like KING OF KINGS is dangerous, because people use religious zeal as if the word “religious” did not apply; from what I can tell, ‘spreading the word of Jesus’ means bombarding us with injunctions that we’re going to burn in hell if we don’t kneel before Zod, ‘tolerance’ means forcing your views down everyone else’s throat, and ‘loving your enemy’ means only if he agrees with you. And when all else fails, see chapter on Killing in His Holy Name.

That’s why these same bigots cannot see the selfishness and hypocrisy inherent in the concept of scoring points on Earth for the sole reason of attaining that throw-pillow at the anointed feet of Jeffrey Hunter.