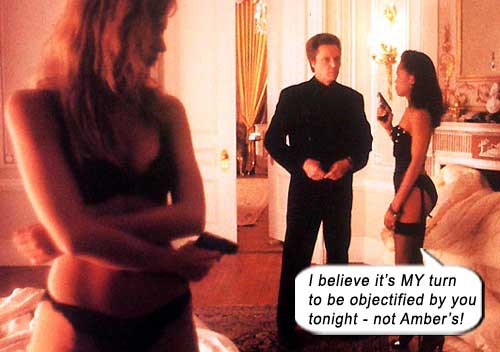 SCARFACE Lite, for those watching their gangster waistline.

Christopher Walken is the KING OF NEW YORK. And in the movie of the same name, Walken is Frank White, a stylin’ drug overlord just outa jail, who reclaims his Manhattan territories by murdering every other would-be or wannabe dealer who moved in on his turf during his incarceration.

Frank uses a black street gang to gain total control of the streets, and seems to genuinely want a renewal of said streets, wiping out pimps who force 13-year-old girls into hooking, dealers who sell drugs at insane markups – and here’s the twist: he wants to fund children’s hospitals and other community causes. And he wants to become Mayor.

So we’ve had it wrong all these years. That old saw about all politicians being criminals is backwards – all criminals are politicians.

KING OF NEW YORK is one of those films you desperately want to love, and we can see it’s trying hard to be loved. The slogan is “Where SCARFACE left off, KING OF NEW YORK begins.” Not really. Not at all. It’s trying to look tough, but there is absolutely no reason for its X-rating. Walken eats the prime role as a ruthless gangster; tits, ass, guns, blondes, drugs, brutal murders – but its shoddy writing and staging is not helped when Laurence Fishburne opens his street-unwise mouth, or David Caruso tries to act.

It’s a modern Robin Hood tale – written like a 15-year-old boy. A shallow gun-for-gun, death-for-death tale, which only revolves around these protagonists and the cops who love to nail them. Abel Ferrara’s direction is adequate for a crime actioner, but Nicholas St. John’s writing makes us squint real hard to see the plot, through the idiotic police caricatures, black gangs who act like white people think black gangs act, and Christopher Walken schmoozing through the proceedings as if he is in a better movie than this really is. The more I think about the predictably simplistic script, the more I’m sure St. John is 15 years old.

Victor Argo is a police captain who hounds Frank, for what we don’t know (Frank’s just done his jail time, right? – and the murders he is now committing are not linked to him via any evidence whatsoever); maybe the captain is mad that Frank has such a long history of arrests, which he gazes at disdainfully on a “computer” (a fat cathode ray screen with futuristic green writing on a black background). David Caruso and Wesley Snipes are supposedly streetwise detectives, an ambiguously bromantic buddy-cop duo who keep failing at busting Frank through proper channels so resort to just trying to shoot him for no reason (hey, exactly like real cops!).

Frank’s gang are led by Giancarlo Esposito and Laurence Fishburne (who proves he’s a white guy by trying to act like a black guy). Steve Buscemi, on Frank’s gang, is so young he looks almost human. Very sexy Janet Julian has nothing to do in a role as one of Frank’s attorneys, except show some nip and be his unconvincing girlfriend. And a plethora of bims in various stages of undress keep the 15-year-old writer happy.

Only a 15-year-old would imagine a coke party being so naively prudish; only a 15-year-old would write a scene where a cop gets shot at a funeral attended by 500 cops, and the shooter escapes by driving away real fast while the cops watch helplessly; only a 15-year-old could possibly imagine a police captain imploring a gangster’s lawyer to stop representing the gangster, so that justice could be done. (The captain drops a gruesome picture of a murdered kingpin on the lunch table of Frank’s lawyer at a fancy restaurant. Like the lawyer gives a fuck… You lost me at cops being cut up over the deaths of drug kingpins. And doesn’t the U.S. constitution guarantee any suspect the right to an attorney? Does the captain not know what he is mouthing when he recites Miranda?)

David Caruso overacts an impassioned speech with so many contradictions, it should be a college course on cognitive dissonance. “My job is to protect the people of this city.” Protect them from whom? Gangster Frank? Who kills only other – in your parlance – scumbags? He’s not indiscriminately walking into a bank or a 7-11 and shooting innocent bystanders. “Every time Frank kills someone else out there, it’s our fault.” Once again, we have yet to see Frank kill – directly or indirectly – innocent bystanders. Or are you giving yourself a left-handed self-congratulation; that every time Frank kills another drug kingpin, you get the credit? Being a policeman, you should know your job does not entail interjecting into the upper echelon of crime, which overlaps your governing bodies that pay your salary. What’s eating at you Caruso, besides a bad script?

So Wesley and Caruso, embittered that no one takes their man-love seriously, and that the courts are not incarcerating Frank for no reason other than because they say so, decide to go on a vigilante shoot-em-up against Frank. Laurence Fishburne they’re just going to kill on principle for his wickedly inept gangbanger impersonation. Without any thought to the liability of their actions, the safety of the populace – or that thing he said just ten minutes ago about protecting the people – Caruso and Snipes careen into a mindless, bullet-riddled car chase, shooting at Frank’s car, ramming it, crashing into other vehicles, all the while endangering countless innocent bystanders and both Caruso’s and Snipes’s egregiously ’90’s hairstyles.

Walken accosts the police captain in his home to try to explain nicely, “You think ambushing me in some night club is gonna stop what makes people take drugs? This country spends 100 billion dollars a year to get high! That’s not because of me. I’m not your problem! I’m just a businessman.” But the captain will never see that. Either he doesn’t understand the truth of his pay grade (i.e. steer clear of drug overlords), or he’s been written by a 15-year-old boy.

Never has obsession come across as so puerile, as the captain goes after Frank alone, with only one handgun, no vest, and the power of Christ compelling him. What’s he going to do: shoot down Frank for breaking and entering? What kind of unthinking vendetta has that 15-year-old gotten us into?

Final scene is a lesson in unthinking screenwriting, as cops appear out of nowhere at a place they couldn’t possibly have known Frank was going to be, and in a blaze of what-just-happened, the film peters out.

Walken will forever be Walken, Larry Fishburne would become Morpheus, and Wesley Snipes would rule the 90s with his black-jitsu. David Caruso is still trying to look tough with that hair.