My Kingdom for a (war)horse…

If LIONS FOR LAMBS was the cerebral, intelligent take on the Iraq War, THE KINGDOM is the action-packed, piss-your-pants rejoinder – both written by Matthew Michael Carnahan (who should probably be investigated by the CIA for all the inside information he brings to these military stories). 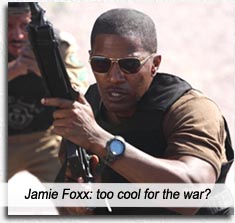 Peter Berg starred in LIONS as a strong, sure military hand; in KINGDOM, he directs with same. Shot in Abu Dhabi and Arizona, despite appearances, THE KINGDOM is not an anti-war tirade, more like CSI: SAUDI, as four American military personnel defy paperwork and fly into Riyadh, Saudi Arabia to investigate a bomb attack on an American civilian base.

KINGDOM opens with a grand historical overview of the Saudi Arabian Kingdom, giving us far-removed First-Worlders much-needed background as to why Middle Easterners are so stridently pissed at American involvement in their holy/lucrative land.

From this expansive scope, the story suddenly narrows to the provincial point of view of the four Americans (big surprise!) who must navigate their own American bureaucracy and Saudi cultural politics to get to the bottom of the bombing mystery.

Jamie Foxx leads the Amurrican cowboy charge, Chris Cooper riding shotgun; with Jason Bateman completely miscast but milking every minute of his role as bureaucrat fluff; Jennifer Garner, the token military female who imagines she has a dick.

Their Arab police liaison is Colonel Faris (Ashraf Barhom), a more natural actor than the trained Americans and probably the most likeable character for it.

After the bombing, American audiences are treated to scenes of Arab-on-Arab torture. An Arab policeman at the American base (a friend of Faris) is tortured by an Arab security agency. Though this policeman decisively killed some drive-by terrorists after the bombing, the security agency feels the sting of its own failure in protecting the American base and takes out its frustrations on the Arab policeman, accusing him of being one of the terrorists – on the evidence of a sweaty shirt.

As we’re heading home, suddenly, Jason Bateman is kidnapped by Saudis. The movie might have elevated its intensity at this point had the Saudis decapitated or de-limbed Bateman, as they do to every prisoner without thought – if the prisoner is Arab. But because it’s Jason Bateman, well… we can’t kill the whiteboy when there’s a perfectly healthy Arab character (Faris) whom American audiences won’t identify with, but who we’ve set up as a sympathetic, intelligent, principled family man who hates torture and wants peace in his country blah blah – now he gets to be Crew Member #5 in STAR TREK who beams down to a planet with the principal cast, wearing a different color tittie-shirt – and we KNOW what happens to those guys…