When sex is the weapon of choice.

His exotic masculinity tapped different chords, promising the danger and excitement of all that was uncommon.
–Rock Brynner, writing of father Yul in the biography, “Yul: The Man Who Would Be King.”

Yul Brynner’s entertainer uncle gave the young gypsy one piece of laconic advice: “When you play for a crowd, lead with your cock.”

In KINGS OF THE SUN, that’s all we can see: Yul Brynner’s cock.

Young Mayan king Balam (George Chakiris, from WEST SIDE STORY, looking like he’s just come from the set of WEST SIDE STORY) flees with his people across the flat-Earth sea (the Gulf of Mexico) from Mayan barbarians, disembarking in a fresh, unspoiled North American land. They immediately begin spoiling it with their huts and pyramids and montage of village life, while the Elmer Bernstein soundtrack tries to beat us over the head. (Bernstein comes fresh from composing one of THE most compelling pieces of cinema music ever – THE MAGNIFICENT SEVEN, here reprising himself with a kind of MAYAN-IFICENT SEVEN flourish that doesn’t quite work.)

Balam’s first act as King of the New World is to publicly announce his betrothal to Ixchel (Shirley Anne Field), who immediately humiliates him by refusing his proposal. He takes it quite calmly for a king of a civilization that routinely cuts out human hearts for sport. No retribution, no repercussion, this white woman with the aquiline nose, sky-blue eyes and slightly rubbed with red body-dye is allowed to go about her business carrying stones for the pyramid and doing other montage-y things without the King grabbing her and taking her roughly from behind like a Real Man from the Mayan Era. Like a pouting diva, she tells the priest later she wants to be wooed by the King, like a sensitive 1980’s man, “If he is lonely, why doesn’t he tell me himself?” Uh, probably because it’s 2,000 B.C. and the effeteness of Dr. Phil wasn’t invented yet?

Brynner is Chief Black Eagle of the tribe Just Over The Hill, who appears like a jungle cat as Balam is making plans to dam his river. In blazing body oil, Black Eagle bests Balam, but is set upon by Balam’s girlymen, and taken captive to be offered as a human sacrifice to the river gods, so that the dam will work and the water will flow to the village. Richard Baseheart is Balam’s priest who offers this sagely wisdom, and he must be right because he dresses like an old woman and speaks in a Shakespearean accent.

By this point, you will notice that KINGS OF THE SUN is one of those movies that gets everything wrong – historically, physically, culturally, linguistically – with such intrinsic racism no one even thinks it’s racism. The cast swish about theatrically and speak English like butlers, the filmmakers adopting that age-old indecency of rubbing red dye on all the whiteys’ skin and hoping we squint real hard to pretend they’re Bignoses.

The only person perfectly cast is Yul. With his gypsy blood and panther’s mien, he is not only visually period-perfect, he is pure sex, a feral, exotic beast; with that ambiguous ethnic background and crazy continental tongue, his bronzed body ripped like a Quetzalcoatl wolf-child, he oozes authentic Plains Indian and/or Mayan warrior as much as everyone else cancels it out. No wonder he did the whole movie shirtless. To distract us from the bad dye job on the whiteys when they stand next to the real Mexican extras.

Black Eagle is injured and tied in a hut, where Ixchel tends his wounds, while following Rule No.7 in the Filmmaker’s Handbook: “When tending men’s wounds, women must do it like they’re having sex with them.” Even near death, Black Eagle is majestic, and Ixchel spends a few too many minutes tending to his raging nipples. He is Zeus Reborn, he is Prometheus Unbound, he is… the King of Siam. And he demands his freedom. And obeisance. And Ixchel. Et cetera, et cetera, et cetera…

Of course, Ixchel is drawn to Black Eagle’s marauding manliness, as her only other choice is the wimp who allowed her to demean him publicly. Black Eagle blatantly asks her to marry him, which makes her consider whether she should continue cock-teasing the wimp or just jump this panther’s Mongol pole, like she wanted to do the moment he was dragged, snarling and shirtless, into the gates of the city…

Viewed out of context, I would not blame anyone in thinking that KINGS OF THE SUN is an early Yul Brynner vehicle that introduced his musk to the masses – but it’s actually  three movies after the one that shot Yul to megastardom – THE MAGNIFICENT SEVEN (1960)! (To say nothing of the other two 1956 films that ramped him into stardom and superstardom respectively: THE TEN COMMANDMENTS and THE KING AND I.) 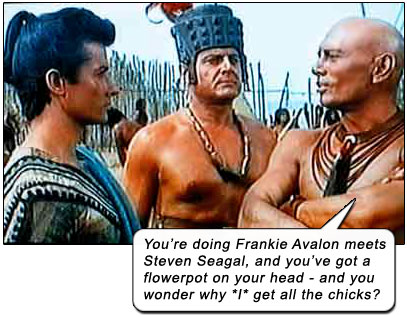 And there’s big ole Brad Dexter (the least MAGNIFICENT of the SEVEN) walking around with his gut sucked in and red dye on his shirtless body. He’s Balam’s aide who wants to put Yul to death for making him look like such a patsy in THE MAGNIFICENT SEVEN.

At the chopping block, Black Eagle staves off his own death by reasoning with Balam, and Balam – unlike other religious fanatics – actually listening! The Priest whines they need this human sacrifice for their crops to flourish, and Black Eagle, unbowed, in his Stentorian thunder replies, “Look at this land where we have lived for centuries: the grass grows, the trees spread their branches, the rivers flow. And we have not spilled one drop of blood in sacrifice to the gods.” Proof. And Balam sets Black Eagle free! As he strides tall out of the village, his definitive butt cheeks causing immaculate conceptions, every woman drools, “I hate to see you go – but I love to watch you leave!”

Balam’s Mayans and Black Eagle’s plains Indians join in an uneasy truce, learning from each other. Yes, the bullshit flows strong and proud as the history of both these fantastically superstitious peoples is cast out in favor of some kind of moral lesson in rationality. But the truce cannot last long, as both men come to blows over the affections of the white woman.

Is it just me, or do Balam and Ixchel get whiter and whiter as the movie wears on? Guess they were either running out of red dye or the women responsible for rubbing that shit into everyone were gawping at Yul and not paying attention to what they shoulda been doing.

Suddenly – WAR – with the Mayan barbarians that chased Balam’s tribe out of South America. They’ve braved the flat-Earth sea and found Balam’s tribe! (Whoa-oh, Black Betty – Bam-Balam!) And oh, such touching man-love as Black Eagle’s tribe joins forces with Balam’s girlymen to rout the invaders in an overlong battle that looks suspiciously like The Batley Townswomen’s Guild Reenactment of the Battle of Pearl Harbor.

KINGS OF THE SUN is ambitious in one way, in that it tries to recreate a point in history when the Mayans learned NOT to sacrifice. It fails in its epic sweep because, uh, well, the Mayans never did learn not to sacrifice. APOCALYPTO this ain’t; Mel Gibson’s masterwork depicting the downfall of a civilization due to its fanatic self-immolation.

Bam-Balam consolidates all three tribes in the end, as he gives a rousing speech atop the pyramid that I’m sure no one past the third row could hear, “We don’t need a human sacrifice – the gods are satisfied with the sacrifices that each of us make in their day-to-day lives.” Wow, that’s pretty 1980’s sensitive male. Balam echoes Black Eagle’s words in the end, and it’s no wonder Ixchel embraces him like she’s almost turned on by his Ohio Whiteboy stanque; he’s learned from the best, to lead with his cock: “The grass grows, the trees spread their branches, the rivers flow…”

Revising Revisionism.
Astounding that these idiotic Hollywood-ized movies were not termed “revisionist,” as they totally revised reality. (How hard did you laugh at King Balam’s Elvis pompadour? Oh, I get it – he had an Elvis ‘do cos he was The King!) Yet why is APOCALYPTO “revisionist” in sincerely trying to depict actual Mayan culture?

The cowboys-and-indians movies of early Hollywood were also literally “revising” the Real West, yet they were never referred to as “revisionist” even though they pooped all over America’s frontier legacy. Decades later, the films that were honestly clawing back to a gritty realism (DANCES WITH WOLVES, UNFORGIVEN, LAST OF THE MOHICANS) would erroneously earn the “revisionist” nomenclature.

Ironically – how revisionist is that?

Tenuous Link
Kings Of The Sun ♦ “Drop The Gun”

…an Aussie band who lead with their cocks…