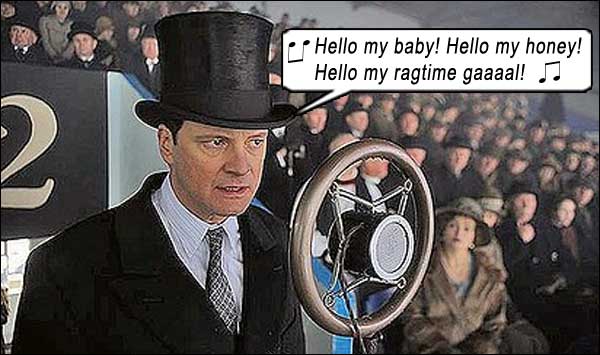 A Royale with cheese.

So the British Royals are ordained by God, eh? God moving in yet another mysterious way by “blessing” King George VI with a chronic stammer… Ergo, no God – or God’s an asshole.

THE KING’S SPEECH is a fascinating insight into a non-publicized corner of English Royal history, revealing a sordid truth deeper than the question of whether the Royals ever go to the toilet: King George VI (1895-1952) had a speech therapist! And a Commoner at that! A fact guarded as preciously as any illicit state secret, because during the waning years of the Royals being taken seriously (circa WWII), God and Country forbad the Royals ever admit they were less than perfect. That would be like admitting they go to the toilet.

Colin Firth (the British Tim Robbins) is Prince Albert of York, later to assume the title King George VI. Geoffrey Rush at his most avuncular is the Australian-born speech therapist Lionel Logue, practicing in London, whom Prince Albert turns to, at first for his speech defect and later (so the movie portrays) as a confidant and for psychological support. Helena Bonham-Carter is perfectly cast as The Royal Wife (although she is overshadowed by the bromantic resonance of the two male leads, so is relegated to prop status; a fine performance of course, but nothing that an actor of her stature could not phone in). 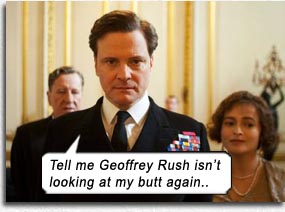 THE KING’S SPEECH artfully weaves in another sordid episode in British Royal history: I remember as a child seeing a documentary about the king who abdicated his throne to marry a commoner. This movie’s subplot is about that king – Guy Pearce is King Edward VII, older brother to Albert (not averse to mean-spiritedly mocking Albert’s stammer) who thrusts Albert onto the unwanted throne by abdicating for the love of trim.

In a type of Freudian methodology, Logue relates Albert’s stammer to psychological trauma from his youth; a “talking therapy,” coupled with physical exercises (which we presume are more for goofy 30-second trailers than utility), gradually becoming such a crutch for the future king (to the chagrin of Mother Church), that George VI could not make his grand speech without Logue in the isolation booth also, coaching him through his hard consonants and soft syllables face to face.

Compliments to the filmmakers for avoiding the bleating orchestra swell during the king’s grand speech, rather, a majestic Beethoven soundtrack (from Symphony No.7 to the Emperor Concerto) underscores the fact that the king – even in this moment of triumph – has not attained some kind of elocution epiphany, but must keep hammering at his impediment with Lionel’s help.

The searing talent of the two leading men will make you weep. Such nuance and control, such an innate understanding of humanity. Firth does an awe-inspiring mimicry job (mimicking a stammerer, yet absorbing the chest-hitching difficulty of speech as if he was born with it). The mark of a great actor is how he “acts badly” – Rush performs a Shakespeare audition like a community theater beginner, dropping in and out of his badly rendered stage character with such believability we wonder how he ever won that Oscar for SHINE.

THE KING’S SPEECH is truly revisionist, showing us scenes that would have been cause for beheading during the golden years of the Royals’ reign: we see how that famous picture of King George supposedly giving his speech from his desk was a setup – the actual broadcast room was draped in hideous curtains, soundproofed like your first garage music studio; after the speech, the king makes his way to the desk with the little box speakers and a photo is snapped. We also see King George commenting on newsreel footage of Hitler, “I don’t know what he’s saying but he seems to be saying it rather well.” Imagine how Republicans of today might spin that comment. But the moviemakers are not saying George advocated Hitler, they were framing the movie in the fabric of its time (when Adolph was just the crazed chancellor of Germany, not the icon of evil he would become). It also frames another interesting dimension of WWII: besides the great orator Churchill (played here with schoolyard brio by Timothy Spall, all frowns and jowls and elongated vowels), England’s representative was a King who couldn’t speak, pitted against a Chancellor who was madly eloquent.

There are details in THE KING’S SPEECH that were discovered only during its production: Director Tom Hooper and writer David Seidler freely admit to starting production on this film with the few details known to the public (all plumed hats and Hollywood medals adorning the king, in place of a private wardrobe which was never spoken about in public), but nine weeks before shooting began they came upon the handwritten diaries of Lionel Logue, direct from an attic of Logue’s descendant! As they say in Hollywood: You couldn’t write this shit! (Actually, that doesn’t refer to the tale being too outlandish to be written, just that Hollywood writers are too untalented to write anything remotely creative.)

As Hooper reveals on the audio commentary, “We thought he would always be in plumed hat and finery and medals – but he was an everyman – in black coats and top hat and suits… They visited Lionel’s flat in South Kensington quite often as king and queen, dressed normally, as friends.” Lends a humanity to a family that is portrayed – even in this film – as devoid of it.

The Royal Family’s mystique has been carefully cultivated to portray them as godlike and infallible, even though most of us common rabble are aware of their parliamentary impotency in modern times. As well as being a smashing tale loaded with friendship, respect, politics, humor and Geoffrey Rush thankfully speaking without a pirate accent, THE KING’S SPEECH pulls back the curtain on King George VI and the Royal mythos. The Royals are like you and me: powerful and frail, insecure and ambitious, fragile and resilient.

They just never go to the toilet.