Apparently, Kinsey had a big one. For a pioneer of world-shaking sex research, that’s one helluva hook. And straight from the ‘truth is better than fiction’ bin – his wife had a small one… 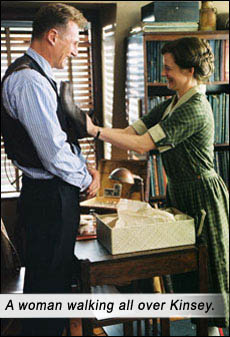 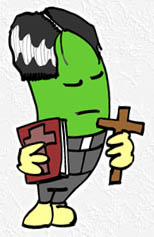 Liam Neeson is biologist Alfred C. Kinsey, who was single-handedly responsible for bringing sobriety and scientific method to the wild-eyed speculation and downright idiocy that American puritans attached to sex and perpetuated through society in the 1930s and ’40s, burying himself so deeply in the role that we thankfully forget he collected an unwarranted paycheck for that accidental appearance alongside Jar Jar Binks.

Before the opening credits of KINSEY are done, Kinsey has reeled through all of George Carlin’s Seven Dirty Words – and then some, showing us exactly which side of the puritan fence this movie intends to burn down.

A Professor at Indiana University, who laments to his sex classes, “Society has interfered with what should be a normal biological development,” Kinsey began his sexual odyssey in 1938 and by 1948, had amassed enough material (through interviews across America) to publish the revolutionary Sexual Behavior in the Human Male. Societal and political repercussions dog Kinsey (who was not known for his diplomacy – therefore was not well-liked by funders who liked being brown-nosed), thereby delaying his sequel publication, Sexual Behavior in the Human Female, until 1953. These Kinsey Reports made Kinsey a household name.

The movie’s structure is very intriguing, opening with Kinsey’s three assistants firing survey questions at him, he answering frankly and succinctly. Whenever a key question crops up about elements in Kinsey’s life that drove him towards his sex research, there is a flashback. “How did you get along with your father?” introduces us to John Lithgow as Kinsey’s father, Alfred Seguine Kinsey, basically reprising his FOOTLOOSE hellfire-and-damnation pastor, the in-joke illustrated in his citing of “the dance hall” first in his list of “lubricities,” which includes electricity, the automobile, the telephone and the innocent zipper “providing every man and boy with speedy access to moral oblivion.”

Another key question “How young were you when you no longer thought of your parents’ home as your own?” flashes back to the defining moment when Kinsey defied his father to enrol in a biology course, forsaking engineering. At 19, though indoctrinated with stupidities like “any habit which causes the sex fluid to be discharged, must be resisted,” Kinsey’s conviction was noticeably flagging, as he bitterly masturbates in the next jumpcut. Benjamin Walker plays teenaged Kinsey in the finest piece of casting since Toby Stephens played the young Clint Eastwood in SPACE COWBOYS (2000). Kinsey’s father accuses him – ironically, we discover later – of being “a person who keeps secrets,” Kinsey going on to divulge his secrets to the world via his research, whilst Kinsey Snr. in the end has to fess up to a damning secret of his own.

The uncomfortable scene where Kinsey interviews his own father about his sexual history is astounding for the fact that only when you get to a certain age you realize how nigh impossible it would be to do this.

Laura Linney is Kinsey’s – dare I pun it? – “long”-suffering wife, Clara McMillen (formerly his student), who must actually undergo an operation to accommodate Kinsey’s package. In a forcefully plain-looking character, she gives the greatest performance of her career. (And she does a damn good “John Lithgow” impression.)

Timothy Hutton, Peter Sarsgaard and Chris O’Donnell play Kinsey’s three assistants, Sarsgaard’s character (Clyde Martin) insinuating himself sexually into the Kinsey household by first becoming Kinsey’s bisexual lover for a period, then having the balls to ask permission to have sex with Kinsey’s wife! I wanna party with this guy.

It astounds me how Chris O’Donnell continues to land roles in motion pictures. Working from the Tom Cruise Method of One Glib Expression, he has yet to conjure an emotion on screen. When that day comes, somebody wake me. As Ward Pomeroy, his beige-ness is temporarily assuaged – but in a disturbing way – when he coos in his wife’s ear and we chillingly hear the words “prick-nibbler” coming out of his mouth. For me, sex will never be the same.

Oliver Platt plays the sympathetic Indiana University President, Herman Wells, who finds he must balance politics with his support of Kinsey’s outspoken and socially-disturbing research. And Tim Curry plays a stringent puritan teacher, advocating that “abstinence poses no difficulty for the college-age male,” his role made all the more hilarious due to its diametrically opposing stance in every which way to that of his most (in)famous role as ROCKY HORROR’s Sweet Transvestite, Dr. Frankenfurter.

Despite minor factual flaws, the movie stays true to Kinsey’s bravura stance and fastidious character, examining the man as dispassionately as Kinsey examined his human charges, depicting him as neither hero nor martyr, simply empirical observer.

Devoting years of his early scientific life obsessively collecting and studying over one million gall wasps, Kinsey’s discovery that the offspring of each generation are decidedly different from their progenitors is analogous to his own relationship with his father and thence with his own son.

Like the astronomer who delves so deeply into the mechanics of the universe that the intrusion of god becomes unnecessary for the existence of man, Kinsey delved into the mechanics of the physical act so deeply that the illusion of love became unnecessary for the purveyance of sex. And he was as good as his word. When Clyde has sex with Kinsey’s wife, Kinsey suffers no adverse psychological effects, treating it like a distraction that causes them to neglect their assigned household and scientific tasks.

Yet there is a strange corollary to this openness on his part. For when initially he confessed to his wife that he and Clyde were lovers, she crumbled like a house of cards. When he urged her to sleep around, assuring that it wouldn’t hurt him, she replied, “Then it would hurt me.” A double standard which exists in every relationship on earth: one partner less passionate, or more liberal, than the other, creating an imbalance in perceived reciprocation. Is jealousy the only true yardstick with which to measure our partner’s “love”? Yet the partner who displays jealousy becomes the weaker of the two; the partner displaying NO jealousy becoming the stronger. This film shows us a way out of the quagmire, which not many will grasp.

There is a characterization anomaly in one scene: Kinsey displays no diplomacy in requesting funding from the Rockefeller Foundation representative, yet in the very next scene, coaching his assistants on interview technique, he instructs them on small talk and social skills, i.e. diplomacy. Mildly diverting.

Sex education in the 1930s had become “morality disguised as fact,” the prigs in power promulgating such a critical mass of disinformation that it needed a scientist like Kinsey to catalog sexual matters in the unemotional and amoral manner that befits scientific study. And in unveiling one of the last bastions of our species’ mystery, Kinsey became cock of the walk.