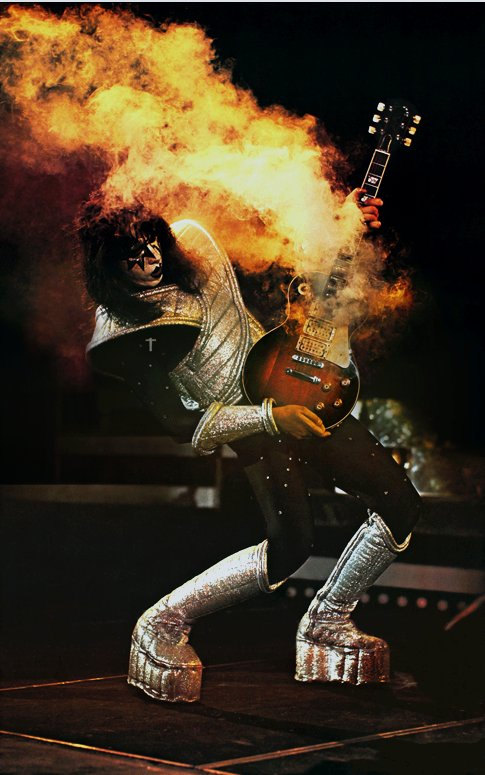 Shock Me. And everyone else!

ce Frehley’s 1978 self-titled solo album is to rock and roll what Beethoven’s Ode to Joy is to classical music. Surprising even the most jaded music critic, the guitarist from KISS goes supernova with a hard rock battering ram, like a master craftsman of his milieu, putting the musical leaders of his international hard rock band to shame (Gene Simmons and Paul Stanley).

Even more amazing when we consider that Frehley had been credited with only a handful of songs (10 in total) from the past seven albums with KISS (because Simmons and Stanley would have final choice on submitted songs and, of course, keep the bulk of writing/publishing for themselves). So it seems this bar brawler from the Bronx (who claims to be from the planet Jendell) had it in him all along and was being stultified by the dictatorial personalities of S&S. Or maybe he was just one of those gifted kids who was lazy. In retrospect, it’s a bit of both. 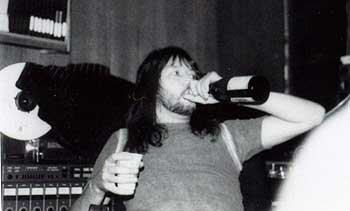 Ace Frehley 1978: Doing what he does best in the studio.

Even more and more amazing: Frehley had performed vocals on exactly 2 songs on the previous seven KISS albums, his lack of confidence making him surrender most of his songs to S&S to vocalize. Only last year (on 1977’s Love Gun and Alive II) did he find the balls to pout behind a mic as a lead singer, on Shock Me and Rocket Ride. Now here he is – performing the full album vocally.

Every studio trick in the book in 1978 is brought to bear on Frehley’s vocals to keep them on track; at the time, no Pro-Tools, no auto-tune and no pitch-correction, so they were double-tracking, slap-delaying and harmonizing the crap out of that bland flat kitchen voice. And it worked! Producer Eddie Kramer (Carly Simon, Jimi Hendrix, KISS) makes Frehley sound as powerful as Paulus Maximus Stanley, especially on shouters like Rip It Out, Ozone, and I’m In Need Of Love. But Frehley is in a range four or five tones below Stanley – any good rock tenor can reach those seemingly high notes he’s hitting – Frehley just makes it SEEM hard because we can hear it is taking all his effort. (Maybe the air is thinner on Jendell?) And there’s nothing wrong with singing in that range if you’re in tune and melodic, which they’ve achieved on the album. Like Stanley’s voice, Frehley’s voice is great because it’s distinctive; that monotone bark actually fits his easygoing personality and earthy playing style perfectly. 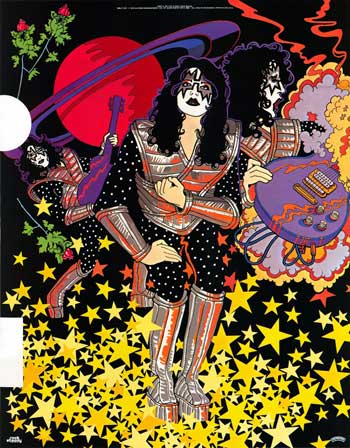 Rip It Out opens the album like an explosion in an iron foundry. Driven by Anton Fig’s musclecar drumming, Frehley rockets off the launchpad in chunky Les Paul and wailing double-tracked vocals, with a bitter song about ripping out his heart that should effectively rip out your stereo speakers if played at its correct volume, i.e. 11. A stunning drum interlude precedes a just-as-stunning guitar solo. Notably, Frehley does not try to simply shred the flesh off his bones to impress us, but sticks to the KISS ethos of creating a tuneful, memorable solo. This means: a) it was him all along that carved those memorable KISS solos, not S&S “making” him compose them, or b) he learned well from his mentors, S&S, on how to keep it memorable and marketable. Again I’d say, a bit of both.

Before the lifeguard can bring us a Jack Daniels to recover, Frehley is on the road again – Speedin’ Back To My Baby. Still driving, still beating forward on steel wheels – with a backwards-tracked guitar solo! I always thought the beginning of the solo was some kind of misplayed harmonic, but it’s the sound of backmasking, which is cross-faded into a forward-facing solo – either way, it makes our spleens explode for its awesomeness.

Ozone. One of the four gigantic pillars of this album (Rip It Out, Ozone, New York Groove, Fractured Mirror). Epic, grinding, sleazy. Importuning us to try drugs with the veteran druggist himself…

New York Groove. What can one say about this major-key manifesto? Clean, precise, pure ear-candy, tightly performed and elegantly harmonized. It sounds like such a simple song, but that’s a testament to the creative way it is built in the studio. Unique sonic construction and multi-tracking makes it almost impossible to play live with any similarity to its recorded version.

When this Bronx son sings “I’m back / Back in the New York Groove!” it’s not just an anthem – it’s a religion. Written for Brit band Hello by the mighty English songwriter Russ Ballard (Roger Daltrey, Argent, Frida, Three Dog Night, Rainbow, etc.), New York Groove would be the highest-charting single from all four KISS Solo Albums (Billboard #13), and KISS would perform the song whenever Ace was gracing the lineup onstage.

I’m In Need Of Love. Another loud Frehley shouter, with a delay effect driving the riff; into a double-time guitar solo. Will Lee (bassist for Late Show With David Letterman) shows off some creative fretwork underpinning Ace.

Majority of album is Frehley performing all guitars and practically all basses, with Anton Fig his drumming lieutenant on practically all songs. Let’s face it: Fig’s drumming on this album landed him the unsung job in KISS (ghosting on Dynasty and Unmasked). What an audition! “Yeah, I played on Ace Frehley’s Solo album”… The bulk of songs is written by Frehley, with a little help from wife Jeanette (Speedin’ Back To My Baby), and Fig on —

Wiped Out. With an opening wink to The Surfaris’ Wipe Out, and a wocka-chicka TV-car-chase guitar, Ace drawls about drinking to the point of fucktard.

Fractured Mirror. This instrumental closer to Frehley’s intense album creates one last spiraling breathtaking journey as it builds from a lone bell and a plucked acoustic, to counterpoint guitars, power chords, counterpoint harmonies and a guitar synthesizer from Jendell. Epic, medieval, evocative. As it fades, we are spent. We are speechless. We are won over…

And we wonder: With such a dambusting solo album, it is obvious Frehley can hold his own in the KISS camp, so is the title Fractured Mirror how Frehley sees himself in relation to the drivers of KISS? He – a hard-drinking, hard-drugging roustabout with miles of unreleased potential; they – reliable, sober businessmen who worked at the peak of their potential to take KISS to the top of the world. Is that the built-in sadness of Fractured Mirror? Are the plaintive cries of the harmony guitar synthesizers a lament of “Look how damn good I can be! Like those guys in my reflection, I too can drive a world class band… If only I was not a damaged soul, a cracked actor… a fractured mirror…”

Those LOONIES who populate social media nowadays with their demands of putting Ace back in KISS, and screaming havoc over Tommy wearing Ace’s makeup – all born here. Traced in a direct line back to this wonderwheeling album that shocked us into bowing down before Ace Frehley as the actual unsung navigator of the KISS 18-wheeler.

And let me add: Ace Frehley IS fucking fantastic! A nice guy, a creative, melodic guitarist, a great rock and roll composer. However, he is not destined to be a member of KISS; his head is not in the right airspace to be contracted to an international band that requires so much more commitment than an album every few years and a tour whenever he’s sober enough (to wit: the “Just For Fun” tour). He is planets above playing in bar bands, but that’s all he wants to do. He’s lucky that he found the pathway to be able to do that and earn a living.

Many opine that KISS would never have made it if it weren’t for Ace. I rise from bowing down to his 1978 Solo Album and say to these people, “Are you ignorant or just stupid?” So the alcoholic lazy guitarist who wouldn’t help load out and blew off studio sessions to play cards is the reason KISS made it? Of course, they mean his playing. But playing alone, talent alone, money alone, ambition alone, connections alone – any of these things without all the other things is not a recipe for success. In other words, if Ace had his way, and KISS booked studio time, tours and other band business around his card games, alcoholic binges, coke jags and Porsche crashes, and cancelled every gig where Ace was late for a plane, the band would NEVER have made it, and would still be playing the Hotel Diplomat. I would heartily agree with those Ace-LOONIES… if Ace were not so… fractured…

Each of the four solo albums shipped Platinum. That means that the record company made 1,000,000 copies of each album – and distributed them to record stores – in anticipation of those sales… that never happened. They didn’t sell Platinum, and hundreds of thousands of the records were remaindered – given back to be destroyed or thrown into bargain bins.

One thing is for sure: Frehley’s album is the most revered of the four, widely regarded as the closest-sounding to KISS, and it sold the most copies (unless you ask Gene Simmons). Which means that for all their gasbagging and Machiavellian managing and marketing, Gene and Paul were shown up by their guitarist as NOT being the elements solely responsible for the mighty KISS sound.

In G&P’s defense, one could argue that these Solos were the opportunity for each member of the hard rock band KISS to stretch their musical muscles in directions other than their parent project (Peter stretched so much he got a jazz cramp), so Ace might then be convicted of being a one-trick pony, unable to alter his style. But then, no one said those were the rules. Some members stretched, some found what had always been their… space. 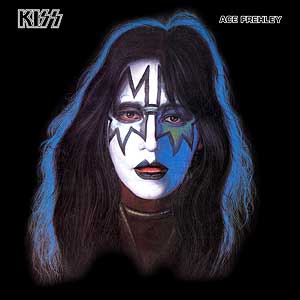 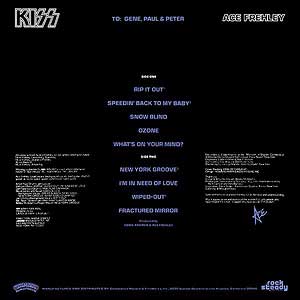 Rip It Out ♦ Ace Frehley (album)