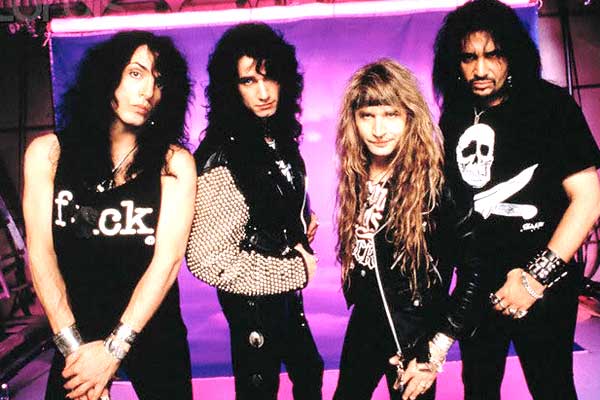 Vengeance is theirs. Alive! for GeneratioNext.

The 26th overall KISS album, Alive III is the 3rd Live album from the New York foursome whom many fans and critics had dismissed as irrelevant after their uneven studio effort Hot In The Shade (1989). But after the dambusting Revenge (1992), KISS truly effected yet another “return.” The Revenge Tour was the best of the non-makeup era, in looks, sound and attitude. And leather trousers. It was inevitable the band’s newfound vigor would spawn a Live album. (Their last Live effort was 1977’s Alive II.)

With a lineup brought about as much by tragedy as necessity – drummer Eric Singer (Lita Ford, Black Sabbath, Alice Cooper) replaced Eric Carr who died of cancer during the interim between Shade and Revenge – KISS was sounding as relevant and savvy and bombastic as they had on their Classic Six. (It’s the first Live album with a different lineup from the Original Four – Gene Simmons-bass-vocals, Paul Stanley-guitar-vocals, Bruce Kulick-lead guitar, Eric Singer-drums.)

The production on Alive III (by Eddie Kramer) is slick and thunderous. Yes, we know, there are “augmentations” to the live-ness of the tracks (and I Was Made For Loving You is allegedly a soundcheck track with overdubbed crowd), and the vocals might be a little too perfect, but the songs POP with a vitality that had been lacking overall on some of the “non-makeup” studio efforts leading up to this. 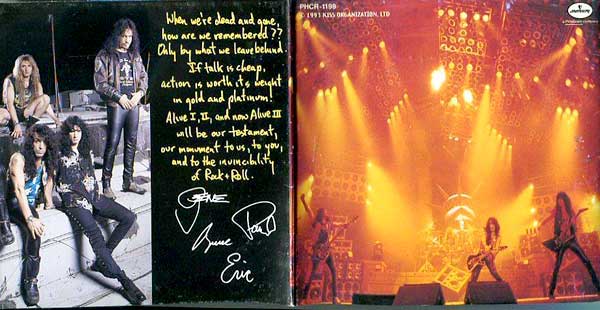 When we’re dead and gone, how are we remembered? Only by what we leave behind… our trousers.

There’s no denying some vocals may be overdubbed to fix flubs, but it can be safely fist-thumped that this is the era when both Stanley and Simmons were in the best vocal form of their lives. The opening track seals the deal: Paul Stanley’s voice on Creatures Of The Night has always had a great scarred quality. Here, it is more so, like he’s already sung for a coupla hours and he’s tapped out, at the end of his vocal rope, and going hoarse. And it gives the impression of giving his all, never surrendering to falling flat, reaching to the end of his warp-drive to deliver the correct magnum notes. Simmons follows with his favorite-penned KISS song, Deuce, showcasing his vocal training as well, his voice having matured to incorporate both demon-growl and hard-palate highs judiciously.

The dynamism and crispness of Eric Singer’s drumming makes us realize how lifeless Peter Criss’s performances were. It’s unfortunate Eric Carr never performed a live album with the band (although he was featured on the 1984 video Animalize Live Uncensored – and he tore that shit up!). Both Carr and Singer propelled KISS into the pounding 80s and louder 90s, keeping them relevant as a hard rock band.

Bruce Kulick’s guitarwork is, as always, flawless, although that may be due to overdubs, but Kulick is such a technician that that is actually one of his “flaws” – his perfection, as evidenced on numerous live videos. He never did grasp the “coolness” of Ace Frehley’s unreliable crunch. (There was a certain coloring outside the lines that Frehley did, that lent a rock and roll looseness to his playing. Of course it was partly due to his constant inebriation, and he eventually let himself get so lazy that none of the coloring was inside the lines.) Still, it’s remarkable to hear, and even more remarkable to actually see a player as exacting as Bruce.

I saw THIS incarnation of the band in San Bernadino, California, on THIS tour, and all aspects taken into account – songs, energy, visual image, performance of songs vocally and musically, stage show, etc. – it was one of the best performances of a live band I’d ever seen. The stadium was half full, but their energy never flagged, and apart from that screwy imaginary high vocal in Heaven’s On Fire, the vocals were mighty. The band also looked the best they ever did in the non-makeup era. If they were going to continue without makeup, this was the rugged direction they should stick with. They had taken back that image of being an adult band, rather than a colorful kiddie diversion (during Dynasty). Paul was openly swearing onstage again – as he had in the early makeup days. A few years hence, as soon as the makeup went on again, he would have to tone it down to G-Rating, as parents and grandparents brought their little bubbas to the gigs, which had again turned into family events.

Although to avoid this album being “stickered” (labeled by the PMRC with “Explicit Lyrics” and “Parental Guidance Required”), Stanley was not averse to amending some of his more profane lyrics. In I Just Wanna, the line, “I just wanna fuh–!” remains just that, whereas the usual live rendition had turned into “I just wanna fuck!” (In the breakdown of this song, we can hear the secretly cruel offstage keyboardist Derek Sherinian, earning his pay.)

The home video KISS KONFIDENTIAL, released in conjunction with this album (3 months later in August 1993), features many of these songs live, in a video production as slick as its record.

Tracked in November 1992, from performances at Cleveland, Detroit, and Indianapolis, Alive III is truly a cream-of-the-crop affair, from all eras. Unlike many of KISS’s live shows, there are only four songs from the Classic Six era. All the rest are from Creatures Of The Night forwards, with only I Was Made For Lovin’ You from the best-forgotten Dynasty era – a souped-up version that one would never guess was classified as “disco” when it was first released.

The liner notes include a KISS family tree, designed by the Japanese KISS fan club, an incredibly detailed masterwork, showing all the members (current and previous) from their bands before KISS formed in 1973, following each of their pathways up to 1993. 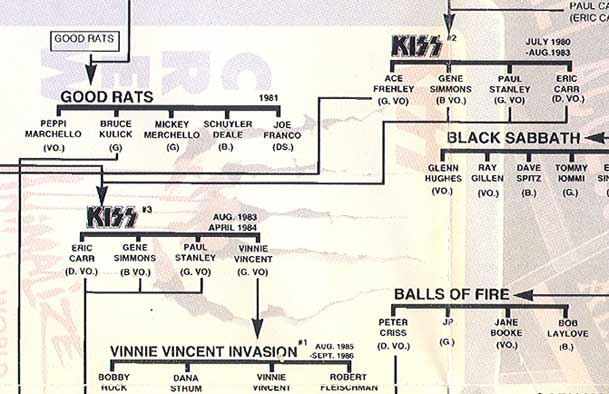 The live stage show featured the Statue of Liberty face as the backdrop, in place of the KISS sign (blasphemy!). During I Love It Loud, the frontispiece of the face peeled off explosively to reveal a skull. 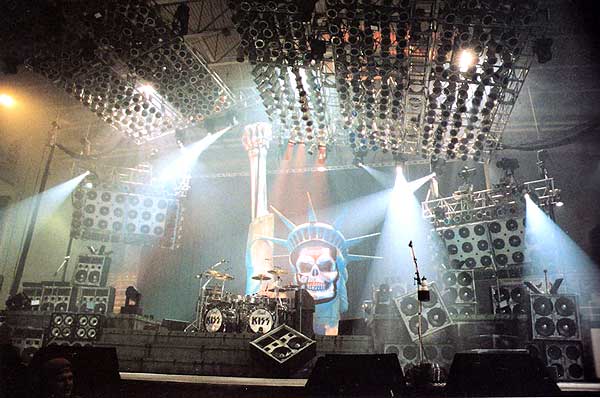 You maniacs! You blew it up!

A rushed version of the band’s signature tune, Rock And Roll All Nite, is tossed off summarily in the middle of the set, as they roll toward a conclusion that features their chart hit (Forever), a strip show (Take It Off), and other anthems vying for prominence, I Love It Loud, Detroit Rock City and God Gave Rock ‘N’ Roll To You II. Finally concluding with a real anthem – the American one – a magnificent, awe-inspiring version of The Star-Spangled Banner (writer: John Stafford Smith), which has become known as “Bruce Kulick’s version.” A canny ending to a powerful album, that leaves us drenched in sweat and patriot juice… 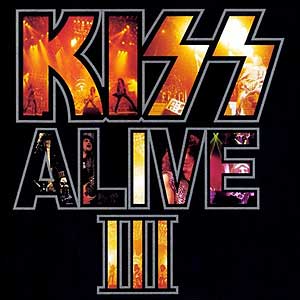 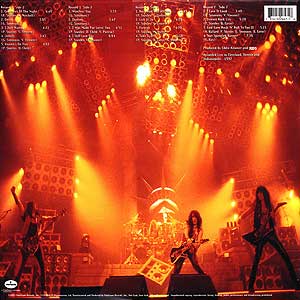