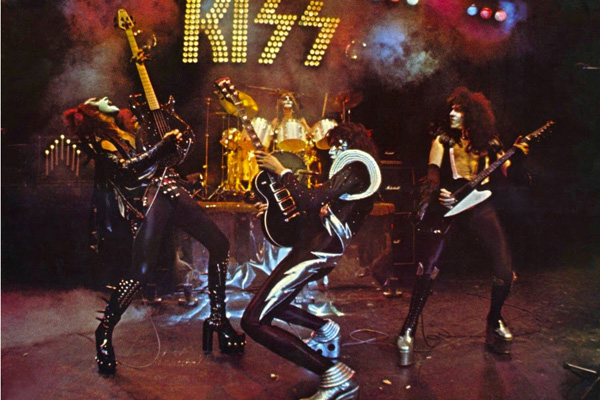 KISS 1975: Mine eyes have seen the glory of the coming of the spandex…

he album cover is tectonic. You feel it shudder like those bad camera effects in 1970’s earthquake movies. If the San Andreas Fault formed a band, this is what it would look like. Lightning bolts on the guitarist’s body run in perfect action lines, like shockwaves turning his guitar upside down from the earth-shaking joltage. Shot in a studio setting and not – as it would seem – at a live performance, the “Status Quo pose” (as Gene Simmons calls it) perfectly conveys the blistering heat of the double live album within – Alive!

After failing to make a major dent in the music industry with their first three albums (even though all three went Gold), hard rock band KISS returns with a fourth offering – a risky double-live record, not the norm in 1975 – that would become a landmark not only for the band (as it wrenched their record company out of the red and into the black) but also for the industry, which then exploited the market for double-live albums.

The first thing you hear is the crowd. Raucous, loud, constant. (Only years later would we hear the behind-the-scenes confessions of the crowd being tweaked to enhance the excitement.) The song selections are the best of the best from the first three KISS albums, Kiss, Hotter Than Hell and Dressed To Kill. Invigorated, rejuvenated, uncastrated from their boxy production, and shot at us with guns. 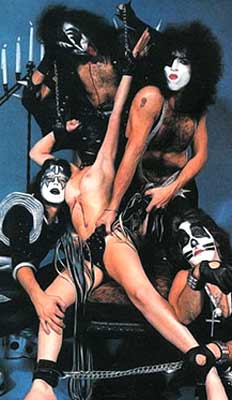 Undressed to Kill. Another of the infamous R-rated KISS photo shoots that daddy won’t let you see.

If the San Andreas Fault formed a band – this is what it would SOUND like!

Over that crowd, the MC yells: “You wanted the best and you got it! The hottest band in the land – KISS!” Guitar riff. Explosion. Bassist/vocalist Gene Simmons growls into Deuce. Insistent, driving, dirty. Then rhythm guitarist/vocalist Paul Stanley yelps a short greeting: “Whoa! How y’doin! Aww-yeah! Looks like we’re gonna have ourselves – a rock and roll pawdy tonight!” Band launches directly into Strutter, which sounds ever so “polished” compared to Deuce. (Did these guys just go from thrashing about in daddy’s garage to an international act?)

Three more Stanley-vocal songs would round out this Side One of four. These are not just dutiful recreations of album tracks; these are savage renditions of crowd-rocking stompers. Drummer Peter Criss and lead guitarist Ace Frehley round out what sounds like a well-oiled battalion rather than a band. Criss’s drumming is solid (with a featured drum solo during 100,000 Years that is all the more amazing as it continues unabated under Stanley’s audience-participation rap) and Frehley’s memorable solos are meticulously crafted and mixed clean enough to hear every note. The freneticism that was missing from the original recordings is at last captured by producer Eddie Kramer. It’s The Rolling Stones meets Led Zeppelin, all falling into the San Andreas fault…

Again, years later – confessions: even the vocals and instruments were “augmented.”

Not meaning to be a KISS apologist, but who doesn’t augment their live album, publicity photos, resumé, recorded works, etc.? Alive! happened to be one of the first of its kind; no one had established what was right, wrong, ethical or forbidden. KISS were crossing lines that were not yet drawn – which is why these revelations would only come “years later” when some of the “rules” to this game had been tacitly agreed upon.

The songs are energetic, fresh, boppy and heavy at the same time. Songs like Firehouse, Nothin’ to Lose, 100,000 Years, Watchin’ You, would truck along with a renewed vigor, while songs that already had great hooks and sounded good on record – Strutter, C’mon And Love Me, Rock Bottom, Rock And Roll All Nite – now sounded GREAT! Parasite is like a train that leapt the tracks and headed straight for you. And She is downright scary.

KISS closes Alive! with their tried-and-true kicker Let Me Go Rock n’ Roll, rather than their now-infamous anthem Rock And Roll All Nite, being a “newer” song from their last album. Yet this live version of Rock And Roll All Nite would be released as a single – kicked into outer space with a lead guitar solo where none existed on the record, and ended with the final figure of Getaway (from Dressed To Kill) – and become the canonical anthem that has wormed its way into social memory and closed a million stadium singalongs.

When you bought Alive!, the first thing that hit you was that face-melting cover, filled with smoke, spandex, and the Richter Scale falling over and catching on fire. When CD’s became the coin of the realm, I always felt the greatest loss was not just the warmth of the analog sound within, but the visceral impact of the RECORD COVERS without. Long before your stylus kissed the lead-in groove of the vinyl, your psyche was already prepped by the visual groove of the cover. 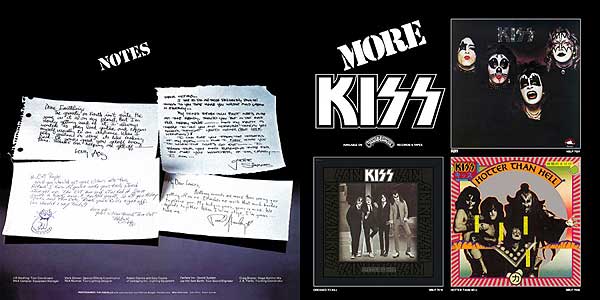 Further, with CDs, we miss out on large full-color booklets with great photos of your favorite bands, foldout posters, gatefold sleeves, we miss out on just plain readability! (I am sick to death of straining my eyes trying to read the TINY FUCKING PRINT on CD covers! This isn’t a legal contract – it’s a collection of music. Why are you making it so hard to read the lyrics, inserts or production notes? What are you trying to hide?!)

Photographer Fin Costello corroborates that that immense crowd is indeed Cobo Hall before one of the KISS gigs taped for the album. He adds he saw the two kids with the banner and asked them to bring it to the front, to highlight the size of the crowd behind them. Many contend this was not a KISS crowd because of the lack of KISS t-shirts and fans in makeup, but they speak from hindsight, not realizing there was a time in history (ahem, KISS-tory) when the KISS Army did not yet exist, and KISS were not yet a cultural phenom.

Bruce Redoute and Lee Neaves are the banner boys. Apparently, to the right of the banner, you can see Chad Smith (Red Hot Chilli Peppers) and his brother.

Alive! would go gold, platinum? double platinum? quadruple platinum? Terminology and statistics vary from myriad sources; suffice to say it charted for 110 weeks and peaked in the Top Ten in many countries. It was, and remains, a behemoth. After manager Bill Aucoin had kept KISS touring, exploding, eating and spadexing for three albums by raping his American Express card, just before a hit was put out on Casablanca Records and Aucoin Mgmt, this album that “captured the essence of the band live” paid off in demon spades. 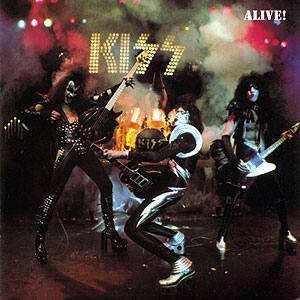 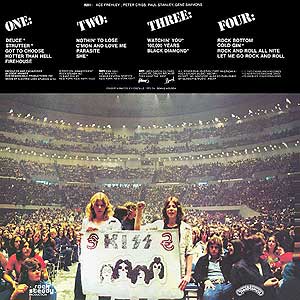