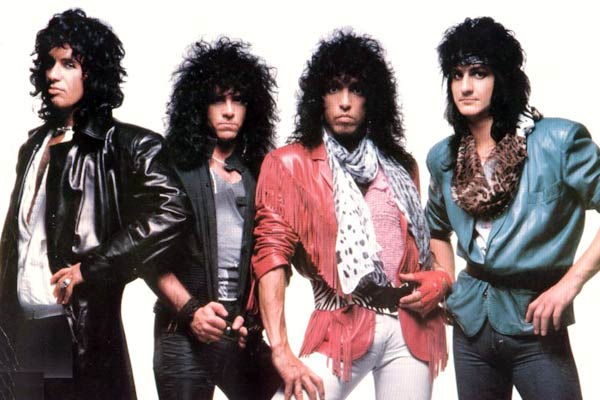 ISS’s 12th studio album was a platinum seller, with some very metal songs, but was not very appealing or enjoyable. A lot of it had to do with bees.

Animalize continued the rise and rise of KISS in their non-makeup era; through all their adversity with not solidifying a lineup, not selling out arenas, and not finding a decent pair of trousers for Gene, each of their successive albums during the 80s kept selling better than their previous ones.

Eric Carr dutifully pounds away on his double-kicks, wrenching KISS from the 70’s retro bargain bin and easily propelling them into the glitz-porn 80s. (One of the most underrated, most talented people ever in KISS, Eric went forever unnoticed because he did his job so well that there was nothing remarkable to complain about.) Animalize would feature more double-kick per square inch than any five KISS albums combined.

Paul Stanley would assume the mantle of KISS’s leader during this period. While he contributed five of the album’s nine songs, and played producer and manager as well, Gene Simmons (Stanley’s brother-in-arms co-founder) was going rogue, becoming Mr. Side Project, starting a record company, managing other bands (such as Black ‘n Blue, which featured a young, woman-hipped guitarist named Tommy Thayer, who will feature in the KISS saga two decades hence!), producing comics, and generally making a Hollywood assface of himself (“Right now I’d like to become a good film actor…”), even cutting his hair for movie roles (RUNAWAY, NEVER TOO YOUNG TO DIE), necessitating the use of a very obvious wig onstage (rather than the subtle ones he and Stanley would use a few years hence). And providing miserly, half-completed songs for Stanley to fix. Like Criss, like Frehley, like Vincent, Gene himself was nearly ousted from KISS – by Paul Stanley! 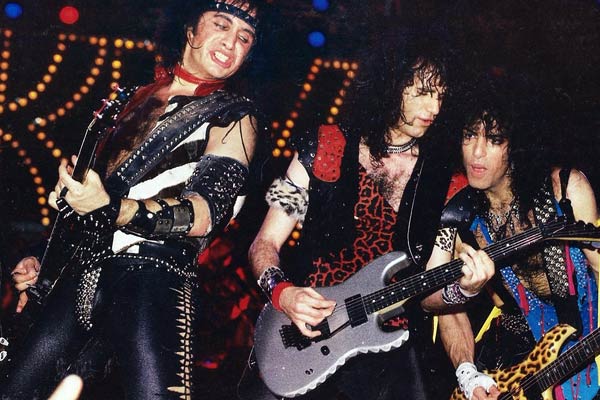 I’ve Had Enough (Into The Fire). The opener is one of the album’s best crunchers, and we are immediately accosted by angry bees. But Mark St. John’s soloing is acceptable during the intro sequence because he’s using a descending semi-quaver pattern not unlike Jon Lord’s rundown passage in Highway Star. Our ears can still latch onto something understandable. It is during the main solo that St. John pokes at the beehive with a pointed stick. Carr’s double-kick drives like a semi-trailer with no brakes as Stanley’s power tenor razes the roof.

Heaven’s On Fire. The first single, and one of the best KISS anthems since I Love It Loud, featuring Mark St. John in his only video appearance with KISS. Gappy guitar figure (reminiscent of Calling Dr. Love), powerful drums and sleazy lyrics, with the band adopting a cohesive fur-and-leather visage.

The song is in G minor, and the chorus takes the melody line up to the high C. Stanley’s range is higher than this, yet there’s something wacky going on at live shows during this chorus: Stanley never sings the chorus, very obviously moving away from the mic and letting other members take over; we can then hear two distinct voices – Simmons on the low octave and Carr somewhere in the middle – yet there is someone that sounds like Stanley singing the high octave! Offstage singers? Backing tracks? We know that certain guitar positions work better for heavier riffs and more authentically-screamed vocals but if you absolutely cannot reproduce this vocal live, compose the song in a lower key! What’s the matter with E minor?!

The vocal issue with Heaven’s On Fire makes us realize something all-consuming about the instigators of KISS, Gene Simmons and Paul Stanley: their whole ethos has always been SECRECY – and the makeup was merely one manifestation of that secrecy. Oh, the makeup might have gone the way of the glam movement, but Simmons and Stanley have never really dropped their facade. Within their philosophy of “the super band that they themselves wanted to see onstage” the secrecy manifests itself in myriad ways, like ghost musicians, not telling the public about personnel changes until it became too obvious, offstage keyboardists, studio-enhanced live albums, hairpieces and weaves, backing tracks, owning Eric Carr’s stage name; even their “authorized history” is riddled with apocrypha, e.g. “Lead Guitarist wanted with flash and balls” when the original ad actually read, “…with flash and ability.” Next thing you’ll be telling me, Gene Simmons and Paul Stanley aren’t their real names…

Burn Bitch Burn. Yeah, everyone loves the lyric, “…wanna put my log in your fireplace” (gifted Gene impersonator Craig Gass even uses this lyric to poke fun at Gene at his Comedy Central Roast in 2008), but it just seems like Gene got sick of writing words to fill the meter of the vapid verses and choruses.

Get All You Can Take. In this mid-tempo heavy rocker, Paul writes, “You gotta get all you can take / Stop waiting, wastin’ time / What fuckin’ difference does it make?…” Hilarious. Mark St. John shoots off some non sequitur spiraling arpeggios for the sake of showing us how fast he can move his fingers.

When Stanley clarifies the significance of the album title by saying, “We’re getting too technological. Animalize is a return to nature; to being animals,” I’m sure he didn’t mean those animals to be bees…

Lonely Is The Hunter. Simmons tries to recreate the savage sting of his Not For The Innocent (from Lick It Up). But the 7/4 time signature isn’t helping this mid-tempo mediocrity. The mid-section is a watery copy of the powerful mid-section of Only You (The Elder). Bruce Kulick guests on lead guitar on this song and While The City Sleeps.

Side 2 of Animalize is throwaway. Two Stanley songs and two Simmons songs that are mildly interesting and nothing special, with St. John getting lost looking for a way out of the labyrinth of notes he calls his lead solos. Except for the single, no fan would be requesting any of these deep cuts at the future KISS Conventions or KISS Kruises. While The City Sleeps, my ass! More like While We Sleep Through Side 2…

Thrills In The Night is the single on Side 2, the now-perfunctory mid-tempo ballad from Stanley. Note that by the time KISS filmed a video for this song, Bruce Kulick (St. John’s backup) was used in the video instead of St. John. In some mid-80’s interview, Simmons once joked about having to tolerate at least one of Paul’s “pussy songs” on each album. Ha! He should talk about pussy songs! When was the last time you heard your songs on Unmasked, Gene?

st. john’s baptism into the fire 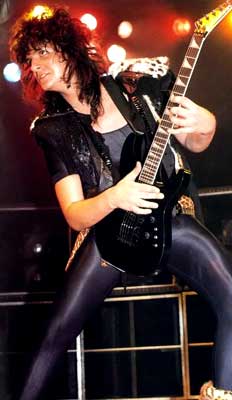 A contractual record release and tour loomed, so KISS, rather than take their time scouring the land (or at least the Sunset Strip) for a guitarist who was the best fit for the group, desperately signed Southern California boy Mark Norton, who would become Mark St. John. Whereas Vinnie Vincent at least had some affinity with KISS’s style, even if he was a knucklehead, Mark St. John had nothing in common with KISS musically. We could immediately hear how his playing drove them in a direction even worse than disco. The word “shredder” is used here in its derogatory sense. Simmons has said in subsequent interviews that trying to control St. John’s angry bees was exhausting.

And then – one day Stanley gets a call from St. John, “My hand’s all swollen. I can’t play!…” St. John would fall victim to an arthritic disease called Reiter’s Syndrome, where the bones of his hands swelled up and made it impossible for him to tour his angry bees. Though St. John’s ousting from KISS was sad due to his unfortunate health circumstances, it was serendipitous, as it allowed the band to look stage left and see the guy who suited their style much better – Bob Kulick’s shaggier brother Bruce, who was hired to be in the wings and take St. John’s place on lead guitar whenever St. John couldn’t play. Kulick would end up playing practically the whole 1984 tour. Until one night Stanley said to him, “Don’t cut your hair…”

Kulick’s one-tour stint would end up lasting 12 years and 7 albums.

Bruce Kulick’s take on the company line is a little different. (see video at 4:00) And we are inclined to believe his version because a) he was there, and b) he is still on great terms with Gene and Paul, so has no reason to contradict their story outright. However, he does raise the point that St. John’s condition cleared up after KISS returned from a six-week stint in Europe with Kulick playing all the dates and with St. John on the sidelines. The way he tells it, it was then up to Gene and Paul to decide who suited the band better – rather than a decision based on health. They chose Bruce.

If KISS were Def Leppard, maybe they could have afforded to wait for St. John to recover, like decent human beings, before going on tour – but KISS are, and always were, a machine contractually beholden to moving forward on greased steel wheels. And what the tour showed them was that Kulick suited their style more closely than the bee-keeping of Mark St. John.

St. John’s involvement with the rock and roll giants benefitted him in some small way though, as he had come from unknown bands, and was now able to hook up with world-class musicians in his next endeavors. (The company line about being ousted for his swelled hand would remain, as it would look better on his resumé than being fired for not suiting the band’s style.) He formed White Tiger with David Donato (ex-Black Sabbath), and also unleashed his angry bees on a gig with David Hasselhoff that no one in their right minds should ever mention again.

St, John’s brief stint with KISS began the joke about the KISS Revolving-Door-Guitarist position; he was the third lead guitarist to leave KISS in two years. We couldn’t blame him for his hand, we didn’t hear him in White Tiger, we couldn’t help him on his deathbed, and we will never forgive him for Hasselhoff. 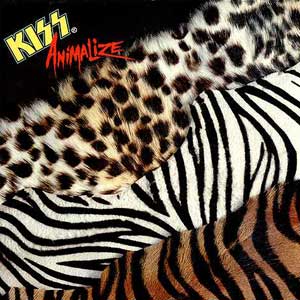 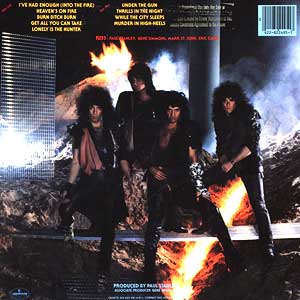 Thrills In The Night ♦ KISS (video)