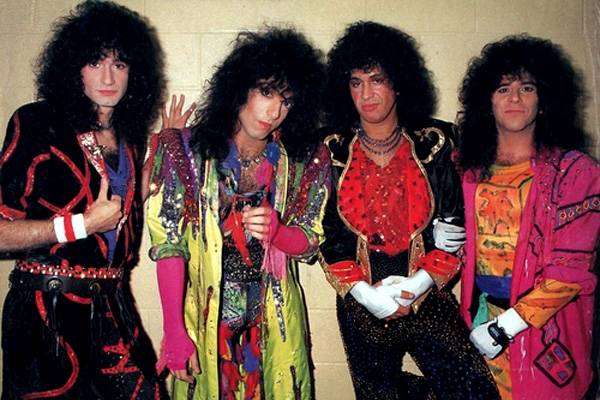 Asylum continues the “hair metal” ethos started with Animalize: heavy enjoyable rock, but with a certain smoothness to its rhythm guitars. KISS continues the wall-of-voices chorus technique they started using on Creatures (a technique probably originated by Slade in the early 70s, a noted influence of KISS), and it doesn’t look like they’ll be abandoning it any time soon, as that ear-banging practice was being employed by every 80s band worth their Aquanet.

The album front cover brings back the color scheme first adopted on the Solo Albums by painter Eraldo Carugati, and then co-opted by KISS from Dynasty onwards: purple Paul, red Gene, blue Bruce (in place of Ace) and green Eric (in place of Peter). The album name is a quirky comment on our kulture: it actually means sanctuary or protection, but we know that most people hear the word and think “madhouse,” which I’m sure is what Paul – now unintentionally the full-blown leader of KISS – wanted to convey.

One of the bands Gene Simmons managed/produced, Black ‘N Blue, would open for KISS on the Asylum tour. Tommy Thayer’s band. The hand of fate ticks ever closer.

It was sometime during this era that Paul had to have The Talk with Gene: going Hollywood meant he wasn’t pulling his weight in KISS. Gene once related a story of how he gave Thayer an ultimatum on how he could either continue down a dead-end road with his second-rate band – or he could join the KISS Organization (as a road manager at that point). Gene was that blunt, because it was business. For Paul to get through to Gene then, we imagine he might have taken the same approach; that the conversation might have gone something like this:

Gene would buy Paul a black Porsche as apology/appreciation of Paul’s blood and sweat in keeping KISS alive singlehandedly. We would see Paul driving this Porsche in the Reason To Live video from the next album – until a vindictive blond blows it up.

The non-makeup 80s were nonstop unkind to Gene. No matter how many evil faces he pulled, that mascara and rouge kept cancelling out any manly mugging. In his own words, he was “lost” without his bat-demon persona, “looking like the fuck-EE, rather than the fuck-ER…” Maybe that emptiness is what caused him to stray from KISS in the first place. Although raiding a ballerina’s wardrobe was no way to ease the pain…

King Of The Mountain. Drums. A waterfall cascade of toms toppling from a mountain into a river of driving double-kick metallion. Eric Carr covers himself in drums drums drums and pounds pounds pounds the intro to Paul Stanley’s fast-paced opener. If Carr lost 20 drums from his kit, he’d still have 22 drums left. It was the 80s and big hair, big lights, big drums, big colors, big everything was in fashion, except big fashion.

Carr was a proponent of “double-kick” – the double-bass-drum metal trend that overtook the 80s like fake tits and shaved puss – something which Peter Criss could never have pulled off even at his peak. Personally, I HATE double-kick, but the underrated Carr is one of the few who perform it well, his pile-driving exactitude propelling KISS into the decade of decadence and keeping them a relevant force.

Tears Are Falling. A great chunky beat and riff drives this standout ballad on the album, with Stanley’s voice on the edge of sexual hoarseness; a lower harmony in the second verse sends legs a-quivering. Stanley – what a songwriter! (Vidcam on a tour bus, of Stanley listening to a CD, wearing headphones, asked, “Who are you listening to?” Stanley: “My favorite singer-songwriter… me.”)

On a faux-jungle set, liana vines hanging, a rope-bridge behind Bruce, a volcano behind Eric, scattered TVs showing static, band in eye-damaging fluorescent colors, only one question in our minds: Who dressed Gene? Back when KISS were experimenting with costumes in 1973, Gene remarked that there were certain flamboyant costumes that didn’t work, because they looked like “football players in tutus.” In the Tears video, the other band members can get away with that screaming day-glo, but Gene? Coupled with that poodle hairdo (too much forehead, Gene!), he looks like a football player in a tutu.

Only Tears would be released as a single, however two other videos were made for this album, Who Wants To Be Lonely, and Uh! All Night. Besides these three standout tracks, we’re mainly looking at guilty pleasures (Gene’s Any Way You Slice It, and Secretly Cruel, and Paul’s Black Dog-gish Radar for Love), and a throwaway from Gene (Trial By Fire, where he yells, “I’m gonna live my life the way I want to!” Maybe a shot back at Paul for calling him out? More likely just a middle finger to all those who don’t find him obnoxious enough already).

I’m Alive. A metaller’s delight from Mr. Paul. All double-kick. All the time. Eric Carr hasn’t stopped drumming yet when Gene starts singing the next song, Love’s a Deadly Weapon, which sounds exactly the same as I’m Alive. See? That’s why I hate double-kick. 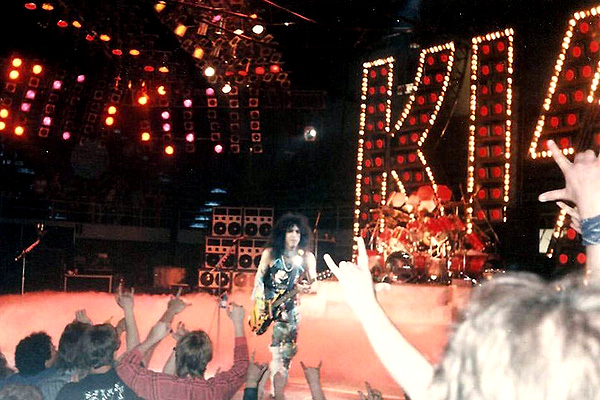 Who Wants to Be Lonely. A now-characteristic chunka-lunka KISS rhythm drives this Stanley slow-galloper, with Paul pouring his heart out in giant choruses and big wails, saying Don’t wait for love – just Do It already. As much as Simmons mouths off about his 6000+ conquests, let’s not forget that Stanley has been shoulder to shoulder with that guy through every tour and TV appearance and night off in a strange town, so it’s safe to presume he should be pretty close to Gene’s number, if not above it – he is, after all, the Starchild Lover. He even states this mathematically on I’m Alive, “Too many women / I got too little time…” (That’s mathematics for KISS.)

Paul relates how he satirized his lifestyle in the documentary THE DECLINE OF WESTERN CIVILIZATION, by having seven girls in his bed at one time, adding (paraphrasing), “Oh, they would all share my bed eventually – over the course of seven nights, but never all together like that! I hoped people could see that it was satirizing the lifestyle they thought I led…” And there are tales he relates in pathos, of eating alone at a deli after a gig, or going home and watching reruns of the Mary Tyler Moore Show. Yes, but that was by choice. Do we doubt that the lead singer of KISS was not sought out or invited to however many after-parties were raging in every single town they played?

Uuuuh, a song about being lonely… uuuuh, while only seven girls a week tramp through your sheets… We’d ALL like to be THAT lonely, Paul…

Video is shot in annoying soft-focus, with the band on a large white stage surrounded by scantily-clads taking showers. I’m getting lonely again. The band’s attire in colorful glare, Paul especially glittery. We wonder how Gene ever upped his total while looking like Donatella Versace in a man-dress.

Uh! All Night. Another chunka-lunka melodic thumper that creeps into you, as every Paul song does. Another soft focus video, another load of scantily-clads. The director really scored some super hot chicks for this one, dressing them in colorful clothes and making them play guitars and dru– oh wait, that’s the band.

Paul in pants of multi-colored Post-It notes, naval cap, and a smashed-mirror guitar – yeees, my son! But it’s not his classic PS-10, it’s a BC Rich Warlock. Oooo yeah! He plays it by pouting next to it. Carr is dressed as stupidly as the rest of the band – but somehow looking uber cool, bashing away with two sticks in each hand! And uh, who dressed Gene?

There were TWO pendulums at work on KISS’s career – one swung to the music, the other, their image. And the pendulums swung at different tempos. Taken that they both started at the same high point in quality, by 1979’s Dynasty, the costumes were colorful and iconic, yet the music was decidedly lousier. The Elder (1981) threw both pendulums out of whack. No one knew which way was up or down. Then Creatures brought everything back into sync.

Lick It Up (1983) started the divergence of the pendulums, as the music was still righteously heavy, yet the image pendulum was swinging away from cool, as KISS fell into a void of colorful ripped things and glittery sequins and klown-colors. By 1985’s Asylum, which was still a reasonably heavy album, they had reached the nadir of fashion crime. The music pendulum would reach its nadir on the next album, Crazy Nights (1987), where the image pendulum had started its swing back towards righting itself. Image and music would come back into lockstep two albums later with the black and silver, leather and chainmail, metal and monster Revenge (1992).

With Asylum, KISS were more full-blown glam than Poison or Enuff Znuff. Which makes sense, as KISS – being KISS – were once again doing things bigger and better than the bands most associated with that milieu. Also ironic, considering that KISS were once touted as glam (in 1974) due to following the original glam movement of the late 60s (Bowie, Bolan, Sweet, Gary Glitter, et al), which looked totally different, attested by their black and silver theme, which in retrospect would be called punk or gothic! Over the course of a decade, the glam pendulum had swung so far into Aqua Net, it had changed the meaning of glam!

As Charlton Heston screamed, “It’s an asylum! An ASYLUM!” 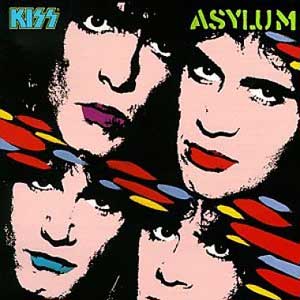 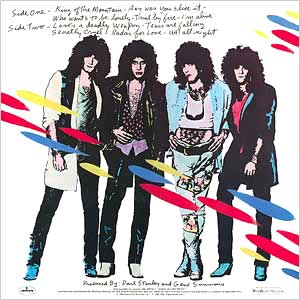 Who Wants To Be Lonely ♦ KISS (video)