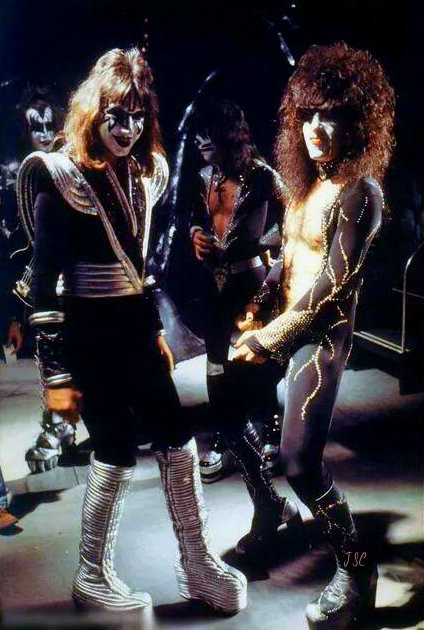 “Hi, you’re wondering why our albums are the best?
We’re the GUITARISTS. ‘Nuff said.”

Quadruple Fantasy, Together As One.

y definition, The Best Of The Solo Albums should be a super collection. It is. Many fans feel it should have been the 1978 KISS album after Love Gun, rather than the extended, drawn out cavalcade of four Solo albums. This collection was not released in the United States, but in Europe and the Antipodes (that’s Australia and New Zealand to all those people standing on their heads in America).

Best Of consisted of 12 songs, three songs lifted from each Solo Album. Paul Stanley’s and Ace Frehley’s could have actually provided more tracks, whereas Peter Criss was stretching for credibility even with three. Gene? Quota achieved, meh. The album featured the four Eraldo Carugati portraits together on the front cover, a potent visual, cementing the “colors” of each respective KISS member – Gene-red, Ace-blue, Peter-green, Paul-purple – their respective hues for the rest of their career.

The music was varied enough to keep the album actually interesting. In fact, any band would be proud to release an album of such wide-ranging material – from heavy metal (Rip It Out) to pomp rock (Take Me Away), to samba (Don’t You Let Me Down) to Beatles-esque soft rock (Mr. Make Believe) and theatrical rock and roll (Radioactive). If Queen, Prince or Todd Rundgren released these exact same stylistic experiments on the one album, fans and critics would giddily call them diverse.

Of the four Solos, only two members showed off the talents they are renowned for in their band – Ace Frehley, lead guitarist, set his album alight with firestorm guitar solos, and Paul Stanley, lead vocalist, lung-powered his diversity from falsetto to soft rock to chest-beating full-throating into the next century. Meanwhile, even though Gene Simmons was by far the most recognizable member in the band, he was not renowned for his bass guitar skills (though they were by no means lackluster), so though we imagined he might take this opportunity to amaze us with intense gallop (like 100,000 Years or Parasite) or cool strut (like Sure Know Something or Calling Dr. Love), or expertise like doubling guitar lines (in Watchin’ You, much like Vai and Sheehan would display in the far future), Simmons surprisingly didn’t even touch his chosen band instrument, opting to play rhythm guitars. And Peter Criss, who was renowned for his instrument, as witnessed in his drum solos, opted out to the point of apathy, keeping such straight beats that Phil Rudd from AC/DC called and told him to dial it up to a 5.

Many critics consider the Solo albums themselves a musical debacle. (Probably more to do with the overblown expectations of the record company and the audacity of the band, rather than the actual content of the albums.) Funny, considering that whole genres were puking up musical debacles during 1978 – disco and punk and New Wave, to name a few. Not saying all the artists or offerings from those genres were puke-worthy; like any genre, 90% would be crap and the 10% of cream would rise and remain noteworthy. Just saying there was a lot more in the music biz that people could have focused their vitriol on, rather than an ambitious band that was providing good to great rock and roll.

Since we’re all here, together as one, let’s use the opportunity to rank different aspects of the Solo albums:

Who has the best opening song of the bunch? Ace, then Paul’s and Gene’s a close second and third, with Peter far, far behind.
Ace:      Rip It Out
Paul:     Tonight You Belong To Me
Gene:    Radioactive
Peter:   I’m Gonna Love You

The best closing song was a close race between Ace and Peter, with Ace only winning out because of the complexity of Fractured.
Ace:      Fractured Mirror
Peter:   I Can’t Stop The Rain
Gene:   When You Wish Upon A Star
Paul:     Goodbye

Each band member released only one single from their album, except for Peter, who also released You Matter To Me.
Ace:      New York Groove
Gene:   Radioactive
Peter:   Don’t You Let Me Down
Paul:     Hold Me Touch Me

One song from each Solo album was included in the live set for the Dynasty tour. Only Ace’s New York Groove would survive into successive tours.
Ace:      New York Groove
Paul:     Move On
Gene:    Radioactive
Peter:   Tossin’ And Turnin’

most personnel used (musicians and writers)

The Best Song on their albums was again a race between the same two Ace and Peter songs, with Ace inching out Peter; Peter’s nostalgic lament beats out Paul’s power statement; and though Gene’s power pop is the heaviest, it is the least “constructed” of the four.
Ace:      Fractured Mirror
Peter:   I Can’t Stop The Rain
Paul:     Tonight You Belong To Me
Gene:    Radioactive

Peter wins in a competition that you don’t want to win; his “worst song” is worse than Paul’s or Gene’s worst songs, and by the time you get to Ace’s worst song, it’s kinda on the upswing to being a “good” song.
Peter:   You Matter To Me
Paul:     Hold Me, Touch Me
Gene:    See You In Your Dreams
Ace:       Wiped Out

soundscan: blindsiding us with its blind side

For veteran artists that existed prior to 1991 (Billy Joel, The Rolling Stones, Bruce Springsteen, The Eagles, Deep Purple, Chuck Berry, etc.) Nielsen SoundScan, instigated in the United States in March 1991, to track sales figures of albums and singles, is the shittiest method by which to misinterpret their album sales. Other countries use other methods and other institutions. Conceptually, SoundScan is, in fact, an excellent system, which should have been in place when records started selling back in the Stone Age. Then everyone would be on an equal footing, but due to the computer technology it uses, that was impossible. So it’s a hot mess, making newer artists look much more successful than veterans.

This is the problem: For any albums or singles released prior to March 1991 (such as the bulk of the KISS catalog) Nielsen only sees the sales figures for those titles AFTER that date, obviously because their system didn’t exist before that date. And they don’t ADD any reputable data to their belated figures – they just ignore everything else! So all those sales prior to 1991 don’t exist in time and space. If you released an album and disbanded prior to 1991, and your album stopped selling, according to SoundScan, you don’t exist in music at all!

The Recording Industry Association of America (RIAA), established in 1952, is the other sales authority in the United States, tracking “shipments of albums minus potential returns,” and has never used the Nielsen system. Great – the right hand doesn’t know what the left hand is doing. Which is why we still see reports of each KISS Solo album “shipping platinum,” meaning that 1,000,000 copies of each album were shipped to stores – never taking into account the bulk of those albums coming back!

An intriguing thought: Since the RIAA are the official body that awards Gold and Platinum status in the United States, maybe Casablanca and KISS were cannier than we thought by spending the money (i.e. losing the money) to “ship platinum” – because each of those albums were then awarded Platinum status. Just like SoundScan has blinders on for prior-1991 releases, the RIAA has blinders on for actual sales. Voila! A Platinum award, a top-selling band, status and historical credibility – by basically buying your own way into the record books! (It’s almost like the job of United States President; most presidential candidates make millions more in their consultancy jobs or from their independent businesses, yet vie for a job which pays only $400,000. It’s the prestige that the title brings – exactly like Platinum status. You go down in history for the Presidency and – just like Platinum status – you buy your way into it!)

The Kinks (starting in 1964) released 26 of their 28 albums before 1991. NSYNC released the first of their 3 albums in 1997. Does SoundScan history show NSYNC as selling more albums than – ergo perceived as “more successful” than – The Kinks? Look it up. I’m too bitter to be bothered.

As Dirty Harry says, “It’s a shit system, but it’s the only one we’ve got, and I’ll go along with it until something better comes along.”

And here’s another Future Shock fact, as detailed by a blogger, “SoundScan doesn’t mean shit in the era of digital purchases and downloads.” He’s right. Another system has come along under the noses of RIAA and SoundScan. Which means, if we take only digital downloads into account, that The Hottest Band In The World actually is – One Direction! Doesn’t life suck?

This is probably the least contentious of the Best Of opinions. Most fans and critics would rank the albums in this order, some with Paul at the top, or with Gene and Paul switched around in 2nd and 3rd places, though I have seen the odd list with Peter at the top. (Those people are now weaving baskets in white rooms with no windows.)
Ace Frehley
Paul Stanley
Gene Simmons
Peter Criss 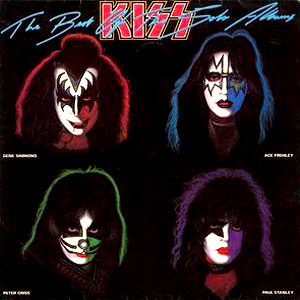 1/ PAUL STANLEY
Hold Me, Touch Me
Tonight You Belong To Me
Move On
PETER CRISS
Don’t You Let Me Down
Hooked On Rock And Roll
I Can’t Stop The Rain
2/ ACE FREHLEY
New York Groove
Speedin’ Back To My Baby
Rip It Out
GENE SIMMONS
Radioactive
Mr. Make Believe
Living In Sin 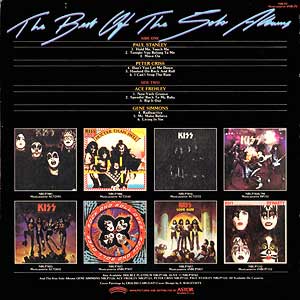