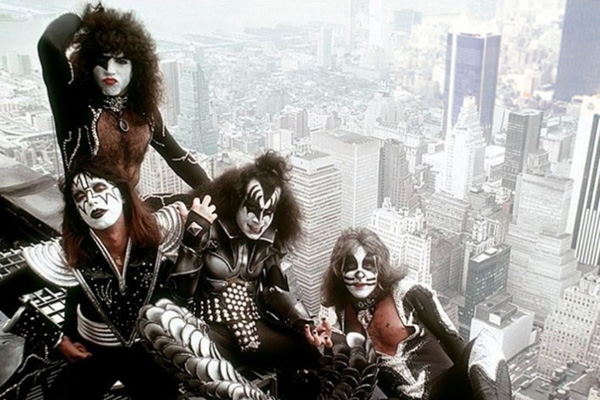 KISS 1976: Where better to rule an empire than from the top of the Empire State?

Destroyer, the fourth KISS studio album, marks the beginning of a new phase in KISS-tory. That phase where the fearsome face-painted foursome from New York (Paul Stanley, Gene Simmons, Ace Frehley, Peter Criss) would become the Biggest Band in the World. Destroyer ushered KISS into their KISSteria heyday. There would be three more best-selling KISS albums to demarcate this period (Rock And Roll Over, Love Gun, and Alive II), a KISS movie, a KISS comicbook (using KISS’s own blood), KISS tours, KISS keys to the city, KISS merchandise, polls that placed KISS above Led Zeppelin, tours that placed KISS above The Beatles. That VH1 special When KISS Ruled The World is referring to THIS period on Earth; when Paul could point to a bunny in a Playboy magazine and have his managers deliver her unto his jacuzzi by the next night.

With Ken Kelly cover art that captures the ground-shaking sonic boom of the vinyl within, Destroyer also marked a “return” of KISS to the studio after their obscenely successful live album, Alive! No longer having the luxury to complain about bad production, the band felt the pressure to deliver, and producer Bob Ezrin (Alice Cooper’s Billion Dollar Babies, Welcome To My Nightmare) was employed to take KISS to that next level of musical respectability.

He failed– I mean, he succeeded. Depending on who you talk to, Destroyer is either an over-produced pompous mess that blunted KISS’s hard rock edge — OR — a juggernaut with monumental production that moved KISS into the big leagues.

Since people are idiots, the truth lies somewhere between multi-platinum album sales and that Playboy bunny’s thighs. 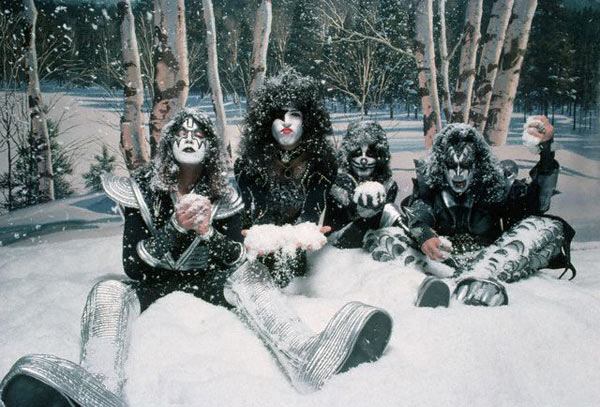 When Hell freezes over…

Glossy! That’s the first word that comes to mind when Detroit Rock City tears open the album (complete with an intro bumper which told a little story in foley; Ezrin brought in the concept of sound effects to add drama to the offering). No more raw garage band that stank of “potential” – here was that potential realized, in gigantic chords, booming drums, towering vocals, harmony guitars, and lots and lots and lots of hall reverb. Driven by drums and bass, with sparse guitars used in a kind of orchestral capacity, Ezrin, like Michelangelo, finds the statue within the stone, meticulously carving Stanley’s once-coarse composition into a gleaming monument!

King Of The Night Time World. Even bigger than Detroit Rock City, Bob Ezrin once again takes a straight-ahead composition (by Kim Fowley and Stanley) and molds it to exemplify the new grandiosity that KISS purveys on Destroyer.

Interesting to note that Ezrin not only produced, but has co-songwriting credits on 7 of the 9 songs. We would not be wrong in calling Destroyer HIS creation as much as Simmons’ and Stanley’s.

God Of Thunder. Wrenched from the Starchild’s grasp (written by Stanley as a fast-paced womanizer), and bequeathed to the Demon, Ezrin slows the pace and empowers Stanley to rewrite the lyrics as more mythological, less pussy-lanimous. Thumping unique drum pattern – kick kick kick triple-snare – tri-tone riff and tuned down a semitone (to Eb) for maximum evil overdrive, Simmons’s voice treated with engine degreaser, with Ezrin’s own little kids adding those un-sane cherubim voices; fevered cracklings and far-off yowlings, lighted ashes filtering from a gunmetal sky, with a lead solo that moans in agony, as the Demon growls, “I am the lord of the wasteland / A modern day man of steel…”

No other song in the KISS catalog would fit a KISS character so descriptively (except Ace Frehley’s 2,000 Man years later). God Of Thunder would become Gene and Gene would become God Of Thunder. The song would follow his convulsive blood-spitting act; in later years, the god would “fly” to the rigging to deliver his unholy message. God Of Thunder is THE song that defines the visual concept of the album, with Gene embodying that presence on the cover art: breastplate and batwings, with dragon boots styled from the likeness of GORGO. This is the song that encapsulates that image of the four monsters atop a crumbling temple lording over a wasteland, i.e. from the looks of it, Detroit.

Suddenly, a change of gears, as we hear the opening strains of Great Expectations, with acoustic guitar strumming under a piano – but the lead guitar over the top of them is wailing the opening strains of the second movement of Beethoven’s Pathetique! (Sonata No. 8 in C Minor, opus 13.) Who said Kiss didn’t have kulture? Curious juxtapositions, as this classical motif underscores Simmons warbling very unlike the Demon, slightly off-key, in a decidedly lecherous bent, “You watch me singing this song / You see what my mouth can do / And you wish you were the one / I was doing it to…” According to Simmons, the hardest song to record on Destroyer due to Ezrin’s grandiose arrangements – and then the Brooklyn Boys Choir chimes in on the chorus to seal the cheese pomposity! 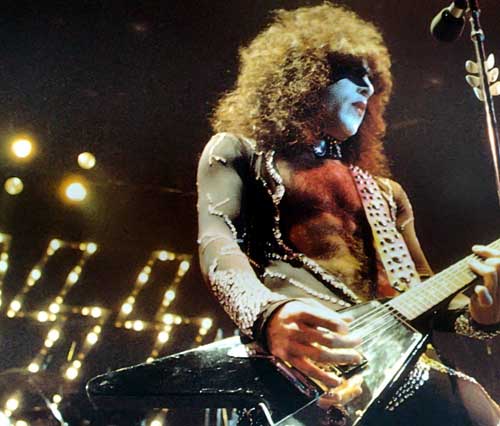 The Starchild 1976: Destroyer of bunnies.

Flaming Youth is another attempt at a fist-pumper for the teenies. Amusing to hear Stanley – from all those decades ago – singing, “…and my power is my age…” meaning at that time, of course, his YOUTH (24 years old); whereas now he can sing the exact same line and it would still be relevant but for a different reason – his experience! Dick Wagner, Alice Cooper’s ominous guitarist, cranks out a solo while Ace plays cards in the other room.

Sweet Pain is Gene’s ode to sadomasochism: “My leathers fit tight around me / My whip is always beside me…” It’s probably the closest Peter Criss comes to Keith Moon, especially during the last verse.  Wagner solos again – like a needle through your frontal lobes. At least, that’s what Ace Frehley says it feels like.

The anthem idea worked so well on the last album, they try it again with Shout It Out Loud, Stanley and Simmons trading off vocals in the verses. “It doesn’t matter whatcha do or say / Just forGET the things that you’ve been told…” I love the way Simmons attacks that high note, descending into that melody line, playing itself out like a river cascading down a mountain. Spacious production allows a grand piano to pound octaves right there under the guitars, and the same ethos of being able to hum the guitar solos is applied.

Beth. Originally released as the B-side to the single Detroit Rock City, as Paul tells it, “DJs just turned the record over and started playing Beth.” Ezrin would bring in the New York Philharmonic Orchestra to back Peter Criss’s heartfelt vocals. At live shows, Criss would perform this song to an orchestral backing track. 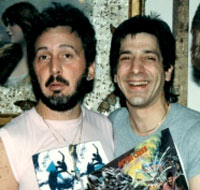 Peter Criss with the actual writer of his songs, Stan Penridge.

Stan Penridge (guitarist in Criss’s previous band Chelsea) and Bob Ezrin wrote and arranged the ballad that would become KISS’s most successful charting song in the U.S. (Billboard #7). And Peter Criss would take the credit. Yes, he contributed ideas – lyrically only, because he didn’t play an instrument – but the bulk of the lyrics and melody were penned by Penridge and all the orchestration was arranged and produced by Ezrin. Peter’s name stamped on it did not mean he helmed it, but rather that he was the identifiable KISS member who was claiming a part of its creation. In later years, the Beth feud between KISS and Criss would erupt over Criss boasting that “his” song reached the top of the charts, that “his” song was more successful than any of the actual lead singer’s songs (Stanley), and boasting that “he” won awards for Beth, not realizing/ comprehending it was the band KISS that won the awards.

According to Penridge (1951-2001), he wrote the lyrics “…almost word for word, from [a band member’s] responses to his wife’s constant calls that interrupted our rehearsals… Look at the lyrics and view them as a hen-pecked hubby’s remarks to his nagging wife…” Ironic then, that Peter should be the one doing the nagging in the end…

Stanley’s Do You Love Me? ends the album on a rock solid note. Not to get too Freudian, but Paul is again the one to beseech – like Dudley Moore in ARTHUR – to look past the trappings of wealth: “…But – do you love ME?”…

Even superheroes gots to know… 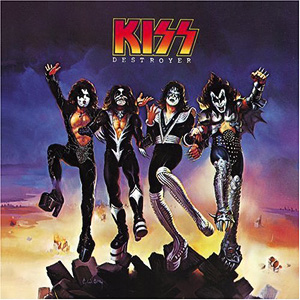 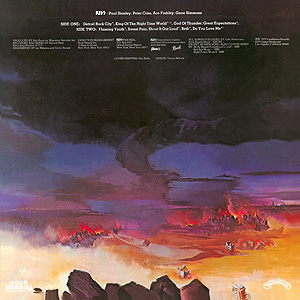