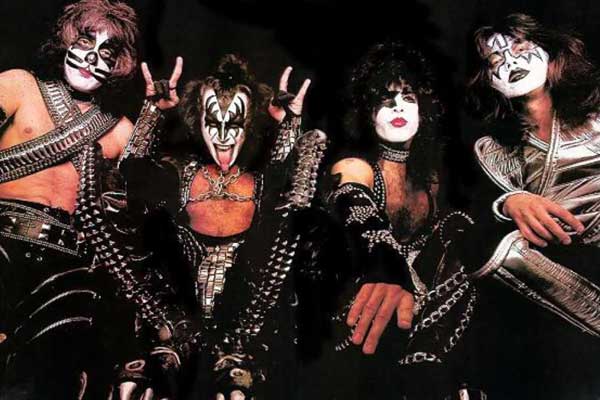 KISS 1978: As far as people knew, KISS were still going to bed in their Love Gun jammies…

erfectly rounding out Classic Era KISS, their 9th overall album Double Platinum showcases all the “hits” that made kids paint their faces, pick up guitars and worship the devil. Or the gods that were KISS.

Notwithstanding their two live albums, which were basically Greatest Hits overdubbed with crowd noise, Double Platinum is technically the first Greatest Hits album from The Starchild (Paul Stanley), Demon (Gene Simmons), Spaceman (Ace Frehley) and Catman (Peter Criss), representing songs from their first record, 1974’s Kiss, to their latest, 1977’s Love Gun, and is a good place to start for the Kasual Kisser. Although a dyed-in-the-wool KISS fan might have other things to say. And he’s going to say them right now…

I quoted “hits” because over half the songs on this 20-song double album are not singles (so by definition, could not possibly be “hits” – which is probably why the album was not called “Greatest Hits”), exactly half are lifted from Gold (not Platinum) albums, and 4 are lifted from the only double-platinum album at that point (Destroyer). KISS’s record company, Casablanca, and its head, Neil Bogart, framed the release as if they were “congratulating” KISS on stellar sales, in order to deflect blame off the band for calling the album something so demonstrably untrue. Even if Bogart is claiming this is a “double” album of “platinum” songs, only the first part is true! What balls! Who but megalomaniacs would name their album “Double Platinum” with not one certified double platinum song on it?!

Double Platinum consists of remixed early material (that needed it), remixed later period material (that did not need it) and other mad scientist experiments. In retrospect, this album may have been a record company gambit to buy time for the upcoming Solo Albums, which went into production after the ill-fated filming of KISS MEETS THE PHANTOM OF THE PARK. 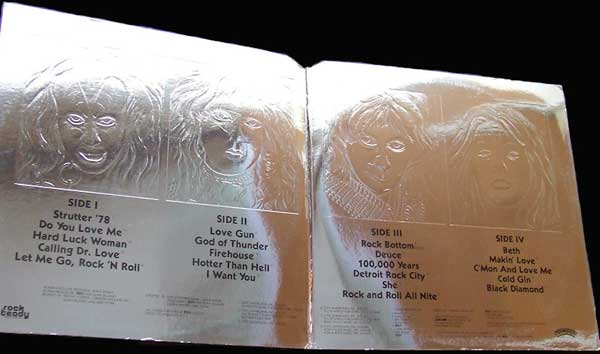 Strutter, the first ever KISS song on the first ever KISS album, has been given a bad touch, as from a rapist priest; someone’s bright idea to re-record it with a DISCO BEAT! (A grim foreshadowing of things to come?–belch–Dynasty.) The subtle change in the hi-hat shuffles (and a more piercing guitar solo) warrant renaming it Strutter ’78.

As it was the best song on the album it was first released on, Calling Dr. Love is undoubtedly also the jewel of this collection; a killer remix with reverse reverb at key points (including the intro), and a wailing beefed-up guitar with horror-movie tone, like a hippo wading just under the surface waiting to sink its jowls into your thigh. The guitar solo is a perfect example of the “slow vibrato” that Ace Frehley is renowned for; after the solo, the chorus lead vocals are omitted, allowing us to simply soak in the thrust of the riff. Until that hippo bites our thigh.

Of course, any songs pre-Alive! (1975) benefit from remixing, due to their original meager budgets (Let Me Go Rock N Roll, Hotter Than Hell, Deuce, etc.), all sounding beefier and crisper, with original horrid drum sounds improved upon. But then, with many of the post-Alive! songs, sometimes a remix is just… a remix; an alternate version for curiosity’s sake. Producer Sean Delaney puts the whole album through the compressor car wash to standardize the sonic quality across the board.

Some of the experiments include: Detroit Rock City, not only remixed, but re-edited as well, removing the foley that told the story of the guy driving his car to the show and crashing, and throwing in another chorus in the middle of the epic solo. The classical guitar intro to Rock Bottom is tacked onto the beginning of She. Black Diamond is wrap-around… and Firehouse is inexplicably speeded up slightly, with Paul chipmunking his way through it. Why they do that?

The ultimate irony: Back in 1978, some of the songs in this collection were only 2 or 3 years old, and being touted as “classics” or at least “hits.” But most of them were failed singles or album cuts, and some fans were still hearing some of them for the first time with the release of this album. But now, in 2015… take a look at that song list. It’s a definitive KISS live show! Absolute cream of the crop! If one were to witness KISS at any of their musical peaks (1977 Original Lineup; 1988 Carr & Kulick; 1992 Revenge Tour) performing just those songs – on the iconic Love Gun stage! – one could die in peace. Also, over the years, all the albums featured on Double Platinum actually sold double-platinum and beyond (though many have not been re-certified as such), meaning that all the songs are now, in fact, from double-platinum albums. In other words, Double Platinum was virtually a lie at the time of its release – but has become a self-fulfilling prophecy!

Could we expect anything less from gods? Or devils… 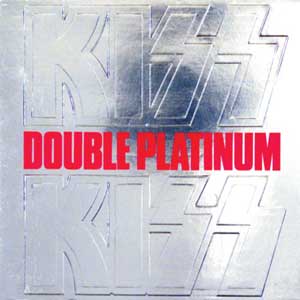