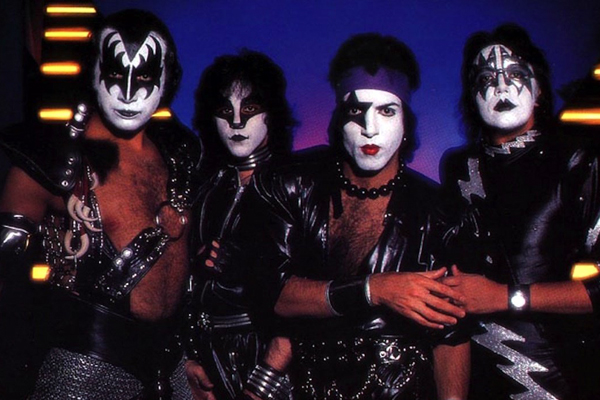 A Light amongst the Dark.

he most maligned album in the KISS catalog, (Music From) The Elder – is also their best by a mile! The ninth KISS studio album shifts gears so ferociously that the gearbox falls out and everyone goes through the windshield.

Constructed with a solid foundation of classically heavy riffs, augmented magnificently by orchestral flourishes and dramatic passages, with songs that are lyrical and musical journeys about self-realization and honor, and with crystalline production from Bob Ezrin (coming off producing Pink Floyd’s The Wall, 1979), The Elder is a masterwork of meticulous design, by Paul Stanley (guitars, vocals), Gene Simmons (bass guitar, vocals), Eric Carr (drums, backing vocals) and minimally Ace Frehley (guitars, vocals).

We follow a chosen Boy, overseen by mysterious guardians called The Elder, on a sword and sorcery  journey to defeat an evil force rising to destroy the Earth. Um… Okay, everybody out of the pool! And get the hookers out the back door. Stop that pawdying and take off that dance belt. KISS gets medieval on our asses. In a world where magic and integrity prevail, where the only big knockers are on the castle doors…

The steel-tinged guitar fury of The Oath opens the album. “Like the blade of a sword I am forged in flame…” (In some markets, the journey opens with Fanfare. Either way, the continuity makes sense.) Our first reaction is that KISS has unapologetically returned to their hard rock roots after the tinfoil faux-metal of Unmasked. Paul Stanley’s voice alternates between his power tenor and falsetto, awash in reverb and delay, in character as the chosen Boy, vowing to ride into battle and fight for all that is good. Is he serious? Like the blade of a sword he is! During this song, for the first time, we hear the ramming double-kick of Eric Carr (recently replacing Peter Criss, having only played live with the band on an international tour supporting Unmasked). And his drumming on the whole album is simply stupendous! The new boy done good! Stanley’s lyrics of finding ancient thrones and being a servant to unknown allies takes us by surprise.  But not as much of a surprise as  —

Fanfare. The American Symphony Orchestra blows away our cockles with a thunderous overture. The majestic sweep is continued in —

Just A Boy. In the symphonic chorus and glittering organ, we envision viking ships and broadswords, and scantily-clad maidens with big knockers… As loathe as I am to use the term “soaring,” there’s no other way to describe the lilt of this paean, “Ooh, I’m no hero / Though I wish I could be…”

Dark Light. “You can be attacked and you won’t know what it is…” Lead guitarist Ace Frehley – spaceman – ironically brings the haughty concept album back down to Earth with his dirty riffing and characteristic home-schooled voice, throwing in a blistering solo.

And then… it’s the Bat-Demon’s turn at bat. But – surprise! – the two Gene Simmons offerings that round out Side 1 of The Elder (Only You and Under The Rose) are mid-tempo songs about finding yourself. “Only you have the answers / But the questions you have to find…” Though they exhibit ominousness and dangerous portent, and do truck into heavier territory as they progress (the latter utilizing St. Robert’s Choir), we find that Simmons is not even singing in his demon-esque growl, but using a smoother, almost “trained” timbre. I personally loved this direction, this thoughtfulness and reigning in of the animalistic, but I can see how it would make diehards spill their KISS Kocktails.

Side 2 opens with more shock and awe, as Simmons continues the country club vocals, to great effect (we hear this crazy madman can actually sing) on the moving ballad, A World Without Heroes, where the main riff is played on a xylophone! “A world without heroes / Is like a world without sun / You can’t look up to anyone / Without heroes…” A meta-critique on Gene’s own role in the food chain?

Mr. Blackwell. The bat-demon unfolds his leathery wings and emerges at last. “I am a sinner who just loves to sin / I am a fighter who just loves to win…” The villain of the piece. With Frehley’s disdain for this album, he reportedly only played on the two songs he composed, Dark Light and Escape From The Island. Stanley performed much of the lead guitar duties very tastefully. A feature of Blackwell is the distorted wah-solo – and it’s anyone’s guess who performed it.

Escape From The Island. In this instrumental, Frehley cooks, with Carr on tribal drums. It is for us to envision exactly where the story is going, who is escaping what island, from whom or what, and for what reason…

Odyssey. “Once upon not yet / Long ago someday…” A song written by Tony Powers, themed around his own mini rock opera, Paul Stanley appropriates and sings it in a register lower than his characteristic banshee yowls, throwing us for another loop. Ezrin’s epic orchestrations accompany Stanley, who then slides into a moving guitar solo, that makes me weep, obviously recorded “On a mountain high somewhere / Where only heroes dare…”

The Elder comes to a close with Simmons and Stanley trading off vocals in the raunchy rocker “I” that sets up the story to continue into the actual battle. (?) We’ll never know. “Well I’ve got to be the one / I gotta do what must be done.”

For the first time in KISS’s career, everything slots into place majestically. Not a note out of place, not a song out of sync. What happened then?

Elder came on the heels of the KISS disco superfreaks, Dynasty and Unmasked; people believed KISS had committed to that boppy road. If they were to deviate at all, it would be back into the oncoming truck of heavy metal. But no one could foresee how The Elder‘s mature direction would disturb fans so deeply. Harried talk of an Elder movie would be fruitless; even an Elder tour was cancelled due to poor album sales. Although it has probably sold more than 500,000 units to this point, at the time of its release, it was the only KISS album not certified Gold or Platinum. 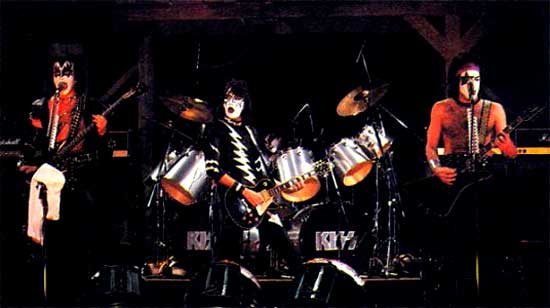 And the makeup – that which they built their infamy on – was also starting its slide into irrelevancy, as felt in the World Without Heroes video. Simmons never sticks his trademark tongue out once, because it’s a somber, poignant piece; the evil tongue is a feature of the bat-demon persona and would be out of place here; also incongruous, at the end of this sad song, we see a single tear issuing from the demon’s eye! – which jolts us to the realization that even the characteristic makeup itself might be out of place here. Might this have been the juncture to AMEND the makeup to suit the wholly DIFFERENT characters they were portraying, or maybe – heaven forfend! – might this have been the time to REMOVE? Who knows? All KISS-tory is hindsight…

How could anyone have predicted the public would go medieval on KISS?

Maligning The Elder has become such habit, nobody bothers or dares to challenge its derogation. The sad thing is that the album’s composers – Gene Simmons and Paul Stanley – deny its quality and agree with their detractors (only because they suffer from that Howard Stern Syndrome of equating lack of sales with lack of worth). And the saddest cut of all is that they are dismissive towards people who value the album. What is the matter with humanity, when such an incredible, poignant, epic journey into the imagination has to endure such disparagement?

Drummer Carr once said he was expecting to come into KISS and play hard rock – and was suddenly faced with the pomp-rock of The Elder. And his new “character” makeup – the Fox – through no fault of his, seemed obtuse. (We start to comprehend Stanley’s point about the makeup having outlived its usefulness: “First we had a fox, then an Egyptian; I mean, what’s next, Giraffe Boy?”) Being the newbie, Carr was in no position to complain – not that he would have, being the nice guy and cooperative workhorse he was. But guitarist Frehley had no such compunctions. He openly slammed this album, and only recorded his parts by having the masters shipped to him, because he couldn’t be bothered leaving his house, his beer and his card games. He listened to the finished CD once, then smashed it against the wall. He even missed a scheduled TV appearance, forcing KISS to perform as a three-piece. (Playing Spaceman’s Advocate: Post 2010’s Sober Frehley states he had no problem with musical direction, and that he contributed much more guitarwork – albeit via sending his recorded tracks, rather than turning up and doing them – and claims much of his work was “removed” from the final product. This, I presume, would make anyone mad enough to throw it against the wall.)

Producer/songwriter/arranger Ezrin (who worked with KISS on their 1976 monument, Destroyer), also dismisses the album as worthless, his excuse being he was doing lots of cocaine at the time. That idiotic excuse might be tenable if Elder was a hot mess, but it is BRILLIANT, COHESIVE SONGWRITING AND PERFORMANCE! Was he any more or less stoned with Floyd during The Wall? Matter of fact, most people blame that album’s excellence – on drugs! 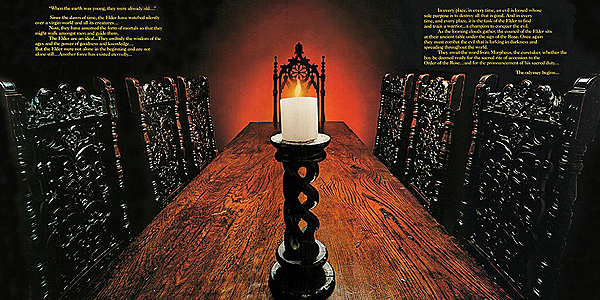 (Music From) The Elder – gatefold sleeve: The Lord Of The Rings meets The Dark Is Rising meets Conan The Barbarian meets Narnia…

Y’know, for all the grief KISS gets for “following trends” (i.e. churning out Dynasty and Unmasked in the slipstream of disco, releasing the epic concept album Elder after success of Floyd’s The Wall, forging a grunge album in the mid-90s to jump on Seattle) … nobody gives them the credit they deserve for being MUSICAL CHAMELEONS!

Do none of their detractors – fans and critics alike – realize how DIVERSE they are? Under the noses of the music industry, they Adapt, Improvise, Overcome trends by assimilating them and then discharging them back at the masses with the KISS mark of the beast! Makeup’s in – DO IT! Makeup’s out – UNMASK! Aquanet’s in – USE IT! Pop sells – PLAY IT! Stanley and Simmons never even give themselves enough credit for being so plastic, so malleable and success-oriented.

It used to be forbidden to even mention The Elder in the KISS camp; at least KISS occasionally throw The Oath into their set nowadays just for kicks. And time has balmed the hatred somewhat, as more and more fans embrace The Elder as the masterwork it is, including the band. Yet we will never forget that dark time when the world asked, “Where is the Bat-Demon?” “Where is the thunderous pawdying? “Where are the big knockers?” 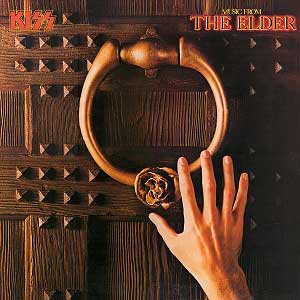 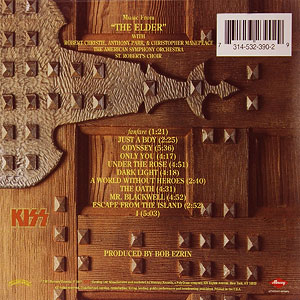 A World Without Heroes ♦ KISS (video)