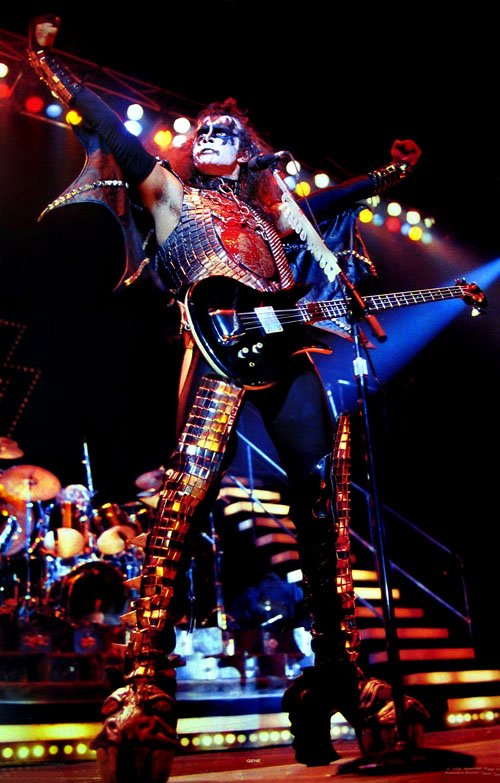 espite opening his 1978 Solo album with a song that suited his demonic persona perfectly, KISS co-founder Gene Simmons then proceeds to jollily stumble along trying to find a cogent direction with his eclectic mix of MOR meets The Beatles. Gene Simmons is a study in a search for identity.

Due to Simmons’ prominence in the media (his visage would come to represent everything KISS in magazines, TV, records and lunchboxes), we were predisposed to favor his album above the other KISS members, believing him to be the “leader” of the band and the instigator of the KISS sound and look. Boy, do we feel like douchebags now! Instead of stealing our souls with a collection of evil-toned heavy pounders that would make us tremble in obeisance, Simmons runs the gamut from ballads to metal and soft rock to operatic rock, delivering a topsy-turvy album that may not be so much a “search” for identity, as a “revealing” of it. A combo-wombo of musical styles that would scour the spectrum and ride rainbows; a paean to being pliable. After all, Simmons himself has told us many times about steak and cheesecake, i.e. That you don’t have to stick to one or the other, but can have both, and/or Sometimes you may not want both at the same time, but can still like them equally, and/or What was the question again?…

All that being said, for pure catchy melodies and hummable ditties and just great rock and roll songs, Gene Simmons runs a close third behind Ace Frehley and Paul Stanley. While he was perfunctorily placed first when I was in bobby sox, nowadays, back-to-backing the KISS Solo albums, we hear the strength that comes from being an extraterrestrial Spaceman and a resolute Starchild. Or maybe just from being guitarists. Gene may not have stretched as far as Peter and suffered Jazz Cramp, but he definitely fell victim to a self-inflicted case of Manilow Monday. 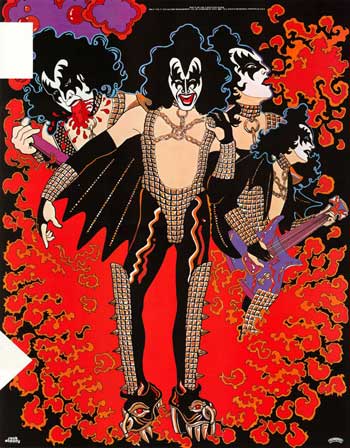 Radioactive is an outa-the-gate stunner, Gene’s voice sounding as powerful and confident as ever, eschewing the demon growl for a high clean delivery. Giving us a taste of something that we would only be allowed to taste in teeny tahny doses on this album – a raunchy electric spanker (with Joe Perry on guitar), replete with a devil’s banquet of horrorshow sound effects that would have sat creamy on The Elder.

Prelude: The opening horror circus is called Prelude, and there is so little information on this 64-second introduction to Radioactive that it probably is an original work, rather than lifted from some 70’s occult movie as I had originally surmised. Laden with chants of “Sanctu!” and womanly choirs of “Hosannas” it is so chilling that it scared many a young listener (myself included), and sets up the album to be more mystical than it could deliver. Rock Magazine tells us it was “…written by composer/arranger Ron Frangipane… According to Gene the introduction was, “Based on some things that he’s heard on the album, and the piece sounds like the themes from JAWS, THE EXORCIST. It’s basically strings, lots of brass, and uh, Janis Ian… singing in Latin… ‘I see no evil, I hear no evil, it’s not around me at all,’ but underneath her is Sean (Delaney) doing a kind of deep voice growl.”

Burning Up with Fever. An excellent discordant acoustic opening (with Simmons whispering, “Lovely!”) heralds this thumping stomper, one of the heaviest songs on the album. Of all the Solo albums, Simmons’ guest list runs longer than his Larger Than Life thingy, including Bob Seger, Rick Nielsen, Helen Reddy, Jeff “Skunk” Baxter, et al. And I think they’re all singing on this song. Well, that’s definitely Donna Summer’s voice back there on those female bvs.

See You Tonite. Did someone say John Paul George Ringo?

On Tunnel Of Love and True Confessions Gene flaunts his love of female backing vocals time and again. Tunnel is metal heavy, while True sports a banging piano and The Citrus College Singers.

Simmons writes and plays electric guitar (not bass) on all songs. Living In Sin is the only co-written song (with Sean Delaney and Howard Marks); the mythos of the rockstar “Living in sin / At the holiday inn,” with then-girlfriend Cher guesting as Outraged Groupie on phone.

Always Near You/Nowhere To Hide. This segued twosome is another experiment, in soft rock and epic rock juxtaposed.

Mr. Make Believe. We do a double-take: As the acoustic plucks the intro, it almost sounds like the intro to Frehley’s masterpiece on his Solo album, Fractured Mirror. No, just an easy-listening cockle-shell, with Simmons foraging in falsetto and cleancut MOR. As on later releases (Childhood’s End 1997, We Are One 1998), Simmons displays a knack for capturing a nostalgic drift.

See You In Your Dreams. Who loves this mediocre track from Rock And Roll Over so much that he re-recorded it for his solo album? THIS guy! Gene’s vanity project is bombast times two, with female backing vocals, added repeated verses, angry bees guitar solo, and lots of background noise like someone left the isolation booth door open when they pressed Record. He extends the 2nd verse, longer than the KISS version – and if you are wondering what profound lyrics Gene was sitting on for two years just waiting to get back into the recording studio to finally nail them into place in this masterwork, well, you’re in for a treat. Here are the extra lyrics to Verse 2: “I love you / You know I do / Take me home tonight / Think of me / I think of you / Baby baby, it’s alright!” Phew. Creativity. Workmanship. Craft. Passion. Nowhere near this dog of a song. This song won in the category for Most Banal Lyrics On A Recorded Work By An Adult Male.

When You Wish Upon A Star. People will mock and deride, people will scratch their heads, people will call Dr. Love for professional therapy, but Simmons bravely takes a Disney song (from PINOCCHIO, originally sung by Cliff Edwards, written by Ned Washington and Leigh Harline) and, with an orchestra backing and a hitch in his voice, croons like a jiminy cricket, accompanied by a chorus of chipmunks and fairies.

Though it bares Simmons’s soul, revealing that young Jewish immigrant, eyes filled with wonder in the theater dark, mind agog with dreams that could only be pursued in the Land Of The Free, we now know that “If your heart is in your dreams / Nothing else is too extreme…” can only be applied in hindsight. To those who “made it,” those words are as magical as wooden boys coming to life. To the rest of us – utter bullshit. And the writers of that song should be tortured slowly over a spit for creating such false, outlandish expectations with that line alone, let alone the rest of the song that means absolutely nothing. But enough about my three failed record deals… When sung from the POV of the bassist in the biggest band on Earth at the time, it all makes perfect fucking sense. 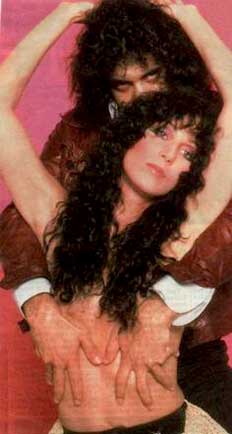 When Gene dated Cher, the makeup was still on – so No Faces in public. Or tennis ball ta-tas.

Gene Simmons would “ship platinum.” There is constant contention over the actual sales of the KISS Solo albums because before Nielsen Soundscan (instigated in March 1991), not only was there no standard system in place to track record sales, Gold and Platinum designations have changed over the years. Originally, a Gold single meant one million units sold, then in 1976, the RIAA (Recording Industry Association of America) stepped in and standardized Gold as 500,000 units (album or single), and Platinum as one million units (album or single). A Gold ALBUM prior to 1976 meant $1 million in SALES not units. So you can see how the whole mess got outa hand. Which is why no one can figure sales and status of KISS Alive! (1975).

Casablanca Records spent $2.5 million in marketing for the four KISS Solo albums. The gigantic, albino, hairy African elephant balls on CEO Neil Bogart! To even think that FOUR members of the same band releasing simultaneous albums would be a marketable viability is either the height of hubris or stunning foresight. The only reason they were a loss is because they printed too many; they should have shipped them in response to demand, rather than greedily ship 1,000,000 copies of each to record stores nationwide. Still, what a powerhouse statement! History will record this actually happened – and no band has done it since! The albums all sold respectably, and we hear they’ve been “certified platinum” – although, like When You Wish Upon A Star, I’ve given up trying to figure exactly what the hell that means… 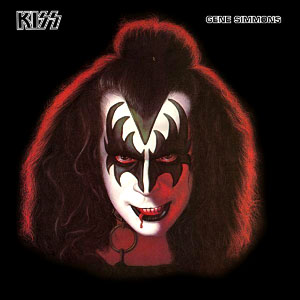 (All songs by Gene Simmons, unless noted.)
1/ Radioactive (single)
Burning Up with Fever
See You Tonite
Tunnel of Love
True Confessions
2/ Living in Sin (Simmons, Sean Delaney, Howard Marks)
Always Near You/Nowhere to Hide
Man of 1,000 Faces
Mr. Make Believe
See You in Your Dreams
When You Wish Upon a Star (Ned Washington, Leigh Harline) 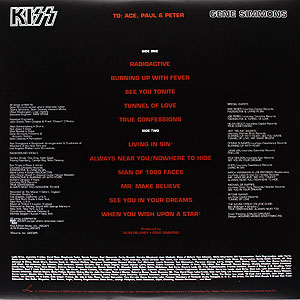